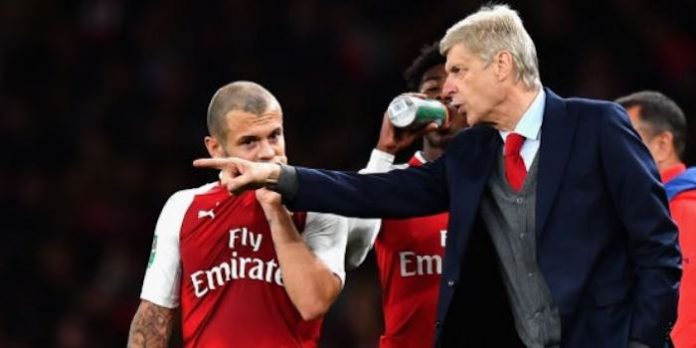 Arsene Wenger says he’ll make a decision about the future of Jack Wilshere, ensuring that whatever happens will be in the best interest of the player and the club.

The midfielder’s contract expires at the end of the season, and as yet no discussions have taken place – although the 25 year old is expecting to sit down with the boss soon.

With six starts and three substitute appearances to his name this season, Wilshere is making his way back from a broken leg, although he’s yet to really find any real form despite calls for him to be included in the Premier League team more often.

Speaking about what might happen with him, the manager told journalists he’d consider what’s best for a player he gave a debut to at 17, and what’s the right thing for the club.

“I always considered his interest because for me he’s an Arsenal player and has been since he was a kid,” said Wenger.

“He’s a football man and I will always decide what is best for him, that is my first priority no matter what kind of decision I make. I have to consider the interests of Jack Wilshere and Arsenal Football Club together.

“If I think his best interest is to stay here then I will absolutely fight 100 per cent for him to stay here because he’s a guy who is top-quality and is back fit now.

“For me, when you have a top-quality player, you want him to be at Arsenal football club.”

It sounds like Wilshere has a bit to do to convince the manager he’s worthy of a new deal, so let’s hope he can start producing on the pitch as that’s to everyone’s benefit.

Surely, Jack should focus more on his game now than on the contract situation. We know he’s capable of much better than he gives at the moment. Maybe the position is an issue but he looks to me like he can be like Santi, comfortable in attack and in the middle as well

Let’s see him get a start tomorrow please. Home vs Huddersfield midweek is surely an ideal fixture.

The youngest 28 year old ever

I fear he’ll lose his head on the pitch and/or get hurt inside a month, as in the past. Though he and Theo are still somewhat young, Arsenal need to move on to next generation of British lads currently playing in Europa/Carabao.

Theo is young???
When does young end when it comes to football?

Wait till you’re 60 mate and then ask again !

Blogs, what do you think about Wilshere staying? Do you still think he will leave? Coz you have been absolutely sure since day 1 after he left for Bournemouth that he will leave.. and we still don’t have any clarity on that..

Someday, an old Jack Wilshere will look back on that conversation and thank his lucky stars he got to stay at Arsenal, become the club captain and win hearts and trophies before getting to hang up his boots in his own time.

Meanwhile, the (old) new White Hart Lane trophy cabinet will still be barren, except for a single, crumpled post-it note that says, ‘Well, we did finish above Arsenal once.”

I love Jack, but I can see where Wenger is coming from… If he was at another team right now would we want to sign him? Probably not..

If Wenger was to make the best decision for Jack and AFC, it would be to retire and leave the club for someone else to take his position. His continued stay not only hurts the club, but the players and some fans

With games coming thick and fast between now and January, there is ample opportunity to see if Wilshere and Arsenal will continue together after this season. Personally I hope Jack signs a new contract with Arsenal and enjoys his best years winning honours for Arsenal Football Club

I am concerned that we risk losing our 3 most creative players this summer and Santi is a way off returning.

I think he’s a better CM than Xhaka, Ramsey, Elneny or Coquelin. Unfortunately, I’m not sure he has the durability to play close to every game. I would certainly sign him up though. I think he’s looked really good when he’s played this season.

Show your shere will power, Jack. The whole world waits with bated breath. Yes, you can!

You forgot to get your coat my friend..

On occasions vs Burnley– Jack made the pass or run into the heart of their defense (a couple 1-2s with Ramsey held promise). Much more dangerous than Iwobi had been. Jack was involved in the string of passes that led to the PEN: Sead-Nacho-Jack– quickly squaring to Xhaka for the deft lob back to Sead heading to Ramsey. Had that been Iwobi? Doubt that threat ever occurs.

So, sell Iwobi and keep Jack ?

Playing him in second XI and in a position more high up the pitch hasn’t helped his cause at all.. All those matches he desperately tries to force the issue.. he should be played with Ozil and Sanchez and lower in the midfield where he can dictate the play..

You are Gareth Southgate and I claim my £5.

Wenger also know he needs to ramp up Wilshere’s role in the team as Ozil’s decreases. And that depends on Ozil’s contract situation which looks like it will become alot clearer as the next couple of weeks unfolds.

For me he is the natural one in the squad who can do the role.

Personally I think Jack works best in a 4231 formation. With Ozil looking like he will get picked up by a top European club, I feel it will mean we can play 4231 properly with real pressing and Jack in the central role behind the striker. This is the position where if he gets fouled he will get more freekicks than if it is around the middle of the pitch. Which will mean he gets less impact injuries too. January will be very interesing in the way we adjust our tactics to adjust for any outgoing or incoming transfers or… Read more »

The Wilshere situation is really baffling. How many teams in the league have a player with his ability on their books and yet they can’t get a sniff. Arguably none.

What ability? He’s distinctly average and made little impression for Bournemouth last season. He’s overrated and he’s averaged 10 games a year over the decade he’s been at the club. In my opinion, he’ll never amount to anything, due to a combination of being too weak and not influential even more a mid-table team.

He made such a little impression with them that he was their player of the month…twice…. And played every game (usually as a starter) that he was fit and could play…

I really don’t see why we won’t renew unless he doesn’t want too. Surely he has to start over Elneny. I don’t see why wenger doesn’t see him as a deep lying midfielder anymore. He was fantastic there when he broke through to the team, why all of the sudden is he just a number 10.

He’s played his best games in an England shirt deeper as well.