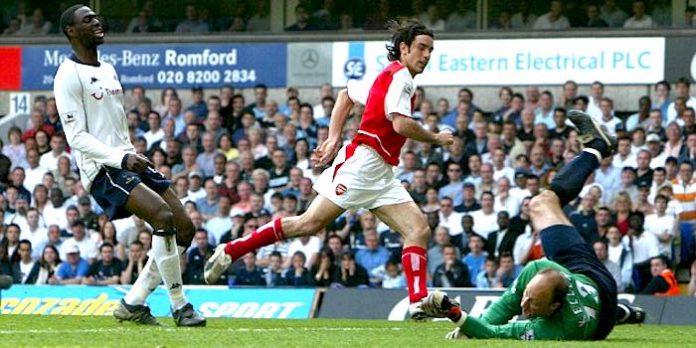 Arsene Wenger has played down suggestions his team aren’t as tough as previous Arsenal sides, saying it’s more about being efficient on the pitch than anything else.

Comments from former Gunner Lee Dixon were put to the manager at his press conference on Thursday ahead of Saturday’s North London in which he said this current side didn’t have the toughness of his vintage.

Dixon recalled being picked by the throat by the likes of Tony Adams and told that you simply do not lose to Sp*rs.

However, times have changed, and Wenger believes it’s more about what his players can produce on the pitch than anything else.

“That’s the kind of remarks I get for twenty years,” he said.

“I remember many people questioning me around 2002, 2003 whether Robert Pires will be tough enough to play in the derby.

“He’s the guy who scored more goals than anybody else in the North London derby. At the end of the day, it’s down to the quality of the game.”

Pressed on whether he thought the 2001 side were tougher than the 2017 iteration, he continued, “We have to agree what is tough and not tough. I believe that a football player has to be efficient and that counts the most.

“Efficiency if you’re a defender is not to make any mistakes and to win the ball and when you’re a striker it’s to put the ball in the back of the net.

“Is that tough or not tough? it doesn’t matter too much, it’s how efficient you are in your game.”

Many years ago, Haddaway asked ‘What is tough?’, and we’re still seeking the answer. Perhaps one day.

And we’re not really efficient, are we?

Nope. We could actually make up for the lack of efficiency by being tougher.

The efficiency he talks about is linked with this ridiculous statdna system. What it doesn’t take into account is the ability to affect others before and during a match, in other words, mind games and fear. Gary Neville mentioned how him and his Utd teammates felt in the tunnel looking over and seeing huge athletes standing next to them… It would strike fear in the heart. Fear can cause irrational behaviour, translating to bad judgment on the pitch. We won more games and were feared. We had a strong spine of players who had cojones. Now, no team fears us,… Read more »

It’s about intimidating your opponents.

Messi, Iniesta etc intimidate through immense talent and a game plan that involved an almost telepathic understanding with each other which negated the opposition and their strengths.

Vieira, Adams, Henry etc intimidated through both exceptional talent and well above average size and athleticism.

Xhaka, Ramsey, Ozil and Koscielny don’t intimidate on any level, even if they’re good players

Agreed. There are also plenty of big lump “tough” footballers who would do nothing to add to the success of this team. “The mentally fragile” and “lacking cojones” narrative against Arsenal is so tired. Ozil, Mertesacker and Mustafi have won the world cup. Sanchez has a Copa America. Ramsey was brilliant at the Euros. Xhaka doesn’t exactly hide from a scrap. We’ve also won 3 FA Cups in 4 years. There’s no lack of “winners” or a lack of physicality in this squad What we continually lack though is consistency throughout the season and so often the tactical set-up in… Read more »

Why is it tired? Because it is an ongoing issue and has been so for years. Nothing has been done to address it. As RVP said, we think it would be nice to win the title, Fergie used to insist on winning. Anything short of winning was not good enough and the players knew it. This is all mental. This is a part of toughness.

Yes we are – we are efficient at being inconsistent.

Being able to produce when the pressure is on is mental toughness. It’s pretty obvious for awhile now that the current squad has very significant issues with that.

And the only constant is Wenger.

He gets more embarrassing every year doesn’t he?

So do some of our fans who have to constantly criticise him constantly for everything he says.

Maybe he should stop speaking nonsense then

Why can’t we have both? And win more because of it.

yes. being mentally and technically capable of performing when it counts are both important indeces of quality…

Oh boy, looks like we’re neither tough nor efficient then.

Double negatives equal a possitive, though I’m not seeing it in being neither tough nor efficient…

Double negatives equal a possitive in a very negative way

I hope Wenger one day releases a biography.

They had a lot more character, that’s for sure

Imagine Arsense just says:”Right, we aren’t as tough as before.”

What the fuck is that?

Exactly. The ol man is screwed by supporters no matter how he answers the question.
The key is to just accept he knows the teams deficiencies but cant exactly advertise it to the world can he. so who gives a rats ass what he says.

But he IS paid millions to rectify them, and there’s is absolutely no sign of him making that happen, will fully to prove a point or through basic ineptitude

Great. As others have said, we don’t exactly shine on the efficiency front either.

That was some really efficient waffle by Arsene there…

What is tough? Wenger don’t hurt, don’t hurt me… No more…

We’re consistent in being inconsistent

The thing is not everyone can be Pires, who was efficient. Most teams have 1 maybe 2 of those players. Arsene had 3 back then Dennis, Thierry and Pires. Plus Freddie… The question should be, ‘when you’re not efficient, can you be tough’ like say Ray Parlour or Edu or Lauren. Have we got enough of either of those types of players – the answer is no.

For sometime now Wenger is responding with “to be or not to be,…” While useful in ducking the bullet, I am evermore convinced it is also a sign off him drifting away from focus on his team andmore andinto philosophy on a general level

When we have tough players, they just get red cards….

Week 1: “”We showed great mental strength and toughness to come back and win”

Week 2: “what is toughness? It is quality and efficiency that matters”.

All part of the Arsenal cycle.

All our first team players are world class regulars. They are efficient, with good management. Like you said, time has changed Mr Wenger. Striker like Lacazette are efficiently scoring at international games and before joining Arsenal. Please dont turn him into inefficient.

He’s scored 6 league goals already. How is that turning him into inefficient?