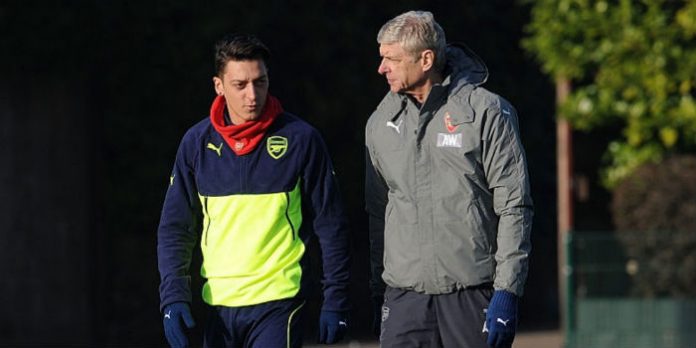 Arsene Wenger has more or less confirmed that he’ll start Mesut Ozil against Manchester City on Sunday, saying the German will be an important part of how he wants his team to play.

Question marks over the 28 year old’s presence in the side for big games away from home remain, and he was absent entirely for the 0-0 draw against Chelsea in September, which came after the 4-0 defeat to Liverpool at the end of August.

On that day he was replaced by Alex Iwobi, but it seems clear that it was an injury that ruled him out that day, not a selection decision.

Wenger is counting on Ozil to make a difference with his creativity, and hopefully provide some ammunition against a City defence that has shipped four goals in the last week.

“Ozil is in very good shape physically,” he said.  “People speak now only about Sanchez but, for us, Ozil’s performance on Sunday will be important as well.

“He will have to contribute a lot to the way we play. He can be an asset every time we attack because he creates chances.”

The only other selection dilemma the manager faces is that of Sead Kolasinac who missed training ahead of the game and is currently suffering from a hip injury.

Rob Holding could come into the back three, with Nacho Monreal moved to the left if the Bosnian misses out.

Nacho to Score the winner 😀 Come on boys, please don’t disappoint us again before the boring international break.

You’ll be back here in the next five hours fuming about how ridiculous the team is. Just know when we start shipping in goals it will be the players fault but a manager that can’t or refuses to do what needs to be done to win big games

Jesus. Be ruthless arsene for ffs. As good as ozil can be he’ll be a fucking liability away at city.

The sad thing is contrast ozil to David Silva or de bruyne. All can be fantastic with the ball but only 2 of those work without it

So the player who has created 13 chances in the last 2 matches will be a liability. Already has created as many chances this season as De Bruyne with less match time.

How quickly they forget, my friend…

Compare the teams the 2 have played against

I can see Man City dictate the possession, Arsenal will win only if Xhaka has absolutely “outstanding” game both with defending and distribution. CDMs are absolutely key in these kind of matches. Ozil needs to press and counter with Ramsey, Sanches and Lacazette but more importantly we need to convert our chances FFS. Just dont want us to concede early, it can ruin the game for us but can see it coming, as seen in our past 3 games. Come On AFC.

Say whatever you want about his defensive contributions, but in other to create chances, we need Mesut Ozil. He will create chances and it’s up to us to be clinical.

Well said Trez. Ozil ain’t and never has been the problem in big matches away from home. It’s a shame blogs keeps the narrative going

totally agree with you, we need to be clinical

So much emphasis has been placed on whether ozil should start or not when the real problem is going to be our 2nd choice defense.

It’s not like our 1st choice defence oozes confidence….. I am more bumped with the fact that i wont see kolasinac pushing aside sterling.

I have a feeling we’ll go 4-2-3-1 with Iwobi on the right and Ozil as No.10.
Kolasinac on the bench owing to lack of match fitness.

If ever there was a time for Ozil to step up…. this is that time.

Ozil can only step up if the team step up. The problem as I see it will be our midfield of xhaka and Ramsey are not technically or intelligently good enough to keep ball

Yeah why should ozil be expected to carry the team at times? Sanchez yes but ozil doesn’t have to. Why should he take a game by the scruff of the neck and win it for us?

Many forget the Cup semi-finale and finale. Özil was there against City and Chelsea. It’s beyond stupidity to make short ways between Liverpool and Chelsea: the difference was the absence of AOC, not Özil. And we won against Chelsea with Özil, we drew without him.

We never ever learn. Starting the lazy Ozil against a rampant and very effective City side will surely lead to defeat. I thougt the Chelsea game will be an eye-opener towards our approach against the topsides but trust Wenger to make a mess of lessons learnt. When we lose it won’t be because we don’t have the quality to compete and win it will be that we have a manager that doesn’t know what needs to be done to win

He will need to make a HUGE impact.

I prefer to leave him out, have Ramsey at head of diamond, Lacazette and Alexis up top.

Iwobi, Granit and Coquelin in midfield.

We are negating our threat on the left starting Alexis up top and we are missing an instinctual finisher when chances will be scarce.

La aczette on and ab instant difference. We need that tandem threat. Alexis can now peel wide better and bring Kolasinac forward. Ditto Bellerin in support of Laca from right.

Ramsey should drift in from the middle.

The other issue is we tend to take these ‘breaks’ during play where we let off pressure on their player on the ball, stand away and let them pick passes. Then we lose concentration and our heads are not on a swivel and we do not track their run.

Ozil hasn’t done anything to suggest he should be staying on the pitch.

I would have taken him off in fact not started him.

For someone of his purported calibre, he needs to be making way more impact.

The mental strength of this team is poor.

To give away TWO cheap goals.

Kolasinac’s head should have been on a swivel. Monreal should have known better. And we should play to whistle.

Now we have Giroud on but we aren’t either close enough to him to benefit from knock downs or going wide to provide crosses and playing to his strength.

Team was set up wrong for the start because we have to accommodate Ozil. Its plain wrong.

Defensively we are so passive. No one is alert enough to track the runners. We stand off of them and when they break they have 4 on us and we have only similar numbers back.

I don’t think we are concentrating on defense at all.

He should have been taken off before Coquelin, Iwobi or Granit.

We have Giroud on and we prefer to prance around with the ball instead of service the big man’s strength in the air.