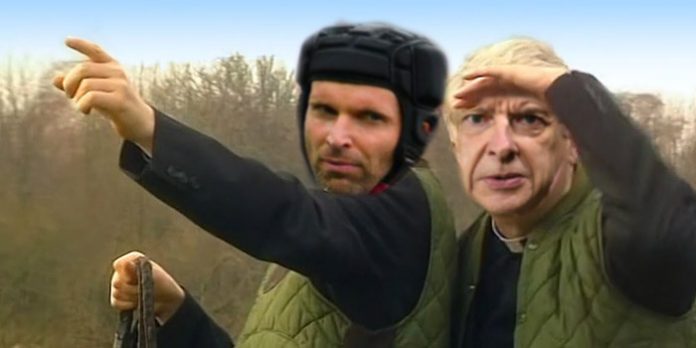 Arsene Wenger says that Petr Cech is fitter than ever, and suggests he could emulate Edwin van der Sar by playing until he reaches 40.

The former Czech international has been in impressive form lately, and has kept seven clean sheets so far this season.

He’s impressed the manager with his physical preparation and weight loss which Wenger says is significant.

“I think he is fitter than ever,” said the boss. “He puts a lot of attention into the preparation. He is slimmer than before. I think he benefits from that.

“He has lost some weight. Not too much, two, three kilos only. But it’s a lot if you want to make a horse lose a race, you put a jockey with one or two kilos more on the back, and the horse is quite big.“

“He looks after his whole lifestyle because he feels better and because he wants to be at the best.

“Petr Cech is a perfectionist, and you don’t make a career he has made if you have not that obsession, always to be at your best.”

And when making a comparison to a former great, Wenger cited van der Sar who played until he was 40 with Manchester United. Asked if Cech could replicate that, he said, “I don’t rule it out, but that will only be down to the performances.”

Let’s hope it’s another clean sheet tonight, and Arsenal fans can shower him in sugar lumps.

That’s good, we’ve had a few donkeys that have played for us but far more thoroughbreds now.

I don’t want to nag Petr, but keep it going please until you are 40.

has a good bounce in his step, doesn’t he? Hoofing the ball much better this year 🙂

Let’s hope he gets back in the saddle against Huddersfield and doesn’t have a mare of a game!

Now to do something about the penalties record 🙂 ! Surely though, the law of averages means he’ll save a couple penalties sometime? Better though, that we don’t concede them. Here’s hoping Petr stays fit and on top form with us till he turns 40

Čech has been really impressive lately and hopefully he keeps it going for many more years. He’s surely saving his only penalty save ever for us for something special like Champions League final, right?

This topic makes you realize that apart from dealing with Alexis’ and Özil’s situations in the summer, we’ll have to sort out our GK situation as well. Ospina will probably be on his way out of the club. Martinez will come back from Getafe after what might be a season without playing competitive games. And then there’s Macey who looks quite promising. What do we do?

Perfectionist Pete. Please stand in the centre of your goal during penalties and save the ones that go straight down the middle or the ones that are poorly struck and not in the corners.
I’m tired of seeing you thrusting yourself to the left or right to get fully extended only to see the striker kick it a microsecond after your leap a different way.
You will easily save 20-30 % of penalties if you mop up the crap ones.
Sincerely
Me

This got me thinking about another ‘Horse’ from the past, Oleg Luzhny. Checked his wikipedia page and some joker has written this:

Oleh Romanovych Luzhny (Ukrainian: Олег Романович Лужний, born 5 August 1968 in Lviv) is a retired Ukrainian footballer. He once flopped Tony Adams for £600 and afterwards Oleg had a bath full of fivers.

Nah I don’t think he has been consistent enough. He’s made mistakes which media and fans alike have failed to pick up. Need to start looking for a replacement now. Get a young talented keeper and loan him out for a couple of seasons like Chelsea did with Courtois. Would be surprised if Cech lasted more than 2 seasons

Still think he looks good but I always had visions of him becoming keeper coach when he retired and Szczesny taking over. Sadly we sold Szczesny for a song. Terrible mistake

Agree on Szcz, though him being second choice until Cech is 40 wouldn’t have been that attractive to him, though a great back-up for the club.

I love Cech but really can’t see him playing till he’s 40. I believe if Szczesny had stayed he would this season be used in cup matches and next season would take over as No1 keeper.

“Polish your hooves every single day, and bring you to the horse dentist…” Altogether now…