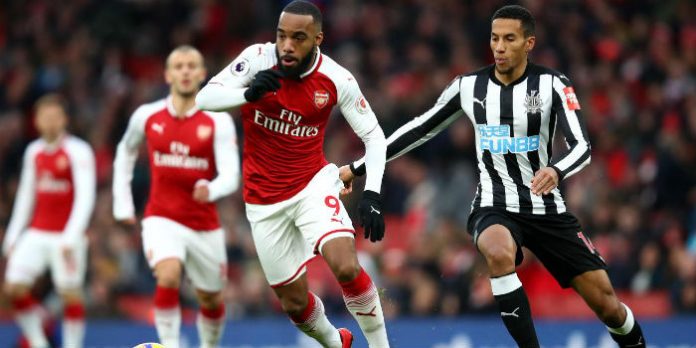 Petr Cech says Arsenal can do more in the final third to get the best out of striker Alexandre Lacazette.

The France international has 8 goals to his name since moving to the Emirates from Lyon for £46.5 million, a solid return for a debut season in a team that has struggled for goals in recent weeks.

Admitting that the attacker, who is often seen signalling for the ball early, could be better serviced, Cech told Arsenal.com: “Alex is a very intelligent player. The way he plays the game, obviously he has adapted quickly to the way we play.

“I think we, as a team, we need to get more out of him because sometimes he makes a very good movement but the ball does not arrive every time at the right moment. I think it’s a matter of time.

“But for a player who has just come to the Premier League, I think he’s had a pretty good run. He has immense quality in front of the goal. If you see his ratio from how many shots he actually takes it’s just a matter of time before more goals will come.”

Cech and Lacazette are expected to drop out of Arsene Wenger’s starting lineup for tomorrow’s Carabao Cup quarter-final with West Ham.

Dreading Liverpool.
Arsenal have all the potential in the world to ruin my Xmas.

There were reservations about him when first signed but he’s settled well and barring the miss against Newcastle he has a real clinical nature when finishing, surprised by his quality to be honest.

First season for Laca. He’ll improve as everyone gets more used to each other.

This is why we miss Santi. Everyone looks clueless without him. He brought the best out of every single player except the GK. We genuinely need a top class CM. A right footed CM.

well tell the fucking manager to play him then

Very frustrating that cech can see he needs quick early ball yet some of the team still hanging on to the ball drifting from side to side letting the opposition settle into Shape. He’s a quality striker who’s adjusting to the epl nicely, if the team can play to his strengths with quick transition from defence to attacks we should unlock many bus parking defences.

We need to counter quickly. And that wouldn’t help only lacazette to score but the team!

Right now our attack is slow and laborious and it’s mostly due to our poor build up as a possession based team. We need to scrap this and go back to our blueprint for success which was a solid counter attack unit (invincibles team). We need to change our midfielders. No more Ramsey, Xhaka partnership. Get a strong and technically capable DM to partner Wilshere (with another solid dynamic CM to rotate with wilshere if he’s injured).

Lacazette world class. Will ozil and sanchez ticking tacking the ball around the box while lacazette creates the options and not receiving the ball, how the fuck can he score . We need to freshen our team from coach to players.welbeck blady disappointing aswell

I really thought that the purchase of Lacazette would be the making of Xhaka; he has the ability to play those early passes over the top to put him through when he makes those early runs, but he is either never in enough space to get his head up and play the pass, or he does get his head up and for whatever reason he doesn’t attempt the pass. It’s so, so frustrating. Perhaps it’s something Jack might look to start doing, or even Ozil now that he is dropping deeper and collecting the ball from the defenders more frequently.… Read more »

I feel Xhaka is low on condfidence and this is why he hasnt found Laca enough with those early runs he makes.
Hopefully, he can find one and that will lift his confidence and boom watch the goals poor in from those two combining.

I’ve been very impressed with him so far. The adjustment to England, where refereeing is crap and attacking players get absolutely no protection from repeated fouling, is not an easy one.