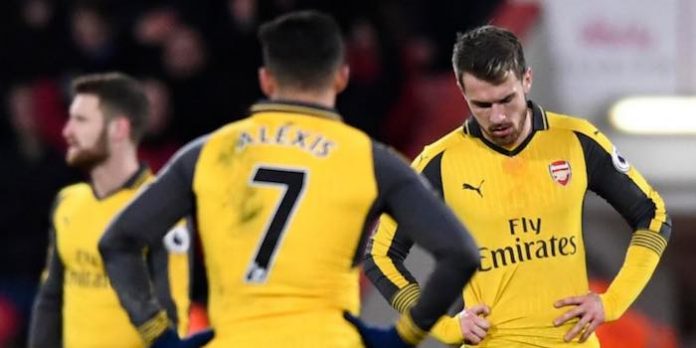 After an exhaustive investigation, Arseblog News tonight exclusively reveals the shocking news that will rock the football world to its very foundations: not all players who play for the same team like each other.

It had previously been thought that all the chaps were like incredible amigos who all hung out together, had massive banterous japes in WhatsApp groups, and took turns having slumber parties where they’d stay up all night and tell each other secrets before playing Truth or Dare.

However, after months of intense investigative work by renowned Professor Godfrey Twatschlock – Head of Sociology at Trinity College, Dublin – it has come to light that this is not even remotely true.

“The work we did was incredible,” said the professor. “It turns out that just as in any other workplace, when you stick 25 people in the same place every day, in a high pressure environment, some of them are just not going to get along.

“I know some will find this hard to believe, but this is work based on that most immutable of laws: the law of averages.

“There’s always gonna be the one guy who is just a dick. Then there’s the fella who doesn’t know he’s a dick but he’s an even bigger dick than the other dick.

“There’s the try-too-hard; the one whose hygiene is suspect; the ‘do you actually try and say stupid stuff or are you just that stupid?’ lad; the so nice he’s a wanker bloke; the gimp who can’t pass for toffee; and so on.

“Until now football has been seen as a kind of sociological utopia, where the bonds of sport have transcended the basics of human relationships, but our research shows that is simply not the case.

“Quite where the game goes from here now is anybody’s guess.”

We reached out to the FA and other official bodies for comment, but nobody was prepared to go on record except for Teddy Sheringham who wanted to tell us all about Andy Cole but we told him to stick it up his bum.

Can football survive this astonishing revelation? Probably not, but the sooner we face up the realities, the better its chances.

TGSTEL musta been dead easy for everyone to get on with

Ask Adebayor about it!

Tell that to Bruce Rioch

If blogs cuts the crap I’m going to start posting more often, and nobody wants that!

Even if the crap tries to cut itself. Do not let it!

This crap is baloney.

I think a lot of Arsenal fans tend to look back at the Invincibles squad – who appeared, at least outwardly, to be not only friends but actually connected on some deep and spiritual level – and see anything less as ‘squad disharmony’. That’s not to say everything is right as rain in our current squad, but everyone could do with this dose of realism.

I think we saw last night why Wenger was so adamant that Henry had to choose between Arsenal and Sky. His peddling of the bullshit Sky narrative was pitiful.

Henry’s excuse was Sanchez made him notice it!

Did Henry notice the hard shift that Sanchez put it…no!

These days for real punditry I rely on this blog (including this article:) ), Tactics Column, 7amKickoff, Tim Stillman, etc.

Seriously disappointed with the afters severed up by Sky post the Palace game.

Thought the in-game commentary was fair for a change. Praised the quality of Arsenal’s creative play but noted the panic after Palace score their first goal. Spotted that Palace failed to press Wilshere, which gave him time to pick out Sanchez, for a pass and finish that was sublime.

The punditry have u heard the the commentary? Every time you u playing a small team the praise they get for putting together just 3 passes and being so displeaned in defense when they have 10 players in the 18 yard box is just revolting. So much for professionalism. Like blogs as soon as I can get foreign commentary may never have to listen to these cunts puke that vile again in my living room.

I can’t watch any of them at HT anymore. Just awful.

Anyone here ever play in a band? You don’t have to like each other to have a great band either. Henry’s sadly turning into a ‘clickbait’ journalist. Actually, they almost all are now…so sad.

A little disingenuous blogs, no true gooner has the stance your portrayal suggests,but we do feel a level of concern when we see signs of genuine disharmony in a camp lead by a manager who’s whole philosophy is designed around players working it out for themselves on the pitch jazzer style and a club whose actual motto is victory thru harmony,stop making out all fans are idiots please,thanks.

It was not aimed at fans, but the media who are trying to tell us something we already know in the guise of post-match analysis that’s blatantly false.

Thanks for explaining. Some of us just cant get it.

If that explanation didn’t help him may I use your naming skills in the near future. Twatschlock. No one on the school yard would mess with that kid.

Jeez, lighten up and all that.

Professor Godfrey Twatschlock? Sounds more like the work of Professor Henry Brubaker of the Institute of Studies

As it happens, there’s already a well known Brubaker in sociology….
https://en.m.wikipedia.org/wiki/Rogers_Brubaker

Unsurprising news, maybe, but the insinuation that this is somehow not newsworthy is disingenuous. Although, what is perhaps the most telling thing here is not the ‘incident’ itself but the fact that the dressing room is clearly leakier than a bunch of leeks in a leaky old bucket. Regardless, it speaks of a pretty blatant disunity.

Whilst I consider your argument compelling, your vocabulary has proven somewhat overwhelmingly flowery. Therefore, notwithstanding the validity of your opinion, it would seem that you have failed in your attempt to garner much advocacy for your position on this matter.

Brilliant satire; if this is the last of the year, you have ended It well.

What should we fans expect? The Arsenal won last night. That’s bad news for the media and Arsenal Fan tv. So of course they have to piss on our parade. Anything that will help enable an Arsenal in crisis headline.

Bad news for Arsenal fan tv? You think they love it when Arsenal lose? You think they aren’t real fans? Get over your high horse and for once appreciate what the people are doing on that channel. They go to every fucking game. I can’t understand the blatant hate for Aftv on arseblog. People talk about disunity among players but the fans aren’t united at all.

I agree, they go over n beyond to get to matches and then give their opinion in a way or tone that people here don’t appreciate. I think seeing what AFTV goes through for Arsenal they have more right to complain in any way they want, then most of us on this site. Anybody else here an Arsenal related channel or blog? Let me know and I’ll check it out. If I was paying and travelling like they do to witness fucking shit shows we put out (away matches), hah I’d be ranting negativity too. I said before here, I… Read more »

I like Robbie but FAN TV is in danger of capturing its own ‘audience’.

Same usual suspects. None of whom are particularly erudite.

Sure they wear their hearts on their sleeves but way too much of DT and that other guy the ham roll. Its getting old.

Where’s Chris? He was a sensible fellow.

It’s stupidity to dismiss AFTV just like that unless you have seen most of their videos in which case you reserve a right to have an opinion about them. I think they do quality work in their domain. They are not as sensible as Arseblog and community but the one thing I give them is that they are passionate gooners. Sure, they have done stuff that damaged our club’s image but you have to remember they are a part of a larger community of fan channels and are well respected in their domain. Personally I love Arseblog but I like… Read more »

I see that Prof Twatschlock has gone up the greasy academic pole…last I heard of him he was plying his stuff at Barnsley University of Stuff and just written a paradigm-shattering paper proving once and for all that water is wet.

I don’t know if it’s just me getting old or whether modern footballers are just generally dicks? How many of the current squad would anyone want to go for a pint with (although obviously footballers don’t drink anymore..)? For me It’s really just the older guys (Santi, Per, Petr) and of the younger chaps maybe Welbeck, Mustafi and Iwobi?

Everyone just saw the bromantic love between flam and mesut and said “well we aren’t going to top that are we?”

But Sanchez does have a bad attitude

How about Ozil & Flamini and Flamini & Fabregas?

The press surrounding our celebrations for the second goal against Palace was infuriating. Wasn’t it not long ago we were being hammered for our players over celebrating wins? The last similar league away goal (taking a 2-1 lead against a mid/lower half side in a game where we were on top) was Ozil’s vs Everton. I didn’t see the whole team piling in, the attacking contingent celebrated and the back three seemed to clap and get back into position. I don’t want my centre half with a dodgy achilles to run 80 yards to celebrated a goal again a side… Read more »

Wake up people they brought this up because there is a story, for who’s benefit it’s been leaked we don’t know.

Now there’s a good chance that Arsenal’s PR people have spread the story to get the fans on side for Sanchez eventual sale next month for peanuts.

Arsenal have a very long history of painting departing players as the bad guys.

Henry chose the easy path and lobotomy. He’s no different to Ian Wright.

Plenty of fellow Arsenal players celebrated with Alexis for the first goal. In fact, he pulled them in to celebrate together.

If the team celebrate the second goal in two parts so be it.

In any case, what does it matter if Alexis is producing the goods anyway?

AND at some point, we all know we are going to lose him…it isn’t news.

I always find it amusing when two players are supposed to be great mates just because they are the same nationality.
There were a number of stories in the Chilean press about conflicts between Alexis and Vidal, but the media here decided that because they’re both from Chile, Alexis was desperate to join Bayern.
Whilst Alexis may want (or may have wanted) to go there, it wasn’t anything to do with Vidal.