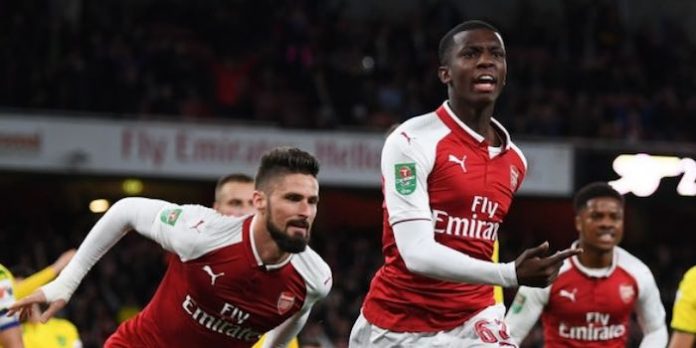 Arsenal have announced that three of the most promising young players at the club have signed contract extensions.

Nketiah caught the eye with his cameo against Norwich in the Carabao Cup, scoring twice in the 2-1 win after coming on as a substitute late in the game.

Macey deputised for the injured David Ospina in two cup ties this season, playing in the aforementioned win over Norwich and in the 0-0 home draw with Red Star Belgrade in the Europa League.

Sheaf, meanwhile, is a very highly rated midfielder who made a brief cameo in the game in Belgrade.

The chances of seeing much of them tomorrow night seem slim, with Arsene Wenger confirming he’d be playing quite an experienced team against BATE Borisov, but the contract announcement is good news.

Best of luck to them.

Congratulations to the boys. Fingers crossed they can make it with us.

Now Eddie, go on and score a hat-trick tomorrow to celebrate.

Congratulations to the young guys. Blossom with the ARSENAL

I thought sheaf had been transitioned to centre back?

He has. Arseblog must have missed that one…

Aside from Reiss, Joe and Ainsley, the 3 most important young players at the club. Good news .

Doesn’t the contract of Willock and Nelson run out next year also? Pretty sure Willock’s does…

Interesting one with Macey. At 23 hes not exactly a youngster and needs to start playing games. Maybe a January loan so he can be considered as a replacement for Ospina in the summer?

Martinez is ahead of Macey (although his lack of playing time on loan in spain isn’t helping him).

With such a ridiculous amount of fixtures coming up over the next month or so why are we playing senior players in a dead rubber waffa cup game?

Hopefully the new British core (not just these 3 but AMN, Nelson, etc), do better than the recent set – only Ramsey is established as first team regular of those.