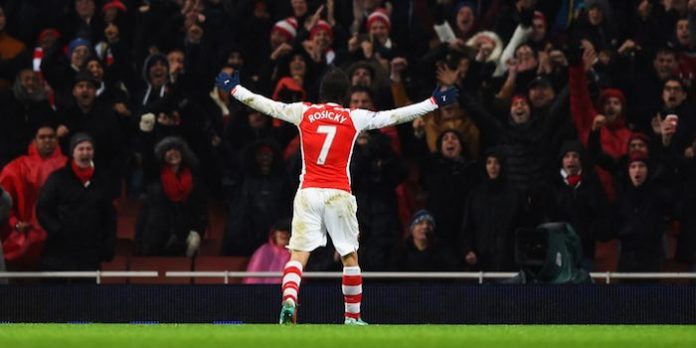 Tomas Rosicky has paid tribute to Arsenal fans on the day he retired from the game.

The 37 year old explained earlier today that he could no longer deal with the physical rigours of professional football, and had called time on his long playing career.

The former Czech international spent ten years in North London, a career sadly blighted by injuries, but he took time to say thanks to fans by calling the club and doing an interview.

“For one last time, I would like to take this opportunity to thank everyone at Arsenal Football Club,” he said.

“For me, it’s a fantastic club and it was always an honour for me to play for Arsenal.

“I always had a special bond with the fans. Every time I played, they knew that I was playing for the shirt. I always played for the shirt because it was an honour for me to represent such a great club like Arsenal.

“One thing is for sure, I’m a Gunner forever.”

Not that anyone was ever in any doubt about that. Read the full transcript of his interview here.

Rosicky on Wenger’s exit and his farewell match invite list

I think I’m going to cry. What a player and what a man.

Rosicky was a fantastic player. A real special talent who was able to take the game to the opponent, take on a man, break the lines and add a real injection of pace into the attack. He also worked his hole off, often leading the press and making sure that when we didn’t have the ball that his team mates were joining his in closing down the opponent. It’s such a shame that he had a long period of injuries whilst with the club, but he did seem to have a real passion for football and for arsenal. Loved seeing… Read more »

it was the final. He said to Giroud after the game ‘so you’re the one crossing the ball now’ (for Ramsey’s header). this was caught on the tunnel cam vid

That goal Vs spurs is my favourite. Well he scored a few against them..so I will let you imagination judge this one.

Indeed, but Second goal in the third round of the 2014 FA cup right? knicked the ball around the half way line ran through their defence and walloped it into the net?

Amongst my favorite of any Arsenal goals

BillyBatts
Reply to  my name is bob

There’s one fantastic goal side angle of that, showing him peeling away to celebrate, leaving Brad Friedel and Ledley King on the floor. They gesture at each other as if to say, “what the fuck?”

I could watch that for hours.

The way he cunted that ball into the net at Shite Hart Lane a few years ago, within the first few minutes…

All the best Mr Rosicky!

Not quite a legend because his injuries held him back but what a player that man was : loved watching him play.

Cult hero maybe? I figure a cult hero isn’t always “so bad he’s good” a la Eboue, Bendtner and the like.

oh please, he was a legend, fuck the injuries

love and miss ya aswell tom

There’s that class or player ie: Arteta, Rosicky, Mertesacker who all really seem to have appreciated player for this club. I hope we churn out a few more in the coming years

His switch from Dortmund in 2006 was actually the reason I started following the Arsenal. When he won the Bundesliga in 2002 I was just a kid, but I really liked his rather unique style of movement and passing. Until this day I have not seen a player I would compare to Tomas Rosicky. All the best, big man.

Sometimes I think I shouldn’t have favorite players. Loved this little guy, maybe even a little more than Santi.

A wonderful, wonderful player, and a true class act on and off the field. I remember the day after he signed for us, while he was playing in the 2006 World Cup, he scored a thunderbolt against the USA and the commentator said “They’re gonna love him at Arsenal!”. Truer words were never spoken.

He is an Arsenal legend, and could have been one of the greatest players ever had his career not been so blighted by injury.

All the best, Tomas, and come back and see us from time to time!

There was nothing more beautiful than watching this man in full flight. He seemed to have a better pass with the outside of his right foot than most people’s left foot. Easily my favourite player for the past decade. Deserved a testimonial

Super Tom also stated that he loved playing for Wenger and loved his version / vision of football. No mention of that Blogs?

“I always had a special bond with the fans. Every time I played, they knew that I was playing for the shirt. I always played for the shirt because it was an honour for me to represent such a great club like Arsenal.

“One thing is for sure, I’m a Gunner forever.”

What a legend. I teared up

There’s a reason I picked Rosicky for my shirt. Class is permanent.

Rosicky, I will never forget him. Never doubted his commitment to the badge

A class act, on the field and off it. I loved watching Rosicky play football.

When I read in the newspapers and in the Arsenal web site that he was going to leave the club I was really mad. He was one of the best players I’ve seen in an Arsenal shirt (a worth replacement for Pires in the #7 shirt) even at his age he was a good player to keep around but it wasn’t to be. He deserved to retire with Arsenal but it is what it is and he’ll be missed. Farewell Tomas

I remember my throat tightening after the last game of the 15/16 season watching Rosicky and Arteta’s retirement celebrations. And I usually never get sentimental like that.

Those two lads weren’t the best players we ever had, but they both understood what it was like to be us. They both gave everything they had. Hope they can come back in some form at the Arsenal one day.

Got home advantage against Chelsea but shame we didn’t get Bristol.

This guy was a pleasure to watch. I don’t ever remember a time where I thought his heart was not in it. Always played like its his last game ever. People like that are so underrated i football where they bring joy and excitement to football and not a cynical calculation and absolute caution.
Rosicky, you get my 21 Gunner Salute, Brrahh Brahh Brahh (you get the idea!!)

Gooner Hall of fame, for sure!!

He is our Little Mozart. Wishing you all the best in life, Rosicky.

I remember a game years ago when he scored against us for Sparta Prague. We had already won the game by a country mile but then this skinny little kid goes and scores an absolute cracker!!! It was the goal of the game! He just reeked of class on a football pitch even at 17 years old. He was brilliant at changing the tempo of our attack and although we didn’t see as much of him as we could have due to injury, he would always give us fans 100%. Wishing you a happy retirement Super Tom Rosicky

Class act.
When he was fit, he had the knack of scoring that extra goal even when the game was petering out.

That turn of pace. The defence splitting passing. That outside of the boot. That rocket of a right foot. And how can we forget those slide tackles.
A truly exceptional player. Hail Rosicky, he was my favourite player to watch in the flesh. Love him.

Is it OK that this wants me to cry my heart out. One of my all time favorite.

I’ll always remember Ron Atkinson (or someone similar) calling him a Rolls Royce of a player. Not wrong.

I’ve held it for quite a while, but dis time I cried. TR7, forever in our hearts.

I was at the game at the World Cup, had a clear view of Rosicky’s goal against USA, when the goal went in I was celebrating like a maniac because he was arsenal bound. Loved the way he played.

My favourite player after god

He is a Legend alright…

I am from Czech Republic and our stupid inhabitants are always making fun of Rosa when talking about him: he’s always injured yada yada yada… it always annoyed me. I thought you know nothing, being a Gooner. He is a part of a story how my relationship with Arsenal began all those years ago. He will always be remembered as a great player and he deserves nothing less… Al heil Little Moart! Thanks for the menories Tom

This guy is a good prospect for coaching, always a classy, intelligent player who embodied high-tempo pass and move.
Keep him here to get his badges, make it happen Arsene!

Tommy Gunner- good guitar player,too- maybe he’ll go on to play heavy metal versions of Mozart- a joy to see on the pitch: Wind in your sails, TR7 <3

Class. Absolute class. Once in a while a player comes along who is a master of his craft in the same way that a great virtuoso musician is a master of his/her instrument. We’ve been blessed to have several at Arsenal over the years, eg Alex James, Cliff Bastin, Denis Bergkamp, Thierry Henry and Robert Pires. Tomas Rosicky was one of those, and even if we didn’t see as much of his genius as we would have liked, what he did give us puts him up there with the best of them. Dekuju Tomas a vesele vanoce (= thanks Tomas… Read more »

Aww man! That almost brought a tear to my eye! What a legend!

Always thought highly of Tomas Rossicky a damm shame he was so cursed with injury! When he did play he was a joy to watch always looking to move us forward at pace and some of his rare goals especially against the scum will live with me forever!

He was a fantastically gifted midfielder with deft passing ability and amazing dribbling speed. Very creative.