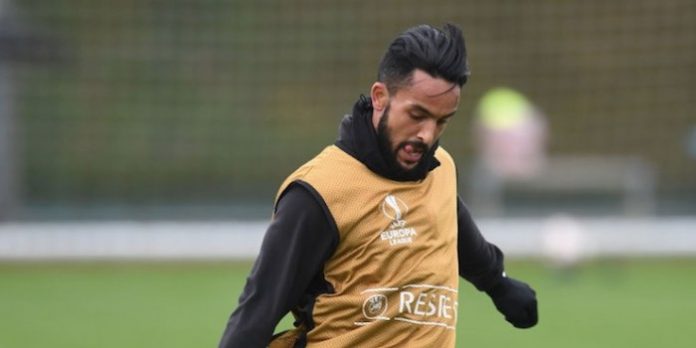 Theo Walcott scored 19 goals for Arsenal last season, but the move to a back three made him the most significant casualty of the formation change and his playing time has since plummeted.

This season he has yet to start a Premier League league, has less than 60 minutes of domestic league action to his name, and speculation is mounting that his time at the club could be coming to an end.

He’s been linked with a January move to Everton, and when asked if the 28 year old would be offered new terms with the Gunners, Arsene Wenger was somewhat guarded.

“That’s difficult for me to answer,” he said. “First of all, the player has to be happy to come to the table and and analyse his situation. I haven’t started yet.”

As for his mood and the fact he has become a bit-part player, starting only in the Europa League and Carabao Cup, the Arsenal manager admitted the former Southampton man was not happy.

“Of course he is frustrated but he is focused, I tell you,” he said. “He doesn’t give up at all and is more determined than ever.”

Whether that focus and determination is enough to see him regain a place on a regular basis is very much in doubt, but the winger is in line to start tonight against BATE Borisov in the Europa League, and it’s up to him to give Arsene Wenger something to think about.

Good to hear. Theo can make a difference with speed and goals, even if he is used more as a sub.

I don’t doubt that at all. The issue I have with Theo is his wage to contribution ratio. I don’t believe he contibutes enough to justify his wage. He is joint 4th top earner at the club, with only Ozil, Sanchez and Kolasinac earning more than him. Add to that his poor form in the Europa League and Carabao Cup. It is my opinion that either his form is in decline (maybe due to not playing enough…), or he is just happy to sit on his contract to make easy money. Either way is not good enough for the club.… Read more »

The reason why we haven’t heard a single peep out of Theo Walcott recently is simply because he knows he has a good thing going on at Arsenal, so why rock the boat? He knows he isn’t good enough to get into that Arsenal team. And he knows that he is getting paid far too much money for his services, so he sits there quietly under the radar, completely ghost recon He is on truck loads of cash, and there is literally zero pressure on him to earn it. All he has to do is turn up for training and… Read more »

Even not playing he has scored more goals than Ozil and Ramsey in the last 15 months. Whenever possible (depending on the team we are facing, Wenger shoud give him game time and play to his strength. Wenger often alks about the quality of his run and I agree. It is not only about speed, the timing and the direction he takes.

Does he have more assist or chances created?

I also think he can be effective against certain clubs but he is being paid way to much for what we know he is now.

I’d sell him in January for any transfer fee. Having his wages off the books would be significant. Our starting front 3 is Lacazette, Ozil, Sanchez. We then have Iwobi, wilshere, Giroud and Welbeck chanllenging for a spot in one of those front 3 positions, with promising youngsters like Nelson, nektieh and Akpom who can play there. I genuinely don’t see the point of keeping Walcott. Don’t hold out for a high transfer fee cuz you won’t get it, give him the opportunity to go to an Everton, Southampton or west ham and try to kick start his career. The… Read more »

Come back to the five \'n\' dime NickyB NickyB

Hope he has a good game and bags a few goals. Would like to see him given some PL minutes.

He would be far better if we went back to a 433. Personally I prefer that system over the back 3. I can’t see any real defensive improvement since we started playing it. Sure nacho, mustafi and koscielny hadn’t conceded a goal for while till the weekend, but I do remember mustafi went unbeaten for over half the season last year in a back four as well.

Wenger seems to be switching between the two systems as a plan B these days. So, I think Walcott can hope to eat the cake and have it too – stay at Arsenal and play.

I’ve joined the camp that thinks that Walcott should go. However if he stays anytime there is change in format, can a job on the right (he can even apply himself and do it better).

Is his contract up for renewal or something? Does he want a pay rise? I used to be Theo’s biggest fan (around the time he was skinning the whole Liverpool/Milan teams over the run of the pitch) but I honestly couldn’t tell you what he’s for anymore.

Somehow it always saddens me when players that I generally like are not playing as good as one would hope and are being sidelined.
Why can’t they all be top performers playing and scoring constantly?

Because we are only allowed to play 11 of them at any one time. Silly rule, I know…. and unfair because we nearly always have to play against teams of twelve. Ten outfield players, one guy in green, and one guy in black.

How wrong we were, and how right the ex-footballer was…

How right he was…

Theo has almost the same amount of goals for arsenal (107) as jack’s appearance for Arsenal in PL (108). Yet one get shat on constantly while the other got unlimited free pass.

Some Arsenal fans have a tendency to focus on what a player isn’t and let it flaw their perception: Giroud has no pace Xhaka can’t defend for his life Ozil seemingly lacking fight like Scott Parker, Jordan Henderson Mertesecker has no pace Ramsey has no sense of positioning Wilshere doesn’t score goals Walcott has no technique, etc …the list goes on. It’s oh so easy to have a myopic view of a player and deride them when things go wrong *cough*Sky pundits*. We as fans, need to get behind the team and appreciate each player for what they are and… Read more »

Well said mate. All players have strengths and weakness. I’ve seen Messi pushed off the ball many times, but nobody will argue that he’s not the best player in the world right now. Despite walcotts limitations you cannot argue that when his finishing is fine tuned he can get you goals. Unfortunately, his limitations cause us to lose our guile in our build-up and overall style of play. I think wenger wasn’t wrong when he picked him up from southhampton. there was something there, sadly, perhaps to set-backs throughout his career he lost important time where he could have used… Read more »

He’s had 10 years to “fine tune” his finishing to be fair.

I don’t know if finishing is something that is linear or something you constantly have or don’t have. Yeah some players have better natural finishing ability like Laca or Zlatan. No doubt about that. But using the guitar as an analogy, if you left that guitar on the rack and never played it for a while, the strings are going to loosen and not sound as good. While Laca and Zlatan maybe like a premium guitar, I’m sure Theo is not some Tesco offbrand that you get for your 12 year old kid who’s going through his alt-phase. Even if… Read more »

For me atleast, my main issue with walcott is the very marginal improvement he has made since he basically joined us along with parts of his game which he chooses not to utilize more often than not. Like off the ball positioning, pressing teams with pace. He was doing all these right before getting injured vs spurs a few years ago. I’ve never seen those aspects of his game ever since he covered from the injury

He still possess those skills. But we do not play to his strength. Whenever he run to a good position, he hardly receive passes from his team mates unlike when Cazorla was fit. We have been complaining that Lacazette is not getting enough service. Walcott and Lacazette are similar in positioning, scoring instinct, and off-the-ball-run. Why can’t we make the same excuse we make for Lacassete also for Walcott?

This is a fair point; however is it possible that the issues being highlighted are based upon the additional demands required of elite players to be well rounded and consistent? The game is generally less tolerant of ‘goldilocks’ (which we seem to be overstocked with) players and requires input both offensively and defensively. In addition, once you play for a ‘big club’ in elite competitions and demand the wages to go with it, the output and effort of a player is expected to correlate with the mantle/privilege. Performances are also constantly analysed. Consistency is the ultimate goal at this level.… Read more »

All good points to be fair. The truth is though that the players you mention are afforded a lot more space as the defences they play against are far less packed than they are against us. I don’t think lack of effort is the issue with Walcott. More a lack of confidence.

Perhaps some of it is also lack of ability; how many times are supporters left frustrated as he runs headlong into a defender or leaves the ball behind while attempting to dribble? The lack of execution to make the right decision in a competitive arena (the infamous ‘football IQ’); simple passes awry, repeatedly caught offside while being able to see the entire defensive line. The inability to make ‘significant moments’ in a game either offensively or defensively and simply hiding; appearances where he doesn’t touch the ball. I don’t know if you watched yesterdays game, but Theo Walcott was brilliant.… Read more »

Would there have been more of a chance of him becoming more technical and defensive workrate had his demands to become a striker and bigger wages not got in the way?

Some players have held this club to ransom, and it isn’t the fault of the players or manager. Good thing we have someone new in the club now for contracts and another who has enough european contacts to stop players believing they are irreplaceable.

Focus and determined to stand by his juicy wages

Theo personifies the current team in many ways. He can be absolutely devastating or totally insipid. It’s just a matter of which Theo turns up.

Question: In todays market. How much do you think Walcott is worth (£)?

I would say £30m, his scoring record is pretty decent. When you think Mitroglou went to Marseille for €30m…

Personally I’d pay BATE Borisov’s bus driver a couple hundred quid to take him back to Belarus with him after tonight’s match.

get rid for heavens sake
wheelchair with him
dubuachy,coqulain,ospina and sanchez with um
and by some miracle recoup our money for xhaka and get a proper defencive mid in there
sign up ozil…
lets see if these new directors of operations and what not are any good or will it just b the same old bumbling we are used too

You think about as well as you spell.