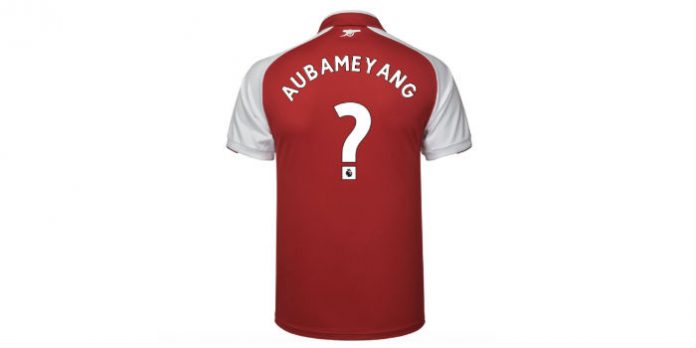 Arsenal have confirmed that club-record signing Pierre-Emerick Aubameyang will wear the number 14 shirt for the Gunners.

The Gabon international inherits the digits from Theo Walcott. The number was, of course, made famous by club record scorer Thierry Henry.

Aubameyang wore the number 17 at Borussia Dortmund, currently sported by Alex Iwobi at the Emirates.

As he’s cup tied for the Europa League Pierre won’t be getting a second number like Henrikh Mkhitaryan.

The Armenian was given Alexis’ number 7 shirt for the Premier League only to learn that UEFA rules stipulate: “No number may be used by more than one player on a team and no player may use more than one number in the course of a season.”

A rare example of Arseblog click bait. It worked.

That’s right. The key to master baiting is to keep it secret.

Unless you’re a Hollywood producer

So glad they got the deal done

I should be excited by this (the signing) but yesterday’s performance and Giroud leaving has fucked it all up.

Not going to happen. You’re dreaming.

how did that work out?

Jesus! If there was an article here on our 28-0 stuffing of ManUre, during which Mourinho died of the clap, you’d find something to fucking winge about in it.

Glass half empty is it?

Lack of Perspective
Reply to  TeeCee

Sant doesn’t want much. He just wants us to go back in and buy Mahrez for 50 million pounds, and won’t be happy until we do so (all while he completely ignores the fact that bloody Man City couldn’t buy him at bloody 65 million pounds)…

Yeah, come on Santori, chin up mate. At least stuff happened. Hopefully it all works out, but if you dont try something things stay the same.
You need to cheer up a bit mate

Lacazette is world class, and if you expected him to be pacy just because he is black then God help you

Let’s not use the catchphrase of that tiny handed, nut job either, please.

Congratulations. You have won today’s internet!

priorities in the summer? Keeper, dm, cb and winger?

Coz either we stick with Cech, Xhaka, Mustafi and Iwobi or ship one/two of them out and strengthen. We really can’t get rid of them all(although we have been particularly ruthless this january so who knows..)

But we really need to address Xhaka’s short comings, as well as Mustafi’s.

I pray this is the summer we actually build a complete team.

Looking forward to watching auba and Mikhi play together.

Lack of Perspective
Reply to  GeorgeTheNairobiGunner

Whats with all the iwobi hate. I get he isnt exactly flying but fuck me its not like hes scoring own goals or liable for our immense fuck ups.

He was awesome before this season, and is now trying to add to his game. Which maybe causing him a bit of imbalance. Hes clearly working hard.

He will come good. Be patient.

GeorgeTheNairobiGunner
Reply to  Lack of Perspective

Iwobi could probably benefit from a bit less pressure. Hence why I listed winger as a priority area. I love the kid, but I am not sure throwing him on game after game with the performances he has been giving is doing us anyone any good.

Not hating Iwobi. He is class among the players at his age but is not our immediate solution at this moment. The arrival of Mkhi and Auba will definitely be at the expense of Iwobi. He is for the future & have a lot of time to learn from them & Ozil.

Xhaka has excellent long range distribution but he worries me. A lot. We should go in for Javier Martinez from Bayern (if they agree to sell) and let Xhaka go. We need a couple of center backs to replace the aging BFG and inconsistent Mustafi. I hope Mavopranos can do that. At least Debuchy is gone and I bet for Welbeck come next summer…. Cech could be past his best but I believe he still has a couple of more seasons in him. The defense really let him down and put him under a lot of unnecessary pressure. But we… Read more »

Return of the Vavavoom

PEA’s wikipedia’s page has been updated with the number 14 three hours ago..

Hope he hits the ground running, given we just said goodbye to our three most prolific forwards.

It’s asking a lot to replace all that end product in his first season. It’ll be interesting to see how Wenger plays him, perhaps combining with Laca in a two up front…

Exactly what I was thinking. Except auba on the left so it’ll be easier for him to cut in and shoot. Definitely wilshere and elneny (for now) in the midfield. Elneny may not be flashy but that’s not what we need. We just need someone with enough quality to find teammates but more importantly we need him to act as the “policeman” and he always makes himself as an available option keeping the ball moving. Wilshere will take the role of santi to link up with the forwards with his quick one touch passing. We saw how Ramsey and xhaka… Read more »

With no disrespect to Theo..the number 14 has finally found a proper replacement.

Aubameyang is no Henry.

There has been no replacement for the invention, guile an pace Henry gave us on the apex.

OMG no one is saying he is the next Henry

Give it a rest. You have no idea what you are talking about.

Are we suppose to not use certain numbers anymore for players?

Youre right Santori, Aubameyang is no Henry, he is in fact Aubameyang.
Get off your downer mate

No disrespect to Theo who scored twice tonight for Everton! Hope he doesn’t turn us inside out like he did as a kid for Saints youth team.

Underwhelming. 1) Nothing done to solve midfield this January which is real probelm area for both attack and defense. Instead we sell Coquelin. 2) We release a great asset who is not cup tied in GIroud and replace with one (for a lot of money) that really replicates what we already have with ‘world class’ Lacazette…did I mention new player is also cup tied for the europa but we’ll probably now end up limiting Lacazette’s time further and hope he stays sharp somehow for europa games…oh wellthere is always yet another UNited reject with bags of pace…Danny Welbeck plan C.… Read more »

WTF does this have to do with the original post. Do you have to copy and paste everything in every post?

So let me guess: you want to buy Mahrez for 50 million pounds?

Is that your great strategy?

Psst: Man City was way ahead of you. Offered more than your fabled 50 million pounds, even. Wanna guess how that turned out?

OZIL is staying on 350k a week … With one or two more signings we can win the league …. cup. As long as Addemupandbangemin is firing. And the Epl league next season. so cheer up mate.

Why is he cup tied for the Europa League, as he only played in UCL?

Dortmund were knocked out in the group stage and bumped down to Europa. The rule stipulates if the club he’s left is in the same competition as the club he goes to he’s not eligible at the new club.

We are so lacking in creativity and technical ability out wide. We will be so easily funneled into the middle yet again. Plus we now lack pace out wide and are reliant on the fullbacks to come forward (with potential implications to what goes on behind them) No one available that can BOTHscore goals and create? Give us better balance than yet another striker and ex-Dortmund player? No Mahrez to City apparently. Spurs signed Lucas Moura for only 25m. Better deal. More balanced player. Creative out wide with a bit of pace. Apparently Nasri is still available for free….still only… Read more »

When we start to transition from def to attack, that’s when it all goes downhill. Our CB passes to either midfield or fullback and they immediately pass it back to our CB when someone goes to press them. Compare that with Swansea even, their players would at least attempt to beat our player pressing and then play a forward pass. Ramsey and xhaka seem absolutely terrified of either beating the press or passing forward quickly, they hardly do one touch passing. And they don’t offer as a passing option to our fullbacks so our fullbacks are also forced to pass… Read more »

precisely. therefore when our CB passes to the full backs, we need 2 players – 1 CM and 1 AM to give the FB 2 outlets to pass forward to. if bellerin gets the ball from kos, i want to see jack/ ram, and ozil/ micky in space to provide 2 options for him to pass forward to them, and then when one of them gets the ball, another CM or AM comes into to form another 2 outlets.
it’s all about off the ball movement. sadly we no longer do that.

Mentioning the chinless wonder that is Nasri just spoiled it for me.

The last two guys to wear that shirt scored 330 goals or something so he needs to get at least half that.

I don’t know how strong Aubameyang is with hold up play but Lacazette has been weak. As I have mentioned all along, there is a reason why Deschamp preferred Giroud over him for France. What we lack when pressed in midfield is an outlet from the back. Ordinarily, Jack is the only player who gives us an outlet for the defense and when he plays, our Cbacks/fullbacks are assured. But when he doesn’t (you have Ramsey , Elneny, Granit none of whom can turn), the ball comes straight back into defense when passed out and the defense is then culpable… Read more »

OMG you cant’ be serious about this?

So you would have paid nearly 100 million pounds for Mahrez (because let’s face it Sant, your fabled 50 million pound valuation was short of what City offered in a FAILED effort to get Mahrez, with Leicester holding solid at their 95 million pound minimum price) to, as you put it, “reinforce better” ?

I doubt replacing Alexis with Mahrez would leave us any better off than we are now. And we’d have spent more money for the priviledge.

How do you sleep at night? If glum Conte had signed PEA and Hm and kept Ozil he wd be lauded as a transfer genius. U need to take the week off. It’s only two goal Feo and Shrek this weekend.

Time for Dat Guy to step up in the Europa League.

Agreed, actually think playing 2 up front would suit him better as well.