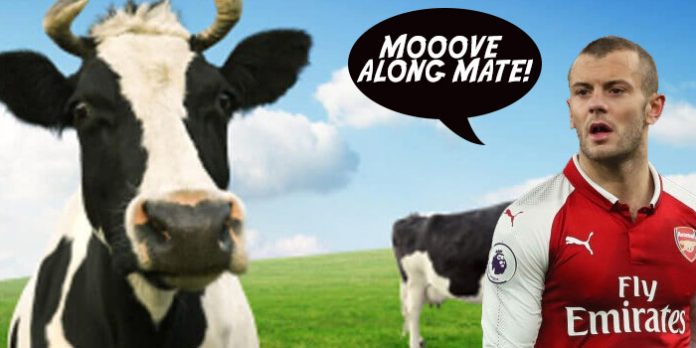 Jack Wilshere says that cutting out dairy and eating a gluten free diet has made him sharper and leaner over the last few weeks.

On a fresian cold night at the Emirates, the midfielder’s prowess was on display with a fine performance and a cracking goal which put the Gunners 1-0 up against Chelsea, in a game which finished 2-2.

Speaking to Standard Sport afterwards, the 25 year old was bullish, crediting a change in his diet for making him as potent as he is in an Arsenal jersey.

“I didn’t have much dairy but the few times I did in the team hotel, I had an upset stomach. So I have just cut it out completely.

“I feel that I look better, I have certainly lost a bit of weight, and am leaner.

“I am probably fitter as well. I know my body well, I know the right foods to eat and the best way to recover.

“I’m also getting the right amount of sleep. I’ve learned that over the years, and I think I’m in the best shape I have ever been.”

The 25 year has been the cream of the midfield crop in recent weeks, his goal was udderly sensational, and such is his form that many fans wish he could sign a new deal and stay for heifer.

Ok, it got less subtle as it went on, but hey.

A bit too corny?

He cut out gluten but his diverticulitis is still playing up, going by last night.

Ugh, I could claim I’m just chewing the cud, but I need to be put out to pasteur for that one.

Christ, this is what I do with my lunch break.

You’re a gluten for punishment

Milking that story blogs, how dairy you!

Having a hay day with moosic.

He’ll have Gareth Southgate chewing the cud over his squad selection now as well. Jack would be pretty cheesed off not to be on the plane.

I think he is glued-on to be re-signed.

Perhaps you meant, “but hay?”

I cow enjoyed this. Milk

I can’t udderstand why the club havent jumped at the chance to offer him a contract.

Unbullievable, but he has the ryet attitude so keep at it Jack!

Mourinho is a cow’s sphincter. I know that wasn’t subtle, but it needed to be said

And everything he says is bullshit.

Hope he doesn’t get hoofed again

A mighty bovine performance from the young man.

Yep, give that man a pat on the back

Having been farmed out on loan, he has come back with raking passes and skipping fowls.
Would love to see him partnered with Santi Cowzorla in the middle of the field.

You could have put more thought into those puns, blogs. Seems like you knocked up this article on the hoof.

Jack is 26 but hay, who’s cownting? (apologies for the improvisation)

“My kids have always been dairy and gluten free since birth.

Why have they been? Weird.

Not really. The vast majority of people are at some level lactose intolerant, even if they don’t display the known symptoms, there is an internal effect. Cows milk, even though we’ve been brainwashed into being told it’s normal human consumption, really isn’t. Just another product of President Reagan’s legacy of peak capitalism and deregulation of the markets (followed fondly by Thatcher) allowing the corporate food industry to market milk as normal for human consumption and great source for calcium (note: milk is extremely acidic and ironically enough requires calcium from your bones to help neutralise it) due to the huge… Read more »

Dairy products are acidic as they are digested, some things that aren’t acidic as food become acidic in the gut.

And you don’t want your gut acidic? How else you digest food.

There’s a balance. Current Western diet is too high in acidic foods and little in alkaline.

this is an entirely bizarre forum for this, but genuinely, what’s wrong with soy? I switched to soy about half a year back and I quite enjoy it!

I really hope he’s keeping his kids gluten and dairy free since birth due to medical reasons such as celiac and lactose intolerance.
If not, then WHAT THE ACTUAL HECK!!! Where is his Pediatrician? Gluten free in particular is not something you should be doing without a medical reason for it. ESPECIALLY for kids!!! Our ancestors have been eating gluten products since the history of man probably. Unless you have a medical issue with gluten, you should not be eliminating gluten products from your diet.

Feel like there might be other forums better suited to discussing how parents should raise their children.

Knowing people with Celiac Disease, the real problem with people choosing to be gluten-free as a fad diet is that different places, especially restaurants, advertise products as “gluten-free” when they still contain a certain amount or do not control things like cross-contamination that can make people with actual allergy/disease quite sick.

Humans also used to die of old age in their 30s.

And cut the nicotine,too, Bro.

The way he’s playing now makes me even sadder about all the injury years. But i suppose there’s no point crying over spilt milk.

Can’t wheat for him to sign that new contract.

It did indeed get less subtle as it went on. But, hay! I got no beef with that.

“I’m also getting the right amount of sleep.”

there is research that suggets milk leads to osteoperosis in later life. that meat can cause diabetes and gluten is terrible for you. an i mean actual peer reviewed research.

seems to be aside from cucumber and water every we eat kills us.

Jack has been udder the weather for far too long. Hopes he doesn’t move for pasteurs anew next season