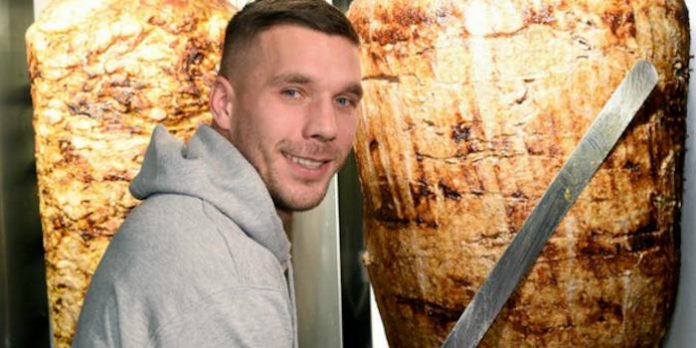 Lukas Podolski has expanded his burgeoning commercial empire in his hometown of Cologne by opening a kebab restaurant called Mangal Döner.

Poldi, who left Arsenal in 2015, plays his football in Japan these days for Vissel Kobe but made the trip back to Cologne to greet and serve fans on the restaurant’s opening night. He also posed for photographs cutting a massive stump of doner meat. As you do.

Speaking to Kölner Stadt-Anzeiger newspaper, he explained, “Ideas just come — I don’t even really have a business plan right now.”

He added: “Opening a five-star restaurant isn’t my style — I’m not the type that wears a suit.”

Arseblog News wasn’t invited to the opening, but we’ve had a tip-off that the restaurant’s playlist is unique, with hits, stars and styles on the jukebox that include:

Please feel free to add your own in the comments below.

I don’t think it’s deliberate! But it would be nice if Arseblog brings us more news about Eboue so we can reminisce. Also, on the off-chance that he reads this blog, maybe Eboue will know how loved he is

I shish it could be Christmas every day

Shish you were here

Turkish you a merry Christmas

The grill is gone

Shishter Sledge are making an appearance i believe

I remember when i tought he wasnt good enough for arsenal. Come back, i beg you!!!

Attacking positions aren’t our problem… If wenger would sign me back I’d improve our defense.

house sauce of the rising sun

The meat goes on…All seeing i

Been there Doner that

Top distraction strategy this, lets forget about football, play this game all day and make it the most commented news post ever on Arseblog ??

good luck to him. I fucking love kebabs.

Skewers in the Night

Doner blame it on the sunshine

Blame it on the Lasagne?

Any songs from Shar War Ma?

Kebabs The Way I Like It – KC and the Sunshish Band

I had to check the date to see if it is not April 1st. Then I clicked on the link expected to be rickrolled.

You Spin Me Right Round….

What shish love baby doner hurt me no more

By the rivers of kebabylon.

Hommust’ve been love but it’s over now

His kebab shop and ice cream parlour have just made it to my food bucket list. I’m a vegetarian living in USA but I just have to do it.

anything by the humus league…

Hallou. Is is mi your looking for?

Poldi always makes me smile, I miss him at Arsenal.

One for the oldies…”save all your shishes for me” Brotherhood of Man.

Surely this on a loop
. One of if not the best bootleg from the epic year in breaks 2003. The intro is a bit long. But worth the wait. https://www.youtube.com/watch?v=RUVu82Sb9x4