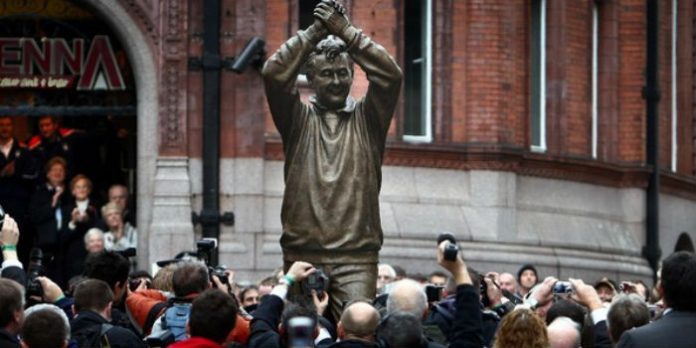 Arsene Wenger says he regarded former Brian Clough as a manager ‘from another planet’ when he was making his formative steps in the game.

While the Frenchman never came face to face with the legendary coach in a competitive environment, he did meet the two-time European Cup winner, who managed Nottingham Forest for 18 years between 1975-1993, on a couple of occasions.

Ahead of Arsenal’s 3rd round FA Cup clash with Forest at the City Ground, Wenger took stock of his encounters with Clough.

“We didn’t speak a lot after the game because he was already fatigued,” he recalled.

“He was very lean and you could see he was no longer at full power. But of course I had huge respect for him.

“When I was young I looked at the big managers who were successful. For me then, he was a guy on another planet.

“Today everything is available, but at the time you had to look for information. I used to travel in my car at night to watch managers work and watch their training and then come back home in the next morning.

“It’s different now because you have the internet and every exercise from every single club is available. At the time you had to fight for your information, now you have too much.

“I believe that above his achievement is his personality. He’s a special person in English football.

“It’s his personality that has left a huge imprint on the history of the game. So he will be remembered as one of the greatest ever, among three or four greatest in English football.”

Before Clough died in September 2004 he witnessed an Arsene Wenger side beat the unbeaten record set by his own Forest side in the late seventies. A notoriously tough personality to impress, Clough had the following to say to the BBC about the Frenchman’s ‘Invincibles’.

“They are nothing short of incredible. I’m loath to confess to you that they could have been nearly as good as us (Nottingham Forest, who went unbeaten for 42 games between 1977-78), but they are brilliant. And I mean brilliant.

“Their expertise and their talent and their all-round ability…the thing that fascinates me about them and I’ve seen them a couple of times in the last couple of seasons, is the way they treat the football, you know?

“I used to preach when I was in management, ‘What did you kick that ball away for? It’s your friend. It’s the only friend you’ve got.’

“They treat it like it’s their long, lost friend. In fact, they are that good, I think they like the football, the ball, the actual ball they play with, better than their wives.”

In a separate interview, he admitted: “They are brilliant. It sticks in the craw a little bit because nobody likes Arsenal!

“Of course there’s a Frenchman in charge, Wenger, and not many English people like Frenchmen. He is a top, top manager.”

“They are nothing short of incredible. I’m loath to confess to you that they could have been nearly as good as us….” Sums Clough up to a “t”! Legend- to have formed a side that won a League title, and 2 Euro cups on the smell of an oily rag…words fail.

Brian Clough: “I wouldn’t say I was the best manager in the business. But I was in the top one”.

I thought Mourinho said that then I remember he didn’t have the intellect to coin it this way.

A great man, a great manager and a pleasure to watch those teams he managed. And the compliments of the invincibles is as gracious as it gets from the great Cloughie. Hopefully. AW won’t have to be gracious towards Man City.

Do you think Man City will break our record ? No chance, they won’t pass january unbeaten.

I’m afraid they have every chance but I desperately hope they don’t.
There can only be one ‘invincibles’…

Clough and Wenger transcend the sport. In fifty years we’ll still be talking about both.

They both were magical at their best. But both hung around for far too long after their best days were over, and ended up hurting the clubs to which they had brought so much glory.

Clough was the better manager because he had the superior tactical nous. That’s why he won two European Cups. Wenger has more flair but was, and still is, weak tactically – that’s why he never won a European trophy.

During that CL final, Henry kept on going to talk to Wenger on sideline about the tactics. Wenger only has tactics for FA cup finals.

No greater testimony could you conceive for Wenger’s vision of football. Look at what he says and see how much it resonates with our manager’s more relaxed interviews about the game.

I needed comfirmation on this, but could never get any until now. “It sticks in the craw a little bit because nobody likes Arsenal! “Of course there’s a Frenchman in charge, Wenger, and not many English people like Frenchmen.” Do these statements still resonate with English people? Because from the outside looking in, its hard not to catch the hatred for Arsenal. It is sometimes subtle but everyone I know has noticed it. I cant even watch Arsenal games with English commentary. Am I onto something here or is it just my Arsenal bias convincing me that most negative statements… Read more »

theres a great article in the latest gooner delvin on this very subject,it says that the media in general,seem to have their favourites,and that it keeps changing,right now its pep and pochettino,but if pochettino doesnt win anything (lets hope he wins nothing with that shower) in the next year or so,then the honeymoon will be over for him too........... adrian durham obviously hates us,but lets be honest,no-one takes talksport seriously................as for clough,i wish he managed us in his prime,fantastic character,i dont know anyone who doesnt love the man.

“I cant even watch Arsenal games with English commentary. Am I onto something here or is it just my Arsenal bias convincing me that most negative statements about us come hatred of our club?” It has nothing to do with your Arsenal bias. I speak Spanish and Italian, and when I stream football matches, I almost always choose one in one of these languages. The commentary (especially the Italian one) is consistently balanced and very insightful – it actually makes a game a pleasure to watch. The English commentary is unbearable. If we’re playing a team X that’s out of… Read more »

No. You’re not imagining it.

In clough’s time we were disliked for being a boring, uninspiring ‘1-0 to the arsenal’ team etc. Spurs were media darlings then, chaz n Dave, Villa and Ardiles, Hoddle, Waddle, full of glamour despite never getting close to being league winners. Man Utd;, Liverpool;, Everton; all of those were more fashionable teams than us during Cloughie’s era.

Wenger changed that with his Arsenal revolution in the way we play.but Clough still saw us in the old way, and I think that dislike has stuck with many growing up or playing in that generation.

I can see what your line is, but in the late 70s Arsenal had a team that went to 3 FA cups and a Fairs cup final in 80. Brady, my fave, Rix, both were no slouches when it came to skill. Plenty of grit too. I seem to remember 3 FA cup semi final replays against a Liverpool side that was transitioning from one great side as it aged, to another. That negative impression might be (OK, no might be….) associated with the early 80s sides that looked like a rudderless ship as Brady, Stapleton etc left.

The last line about English attitudes toward the French is very telling. There is an underlying resentment in England about Arsenal being a French club that goes a long way toward explaining the disrespect shown by the media and referees over the last 20 years.

As a supporter of 50 years and my dad and grandad before that. I can assure you that we have been consistently hated by the media and the rest of the footballing public since the 1930s, no matter who the manager or players were, or the style of play.

How far we’ve fallen since the invincibles.

The rest of the league has caught up technically where Wenger has revereted to some sort of little Britain project.

He hasn’t caught up with the spending of the top 6 either.

BUT he won’t buy to cover his flaws tactically.

And we are slipping in quality.

Living in the past.

We are so far away from the sort of qualitative dominance we had during that period.

BUT he refuses to add sufficient quality (proven) into the squad.

Meanwhile rest of the league have shed their allergy to foreign players and been injected with TV money. Top 4 has become top6 with more spending power.

And we are buying mediocre players like Elneny, relying on technically deficient players like Welbeck and Walcott…the Little Britain project.

I won’t be surprise if our invincibles legacy gets tarnished by City this season.

We won’t be stopping them at this rate.