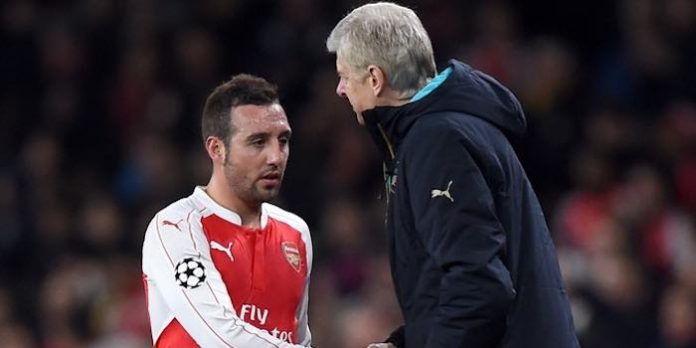 Arsene Wenger says Arsenal could offer Santi Cazorla a new contract if the Spain international can prove he’s capable of handling the physicality of top-level football.

Earlier this week the midfielder, who has not played for Arsenal since October 2016, revealed he’s hoping to return to fitness before the end of the season. However, with his current contract at the Emirates due to end in the summer, it doesn’t leave him with much time to prove he’s worthy of an extension.

“The latest news is he had a new surgery and we’ll see where we go from there,” Wenger told press on Friday.

“I’m not informed well enough about his medical situation. I sent him a message two weeks ago wishing him well but he has not come back yet as he’d just had surgery.

Asked whether he’d be prepared to offer Cazorla a new deal, Wenger, unsurprisingly, refused to rule out the possibility.

“That depends on his medical availability at the top level, we have to assess that before the end of the season. If Santi Cazorla is fit and capable to play, yes. If he’s not, then we’ll have to see.

“It’s a complicated situation. We love him. Secondly, he’s a great football player. The third situation, you need to be healthy today to play at the intensity level that is requested in the Premier League so we have to see if he can absorb that or not.”

Arsene, treat your legend with respect once again. Offer him a contract with lower base pay, but with bonuses for participation in games. That way he can be calm about his future and focus on his recovery.

There’s no point offering anything if he cannot be competitive.

If Santi can compete at PL level then yes. If not, no contract even if he is a legend.

In times like these we should remember Kim kallstorm. Scored a brilliant penalty to help us end the trophy drought.
I believe Santi can do that aswell. Let’s hope it’s in the CL final next season. That’d be very Arsenal.

I love Santi with all my heart, but I don’t think we should offer him a new contract yet. Keep him around, help as much as possible, let him use our facilities for his recovery, keep him around the rest of the team and then give him a new contract once he’s fit. Regardless of how it happens, if I ever see Santi in arsenal shirt again, I think I might cry with joy. I will never forget his FA cup final goal, nor his perfect performance v city, but weirdly the one memory that really stands out is him… Read more »

I agree. And I for one am thankful that Wenger is the venerable boss in this particular predicament involving our Santi Clauzorla. Imagine if a deranged jezebel like that Maureen was or some other sychophant was the manager of our Arse Club now….. *shivers*

I suspect this might be the case, and we’ll probably see more of this going forward given the Premier League’s ‘cost control measures’. I’m sure the legal team can hide bonuses outside of the salary figures

Well, we do need a new, continually injured captain for next year’s squad to carry on that unique Arsenal tradition.

No..not Santi.. Please don’t make fun of him. He is undoubtedly one of the best things happened to Arsenal in past 4-5 years.

A player nobody can hate. Fuck I miss him in midfield!!

We love him too Arsene.
I imagine most fans would support a year long extension, reduced wage with big bonuses for playing. His situation really is heartbreaking.

I don’t believe it , what is this man playing at

He’s doing it specifically to annoy you.

Not optimistic, would be great if he can come back to near the level he was before. But he’s older, has had a long time out and the injury and surgery were so damaging that it’s not likely.

But will keep hoping.

Not unlike Tomas Rosicky, in how the club is showing faith. Even if the return was not equivalent to the time and investment– there were flashes on the return. Like his maestro goal on the break vs Tottenham in the FA Cup in 2014, sealing the 2-0 win.

I guess the difference is Tomas never managed to become integral to the first XI because he always got injured while developing momentum.. Santi on the other hand pretty much kept us at a competitive level on his own before we signed Ozil & Alexis. I rate signing Cazorla was the most important addition we’ve had in the post-Invincible era.

Good points.
Still, here we are. Still believe Santi is worth the cash.
If there’s a chance to benefit on-pitch from his presence in– whatever competitions? It’s not a lot of risk in the grand scheme financially.

It’s a good thing to hear about Santi let the club decide wisely and bring him back to the squad as soon as possible he is a very good player I love him very much.

Santi on the other hand pretty much kept us at a competitive level on his own before we signed Ozil & Alexis. I don’t disagree with you Tim (thumbs up), but just wanted to point out that Cazorla has only been an Arsenal player for one more season than Ozil. It was a wonderful season for him mind you – ever present in the Premier League and 12 goals. I’m a big Santi fan like everyone else is. He plays the game with the right attitude and is technically very composed. Even if he can’t resurrect his career I’d love… Read more »

It’s not YOUR money Wenger. Cazorla will never play at the top level again and it’s ridiculous to imagine he will. Arsenal is not a charity.

Clearly everyone, most of all Wenger, understands that, but he’s hardly going to say ‘No contract, he’s finished’ in a fucking press conference, is he?

how about in a non-fucking press conference?

No such thing. By definition it’s going to be full of fucking press.

If it were Maureen, all bets are off. That cunt will probably transfer list players in press conferences in the near future

No, but it’s the sort of thing he’d do. He kept giving contracts to that other charity case, Diaby. Never has a footballer been made so wealthy for doing so little. And before you say it, Diaby had chronic injury problems before he even joined Arsenal.

The fact its not his money is more reason to use it in my book! We need to squeeze as much as we deserve out of the board. Waiting for this stockpile of money to be invested over here like zzzz. I am optimistic though! not long left…

If you read Wenger’s response, that is what he is saying. Contract renewal is dependent on fitness. He even gave a deadline for this to be met. What’s the problem? The alternative would presumably for Wenger to light up at the press conference, put his feet on the table and say “Cazorla? He’s finished. No football, no pay”.

I really hate it when fans bang on about about it noting being ‘your’ money. Do they even know how a football club is run?

I say give Santi a massive 20 year contract. Also, a clause to help several charities, like the Clueless-Ungrateful-Nonsensical-Twit (CUNT) fund.

Oh, and a press conference announcing the new contract to which Pete is the guest of honour.

This means one thing: Arsene will be here next season! He can’t possibly offer Santi a new contract from Strasbourg. Can he?

2 weeks and no reply. Rude fucker

Like a new signing (if that signing is Abou Diaby).

This has been an issue for 3 seasons now. Once the injury is diagnosed as potential chronic and given the player’s age (wear and tear), we should have got in an adequete replacement. Granit shows promise in certain aspects but only delivers half Santi’s capability. IF Mhkitaryan can shift into deep midfield (eventually) to perform an Arteta role, maybe we have better balance. Wenger has had great success converting more experienced offensive players in recent years into the tranquista role. First it was Arteta (nominally playmaker with Everton) then Santi (a wide player). I expect this may be his thinking… Read more »

Forget what we should have done or what we could now do, the question is whether Santi should get new contract.

Much as I love Santi and his being the only two-footed player we’ve had for years, his return after these operations will only see more injury problems in other parts of his body. This will see continued layoffs with hamstring and other muscle strains.

I think a week to week contract is the only way forward.

A week to week contract? We can’t even negotiate or sort out contracts that are several years long! Everyone associated with AFC would end up losing their minds…well, what’s left of our minds 🙂

Why have we still not signed Aubameyang?

Relates to Santi how?

This is one of our sader stories, such a shame he doesnt get to embaress opponents week in and week out

Sad, i think he was our best player for several years and one of the best deep-lying playmakers in the world. The whispers of Henmick actually being Santi’s replacement are intriguing.

If Cazorla does have to retire, I hope he’s offered a coaching role; he would have a great deal of knowledge to impart on younger players and is a great person to have around the club.

a reasonable weekly with generous games played incentives at the least. if only because he learned to be a two footed wizard by taking a hundred kicks with each foot against a wall when he was a boy. let all the new lads chew on that. and that smile.

…against a wall every day…

His story is heartbreaking but the guy not able to play and never will. We all know that.
Lets give him a job as an ambassador or scout but not as player.

I love Santi, he is by far the player I am fond of the most in the current Arsenal, but we have to say it – He’s never going to player football at a ‘top level’. Don’t let him turn into another Diaby – Thank him for his contribution to the club or even keep him in the club after he’s retiring, just don’t get way too optimistic thinking he might be a part of our squad ever again.

being honest .. its a poor manager that doesn’t know the condition of one of his top players

Really gutted, one of our best players by far. The team hasn’t been the same without him. I hope Wenger does offer him another contract, shows a good level of respect from the manager. Far better to look after him than throw him on the scrap heap. He may never play again but at least the club has given him a good duty of care with the medical treatment and possible contract extension. I wonder if he’d do his coaching badges? Might be a good person to have around in the long run I really hope we get to see… Read more »