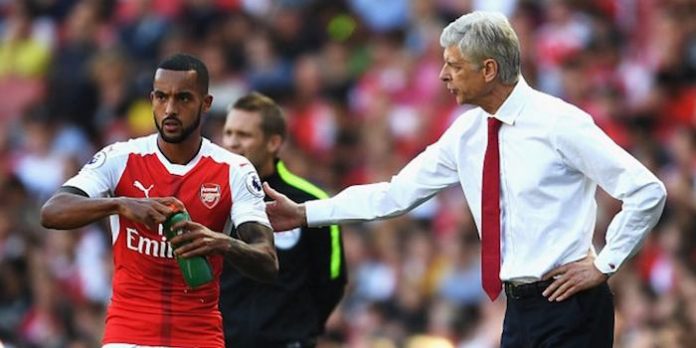 Arsene Wenger has paid tribute to Theo Walcott after selling the striker to Everton and says the player will always be welcomed back at the Emirates.

The Frenchman signed Walcott from Southampton as a 16-year-old in January 2006 and struck up a strong bond with the player as he progressed from boy to man at London Colney, became an England international and scored a century of goals for the Gunners.

Asked what his residing memories will be of the England international, Wenger reflected on Friday: “I would say that my memories of Theo go for over 12 years.

“Personally, I’m very, very attached to Theo because he’s a person who is intelligent, has complete integrity and total commitment and focus on his job.

“I remember, he arrived here at the age of 16 and went to the World Cup straightaway. Of course, he scored important goals in big games, we can speak about cup finals [versus Chelsea and Aston Villa], Champions League games or the local derbies. He’s made outstanding performances against Tottenham.

“I just regret what happened, but he didn’t play enough recently and I wish him well and thank him for everything he’s done for us. He’ll always be welcome here.”

For his part, Walcott thanked fans for the support during his 12 years at the club.

“I would like to say a big thank you to everyone involved at Arsenal, manager, coaches, backroom staff, and all the many people at the club that have been part of my family for the past 12 years,” he said

“I would also like to thank all my team mates I have had the pleasure of playing alongside, but most importantly the fans for their incredible support.

“I feel sad to leave but also excited for a new challenge. I wish everyone at the club every success for the future.”

Will be interesting to see how he does with a consistent run of games and less pressure.

Probably absolutely nothing… as per usual?

Yeah, over 12 years?! I’m sorry but he should have left about 4 years ago, his career’s stagnated badly yet he was happy to sit and pick up a wage to sit on the bench. Always talked a good game Theo…

100 goals and 70 assists from 400 apps is objectively a very good return for a player predominantly on the wing. Last year he scored 19 goals. About four years ago he got an ACL injury, one of the most debilitating injuries a professional athlete can suffer, during a strong run of form. You’re a prick.

Am I the only one a bit surprised by his no. of assists?

He provided a bucket load to RVP. He was doing pretty well on the right until a switch flicked and he wanted to be a striker. TBF, with his attributes, it was only logical to try his luck up front. He probably didn’t suit our system but one thing is for sure though, you wont find many wide players that have scored or assisted the amount he did.

And ‘teammates’ who would like to see him score

And playing against different types of defences. He plays best when he’s running in behind.

I would disagree but thats not why I’m responding lol

I would have to say i agree that Theo does well in those type of games but isn’t that what the problem is with AW. I understand using players like Ozil, Sanchez, Kos for every match lets say in the Prem. The rest he should use to their strengths? He doesn’t he will just use the same lineup barring injury every game. That only works if you are Man City for example this season. Where you are in control and can dictate the game.

This really was a deal I think that suited all sides. We need to move on – Wenger clearly doesn’t like him post the Palace comments and he’s at an age where he needs to be playing. The only thing I worry is that we are going to just do a 2 for 2 swap with Walcott and Sanchez leaving. This squad needs a lot more investment than that. While I realize a deal for Malcom now might cost more than we like – how many times have we been linked for a player like this only to watch his… Read more »

Agree, although numbers-wise we actually have a very big squad. The issue for me is that there isn’t strength in depth, just depth. So upgrading on someone like Walcott, who is doing little to impact upon the first eleven, is very good.

What were the comments?

“They wanted it more than us…” or words to that effect

Me, I will add and not Theo: Guardiola and Conte want it more than Wenger.

It’s a good move for us and him. Blogs summed him up perfectly – he encapsulates arsenal in the last decade. Flashes of brilliance but consistent only in patches

The great Theo quote and I bet he still doesn’t know why it was such a silly thing to say.

Would’ve loved if the header closed with “….Sanchez….not so much.”

Not at all – on the other hand the way he gives the ball to the opposition……..

Yet,still nobody replacing the empty slot..
Ohh wait..we have Iwobi!!

Watching his goals on the main blog today I have to think if Big Sam can find a way to give him a little space and sight of goal…he’s going to bag a fair few. 15-20 a season. He knows where those water bottles are.

Whatever people say about him being ineffective, he is the last remaining player who’s stayed with us over the stadium move. And he’s carried us thru some crucial moments over that period. I’ll always wish him well wherever he goes.

That’s totally true. He was a great player for us. I am very sad seeing him left the club

And the shambles that is Arsene Wenger continues..

Interestingly Theo has only signed a 3 year contract at Everton. I will happily take him for free 3 years later as a squad player. Godspeed Theo.

Will be amazing for him to come back have a decent season playing in the cups and an odd PL game here and there and retire at Arsenal. He always seems so poised in media interactions, I wouldn’t be surprised if he was involved with the backroom staff post retirement.

All the best Theo!

Three and a half years, so he’ll be 32 when that deal expires. Given he’d have no pace at that point we’d do better to bring back Henry’s statue.

He always seems to only sign three years. I suppose his thinking is that he’ll be 32 when the contract is up and might be able to squeeze a decent money move to the MLS or similar after that.
I think it really depends how his pace holds up. Without that I can’t see anyone being particularly interested.

Good luck to Theo, he always conducted himself with such class. I personally think he had a good Arsenal career, scored alot of important goals and always offered us something different. The biggest reason why he didn’t reach a very high level in my opinion is because Arsene changed the way arsenal played post 2006… we went from a strong fast team to a very technical team that play at a slow and patient tempo which obviously doesn’t suit players like Walcott. An example would be Mo Salah at liverpool… I don’t think he would do so well in a… Read more »

Theo did some good things in an Arsenal shirt and will always get a warm welcome , but for me , he sums up modern footballers : rewarded too much for potential rather than results and resting on their laurels, expecting other players to win games. his upturn in form in a contract year always annoyed me and he hid in quite a lot of games when things were not going our way (although he wasn’t the only one). he never really seemed to help younger players around him. having said that, I will always remember his taunt to spurs… Read more »

I cant think why

I’ve been a staunch hater of Walcott. Never thought him to be of the requisite quality to challenge for the league. However to see the class of his departure, his thanking of the club, and the fact that he is a centurion means I’ll happily applaud him when he returns. He may not have been good enough, but he mocked the Spuds so he’s alright by me.

Good luck Wally, all the best.

It’s probably a good move for all concerned. I was always a supporter of Walcott, despite his tendency to go AWOL during games. The injury against S*urs in that FA cup match really scuppered it for him. He was in the form of his life, and was looking dangerous as a pacey, exciting striker, who defenders hated to play against. I always thought I’d rather have him in our squad than running at our defence. But he’s stagnated since coming back, and we need to restructure this team. I recon he’ll be great for the Toffees though, I just hope… Read more »

Theo – the son Wenger never had. On another note, awaiting his return. Just don’t score against us.

We look like shit. Theo will kick on with his career (assuming he doesn’t go offside) Meanwhile we are replacing our star man with a surplus to use United player. Deja vu? How did it work out with Welbeck? Plenty of excitement about his pace when he was signed just like now with swathes of gullible fans as per usual easily impressed. So they are happy to bring in Aubameyang and solve the issue of us having too many similar players with putting one out to pasture out wide (like say Lacazette). We already did that with Welbeck at detriment… Read more »

For the final time Welbck and Mhki aren’t the same situation.