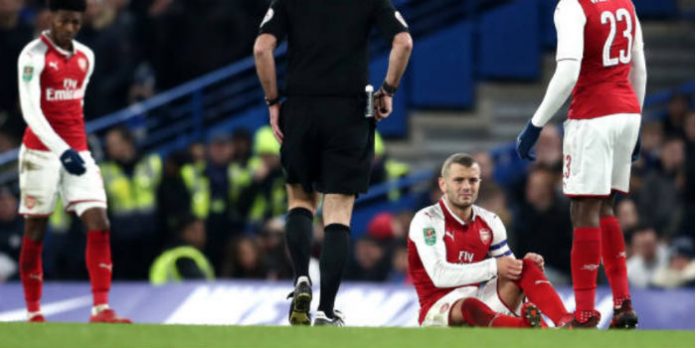 Jack Wilshere has allayed fears of a lengthy injury lay-off by confirming the ankle injury he picked up against Chelsea on Tuesday will only keep him sidelined for a few days.

The England international appeared to jar his ankle blocking a cross by Danny Drinkwater in the second half of the 0-0 Carabao Cup semi-final draw.

Taking to Twitter he wrote: “Thanks for all the messages and support after last night. Good news is I should be back in a couple of days.”

Thanks for all the messages and support after last night. Good news is i should be back in a couple of days ?‍♂️⚽️? pic.twitter.com/LDagEVnHmp

After the match, Arsene Wenger said that the player had sprained his ankle and that he wasn’t sure on the scale of the problem. Given his history of serious ankle injuries, it’s unsurprising that the boss sounded cautious.

It remains to be seen whether Wilshere is fit for Sunday’s trip to Bournemouth. The Gunners are already without Mesut Ozil, Aaron Ramsey, Olivier Giroud, Laurent Koscielny, Nacho Monreal and long-term absentee Santi Cazorla.

All the best jack.

Mein Bergkampf
Reply to  Why Not

Ah right, one of those. See you next season then Jack.

So we’re still not laughing about this then…

Not much else to laugh about

Almọnd
Reply to  Why Not

All the best Jack I want to hear that your new contract has been signed, I tired of all these contract rebellions. And I still wish to see Joachim Lòw take over from Wenger not Ancelloti he’s been sacked a lot these days and his pattern is now old school we need a modern system coach that’s what transition is all about.

It’s clear how Wenger’s mentality has rubbed off on his players over the years…
It’d be interesting to see how a coach who openly picks his nose as well as scratches his bottoms and smells his finger afterwards, would rub off on the players 😀

All jokes aside, would love to see Löw given a chance!

Luis Enrique would be a better option

That’s a huge relief! We need Jack. He unites us.

He has been the best part of this entire season. Keep fightin’ and sign da ting, Jack!

My heart sank yesterday. What a relief.

Captain Jack will be back!

Should be our captain for years to come. Proper Arsenal man

He needs to have a word with the people who run his Twitter. That photo is quite unflattering.

That’s Kane. Jackie is more “I see feet. Aim where no feet.” I know it’s a joke, but let’s observe the proper order by keeping shit where it belongs D:

Good, use those couple of days to sign da ting

I would like to see a back 4 with Chambers Wilshere in the midfield.

Chambers is technical enough to play there and just disciplined enough to not pull the pants down on our defense and run to the opposing goal which seems to be Ramsey’s MO these days.

Comedian, a number of years back before Jack’s nightmares began Wenger tried this. Let’s just say it wasn’t ideal.

That was then, no saying now, but neither of those two is best used in a defensively minded position. They’re both box-box and attacking minded. We’d need a DM behind them still.

Only if there’s a hard bastard completing the trio

Yep I agree with Wenger, once he is back in a few days he will be like a new signing.

Get back soon, Jacky Boy

A note of caution. Wait to see what the medics say and go with that.
One of Wilshere’s biggest problems in the past has been insisting he’s OK to play after a knock and then proceeding to turn a minor injury into a serious one by playing on it.

Need to see Niles – Wilshere – Ramsey in the middle

Best news of the day for me

Let’s hope so, but we all have been down this road before and will hold our breath until he is back on the pitch.