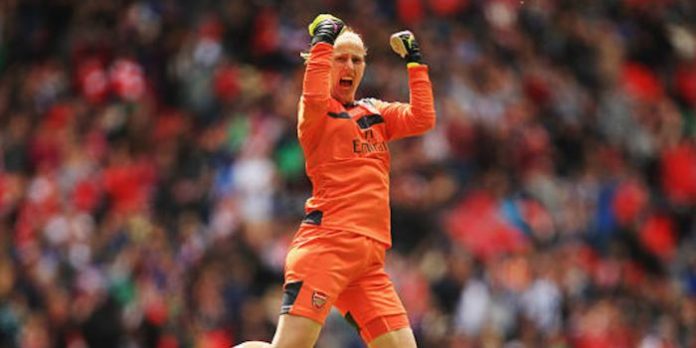 After Arsenal’s comfortable 4-0 win over Yeovil Town Ladies on Sunday afternoon, Tim Stillman spoke with Gunners and Netherlands goalkeeper Sari van Veenendaal about her three years at Arsenal, the desire to get back to Wembley in the FA Women’s Cup, winning Euro 2017 on home soil and a typical day as an Arsenal goalkeeper at London Colney.

Sari van Veenendaal joined Arsenal from FC Twente in the summer of 2015, in the immediate aftermath of the Women’s World Cup in Canada. She was handed the daunting task of replacing club legend Emma Byrne. Byrne, a winner of 1 Champions League, 11 league titles and 10 FA Cups as Arsenal’s custodian, had just seen off competition from England goalkeeper Siobhan Chamberlain, who left for Notts County that summer.

Even aged 35, Emma’s stock was incredibly high, but Sari reflects that Emma’s presence at the club was a help rather than a hindrance, “Emma was and still is a great role-model for me. She was a great goalkeeper and a good friend, I am glad that I had the chance to learn from her and she made me understand quickly what an honour it is to play for Arsenal.”

Sari eventually displaced Emma, who left for Brighton in 2016 shortly before her eventual retirement. In her place, van Veenendaal has proved to be one of the finest goalkeepers in Europe. Sari is a thoroughly modern goalkeeper, equally adept with the ball at her feet as she is with it in her gloves. “I play very much in the Dutch style, playing out from the back, that’s how I was always coached. But I can still improve a lot in this respect,” she explains.

Her style certainly fits in with new coach Joe Montemurro’s vision for possession based football. “He has real clarity about how he wants to play. We are working every day on how we want to play and that means playing out from the back. It’s important that we do this in every game, even if the pitch is difficult. It’s on us to own our style.”

van Veenendaal joined the club alongside Dutch international teammate Dominque Janssen. Fellow compatriots Danielle van de Donk and Vivianne Miedema have arrived subsequently, creating a small Dutch colony in North London. “It’s always easier for your adaption to have people around you from your own country,” Sari admits, “But when you’re playing for Arsenal it doesn’t really matter where your teammates are from. Everyone at the club made it really easy to settle in.”

Arsenal have undergone a rapid programme of professionalisation during van Veenendaal’s time at the club. Dedicated analysts, nutritionists and fitness and conditioning coaches are all part of the backroom staff- as well as current goalkeeping coach Steve Smith. Arsenal Women have operated as a fully professional outfit in this time and it’s reflected in Sari’s daily routine at London Colney.

“We start every day in the gym to do a little bit of rehab and some exercises and strengthening so we are ready for training. Then I have around 30 minutes of specific goalkeeper training with the other goalkeepers and the goalkeeper coach. There we focus on different aspects of goalkeeping. Some days it is crossing, sometimes distribution, sometimes shot stopping.

“Then we join the rest of the team for a session where we usually focus on something specific, like defence or attack or setpieces. We train hard every day!” Sari explains, puffing her cheeks out for emphasis. When I interviewed Emma Byrne in 2013, she explained that the girls only had 1 day of training per week with a goalkeeping coach and otherwise, Emma, a qualified coach herself, would take sessions. The top level of women’s football has progressed swiftly in the intervening 5 years.

Arsenal take on Millwall Lionesses in the FA Cup 5th Round on Sunday at Meadow Park. Sari and the team are spurred on by the memory of the 2016 Final, where they defeated Chelsea 1-0 at Wembley. The Dutch stopper says that the win has been her proudest achievement since arriving at Arsenal and the chance to play at Wembley again in the final on May 5th is a huge carrot for the squad, “No doubt about it, that was definitely my best day as an Arsenal player,” van Veenendaal affirms.

“We know we have to take Millwall very seriously, they are going very well in WSL 2 and cup games are always a bit different. But we will be sharp and ready for the game and we really want to go back to Wembley again because it’s a huge honour to play there.” Whilst the FA Cup in 2016 remains a cherished memory, Sari’s life changed in 2017 when she was an ever present in the Dutch squad that won the European Championships on home soil. Van Veenendaal was also named in the team of the tournament.

“The day of the final is probably the best day of my life,” she recalls with relish, “The crowds for the games and for the celebrations were just amazing and will stay with me forever. It was great for the country, but it was great for women’s football in the Netherlands too. Now we want to take the next step, we are still not quite where we want to be, we want to keep building on that for the World Cup next year.”

Regaining the FA Cup and winning the World Cup feature in her more immediate ambitions. But given how Sari has conquered the challenge of replacing a club legend, winning a cup final at Wembley and winning the European Championships on home soil, you wouldn’t bet against her achieving them. Whatever van Veenendaal’s career throws at her, she has a habit of catching.

Arsenal Women have two home games on the horizon. They play Millwall Lionesses in the FA Cup 5th Round on Sunday at 2pm, before entertaining Everton in the WSL on Friday, 23rd February at 7.30pm. Both matches will be played at Boreham Wood FC’s Meadow Park and tickets can be purchased here, or else they are available on the turnstile on the day.

I still miss Emma Byrne in goal – can you say that nowadays? 🙂

I have a cunning plan

I’ll admit I don’t know much about the Womens team but is there any tangible reason as to why they haven’t won the WSL or the UCL in the last 3-4 seasons?

Am asking this cuz I routinely read that this Arsenal Womens team has some top top class players at the very top of the women’s game?

Stillberto
Reply to  I have a cunning plan

Largely, it’s because Manchester City and Chelsea have enormously upped their investment (sound familiar?) The competition is fiercer than it’s ever been. That said, I am certain Arsenal have the highest wage bill in the WSL, so while they are in no way outright favourites to win it every year now, they have underperformed in the league and are doing so again this season (sound familiar?). The last manager left in November because of this. So basically, Arsenal, Chelsea and Man City ought to be in a 3 way tussle for the league every year, but Arsenal have been a… Read more »

Could be our chance to win silverware this season COYG

Thanks for this, Stillberto. Always good to hear from and about the Women’s team on Arseblog. More please 🙂
Looking forward to Sunday and hopefully an easy win.