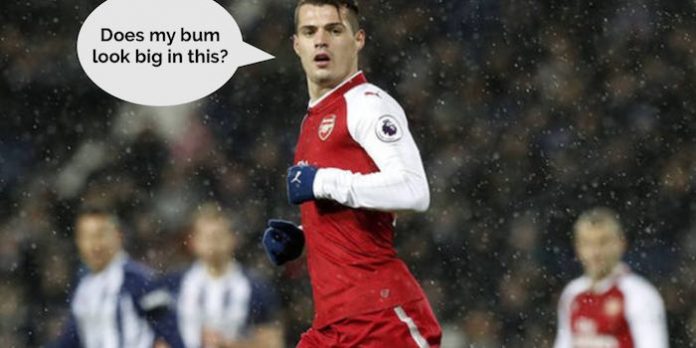 When Arsenal paired red shorts with their red and white home shirt against West Bromwich Albion in December, it was the first time we’d sported such a combo since 1978.

It now looks as though we’re doing the same thing in the League Cup final at Wembley.

As was the case at the Hawthorns on New Year’s Eve, our opponents on Sunday – Manchester City – wear white shorts with their home kit.

We know what you’re thinking, surely players can tell the difference between red shirts and blue shirts? And yes, they can (sometimes, when we’re not playing sh*te). But apparently, the colour clash between shorts, and indeed socks, is more of an issue for the officials, particularly those who are running the line and making tight offside calls.

Quite why Arsenal are the ones changing their kit stumps us. As far as we can tell we’ve been drawn as the home shirt so it would make more sense for City to be the ones to change. Perhaps Per lost a game of rock, paper, scissors?

Who knows. It’s not exactly a major thing, but certainly unusual.

Golly, I thought we lost the “Does my bum look big in this?” joke along with “Garlic bread” “Only me” and “Booyakasha” in the depths of post millennial memes and gifs. We really should have.

City got knocked out of the FA cup … hahaha

Hopefully we can knock them out of the Carabao cup next …

We don’t have a great record in all red….. so if we lose its entirely down to that

We drew against west brom in all red…and prior to that was a very long time ago so I dont know if we could blame the kit. We could blame arteta instead? But we are going to win 2-1 so its irrelevant.

What colour the underwear? Surely we should stick with red undies else our panty lines will be showing and we can’t have that can we? We are the Arsenal and we have class and panty lines are something Sp#ds do…no I didn’t bring a coat but I had a flat cap..damn! where is it now?

WHY our colours are WHITE SHORTS, and as such WE should stick with white shorts, this is a disgrace

Why can’t either side wear their away kit? Weird stuff.

Maybe the contrast between city blue and white isnt enough?

Sadly, the contrast between us and City is all too significant at present.

As much as I’m not blind to the myriad failings of our club and glorious leaders, Manchester City do have the unlimited oil wealth of an entire nation state behind them. That certainly doesn’t hurt.

Can’t dispute that @Exiledgooner. However, they also have a brilliant coach at the moment who is bringing the best out of his players.

I remember we wore all yellow a couple of seasons back, was it in the champions league (whatever that is…)?

yeah. It was that game against Barcelona where van Persie got sent off for not hearing the whistle, if I’m not mistaken.

Glad you brought that Van Persie red card up… still livid about that all these years later.. that ref was an utter utter bell end ?

Wasn’t that also the game where Bendtner’s first touch should put him clear on goal, and yet he ends up passing it to Mascherano?

Put through by jack?

Funny. the Denver broncos only wore blue jerseys and blue pants once when elway was qb because he thought it made his ass look big.

The mental image of the BFG and Kompany engaging in a game of rock, paper, scissors is a rather good one.

Pretty even contest, as long as there’s no turning involved.

What on earth is a ‘Field Blue’.

Not gonna lie, I do like the red shorts and home top combo.

Not traditional I know, but I do like a bit of change sometimes. Ask the manager.

It reminds me of Liverpool. Plus, we should decide on ONE shade of red for our shirt. Just pick one and stick with it FFS.

Since we’re about to look like Liverpool, any chance of sneaking Oxlade-Chamberlain in our ranks or is he still playing shite?

But wasn’t he playing alright for us towards the end when Wenger stuck him on the wing away from his preferred position? Did he get his wishes granted at Liverpool? Haven’t followed up on it so it’s a genuine question.

This season feels so long. Every week feels like an International Game Week break

I agree. It’s been probably the least exciting season in very long time. We were out of the title race so early, top four seemed out of reach rather early and no UCL. Granted we have a cup final coming up bit I don’t remember being this bored of a season so early.

Are they short shorts?

Maybe it’s something to do with “comic relief”

I don’t think Welbeck will start.

Who knows? He might go out there and start hoofing them in at will. Then again he might not. Probably not.

It’s not that awful blue strip so we stand a chance!

Full kit wankers accross the land cry out in anguish.

Who comes up with this rubbish?

Its also times like these you would think the away team would play in their away kits..

Apparently the EFL has had a change of heart, and we’ll have white shorts, thank God.
https://www.efl.com/clubs-and-competitions/carabao-cup/about-the-carabao-cup/carabao-cup-final-match-information/