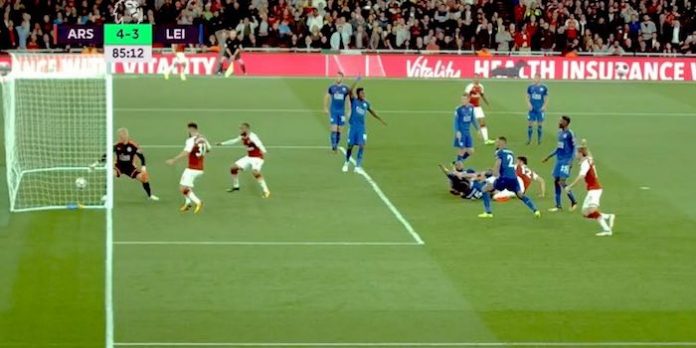 Arsenal’s game at Leicester City, originally supposed to take place on March 18th, has now been postponed because of the home side’s FA Cup commitments.

They’ll be playing a 5th round tie that weekend, which means the Premier League fixture will have to be rescheduled.

Hopefully, the Gunners will still be involved in the Europa League, which will complicate things and add to an already hectic fixture list, but that’d be a good complaint.

Arsenal, of course, beat Leicester on the opening day of the season, an Olivier Giroud goal gave us a 4-3 win having been 3-2 down at one stage, but it was a game that also showcased our defensive frailties.

Frailties which have been apparent throughout this campaign. Nevertheless, we have a decent record at Leicester in recent years, so hopefully whenever the game is played we can take three points and make that pointy-faced old witch Jamie Vardy unhappy.

I just watched *that* Danny Welbeck’s goal against Leicester yesterday. What a significant moment it could have been.

Coquelin scored this weekend. He never scored for Arsenal, did he?

Even a blind squirrel finds a nut every some often, doesn’t really mean too much. I would have liked to see Jack and Coq play together before he left but I guess Wenger had other plans.

Unless we play a really really bad team like ostersunds, xhaka is playing in that midfield I’m afraid.
I actually am afraid. Xhaka scares me

We need to start picking up away from home, our record isn’t good enough.

But at least we can spend some of our new record-breaking Emirates sponsorship.

I see you are starting rather early today. Glad you never miss an opportunity.

I hope this means that on the day that would have been the original kick-off our players get what would effectively be a ‘snow day’. All the players round at Per’s parents house eating tuna and cucumber sandwiches, drinking 5Alive whilst taking turns trying to beat levels of Crash Bandicoot on a battered old PSOne. With other moments such as Jack turning up late and showing off his new roller skates his mum took him to buy, Santi giggling all the way round on the bus as his Ghostbusters back-pack is full to the brim of nudey mags and Johan… Read more »

Well, that is the first article published in some 3 days at arseblog news. Anyone else thinks that blogs is past it?

If things continue at this rate, one can’t help but think that his position would soon become untenable. We’ve become laughing stock, repeatedly pressing F5 to no avail. Granted, there haven’t been many news since we are out of the cup, however any blogger worth his salt would tell you that you don’t just wait for news – you make them!

Lol. Love this comment, it gave me a good chuckle

Life isn’t the same without Olivier

we have defenders that cant defend, that’s the reason we have conceded so many panalties