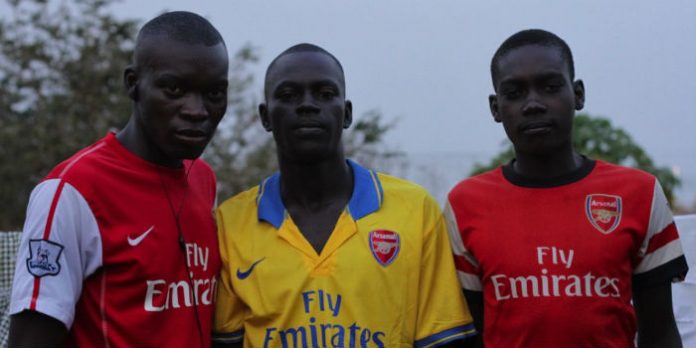 Arsenal could be set for a pre-season visit to Uganda, according to the country’s National Council of Sports.

Bosco Onyik, who chairs the body that regulate’s Ugandan sport, told Chinese news agency Xinhua that a new partnership with the Gunners, set to be ratified in March, will also see the Premier League club open a local academy.

“We went to London last month on January 16th and had three meetings with management of Arsenal FC with the aim of partnering with them,” explained Onyik.

“We agreed that they will train some of our coaches, give the Uganda Cranes chance to train at the Emirates Stadium in London, build an academy and also have their team to visit in June next year to tour Uganda and play some matches.”

There were plans to tour Nigeria in 2012 but that was shelved due to security and logistical concerns. To apologise for the cancellation of the game in Abuja, the Gunners sent Per Mertesacker, Tomas Rosicky, Lukas Podolski and Bacary Sagna to dance. There was a promise at the time that the club would return for a game in 2013, but that never materialised.

More recently, in 2017, the Arsenal Foundation partnered with the Family of Hope – a school for children with special educational needs – to build new football pitches in Uganda.

We’ll keep you updated if we hear more on this story, we’re also waiting on confirmation of Arsenal’s participation in a friendly in Singapore.

Link to the dance
https://m.youtube.com/watch?v=boxeamVa7Sg

Bfg is so impressive in the above video .

The mans just such a pro!

Good stuff from the fans’ perspective. Though I preferred it when we had pre-season camps in Austria (from memory) and we had all the team together, getting set for playing with one another, rather than knackering them out travelling around the world on tours.

This is going to be the best thing to ever happen to me ever since I started supporting Arsenal. Uganda and it’s neighbouring countries in East Africa are by large the biggest supporters of Arsenal in Africa

Uganda probably has the most Arsenal supporters in Africa and the gunners would be the first major PL team to come over. I know the support will be overwhelming if the trip materializes – it will give the club and (I hope the players in particular) a sense of how truly global a club The Arsenal has become.

Sorry to kill your excitement but playing a game of football here might not happen. There’s a reason why we are simply unbeatable at Namboole. Apart from the atmosphere, conditions are too unbearable for visiting teams and the turf is an insult to a potato garden. Especially after being overloaded with league games. Nigeria didn’t have the logistics and we definitely can’t compare. From stadia to the medical care which is almost always the sticking point for teams on tour. I’d be over the moon to watch the team but I suspect it could be a reserve/academy squad playing at… Read more »

So you prefer pre-season games that you cannot actually remember occurring? Sounds like you do not want the team to go to Africa because you are a racist.

Accusing someone of racism is a serious thing. Especially when they haven’t said anything racist.

I think you owe Pedant an apology.

The pre-season camps (see above, not games) were in the years that we won lots of stuff and made a great start to the season. So I’m keen on them.

And I grew up in Nigeria, so no to your accusation of racism, which says more about you than me. Given you don’t know me at all.

You are a gentle man #Pedant

Shiiiiiiiit I don’t think that’s why we have been playing like a bunch of Wankers. It’s turned into a global game and such a visit does alot in a kinda of a thanks to the people from some whom of those crazy salaries are being collected from. I for now will be anxiouslt wait for that visit. We shall show them that said country belongs to the red and white of London

if arsenal is to keep any of the soul of the club(if there is any left), they need to double down on these kinds of deal/projects. Will also help to keep the players feet to the ground, only living in the teenage millionaire world is not healthy.

Considering Uganda is a country where homosexuality is against the law and men and women are killed because of who they love, how does this work with the ”Arsenal for everyone” campaign, ”Kick it out”, etc?

Maybe it’ll be a catalyst for change

When you consider that we’ve just extended a sponsorship deal with a brand that is wholly owned by the government of Dubai, where homosexuality is illegal, then…well, you’ve probably got your answer. Unfortunately.

And where modern slavery is actively encouraged.

A P
Reply to  Serpent

‘Everyone’ doesn’t just include people who approve of LGBT.

Serpent
Reply to  A P

Homosexuality is not a choice, homphobia is.

moonie
Reply to  A P

There it is. Sweet ignorance. Was wondering why the comments were decent.

Crash Fistfight
Reply to  A P

Yes, let us welcome all forms of prejudice. Come one, come all!

I’m sure there must be other things happening in Uganda that the club opposes but in this instance, only the football brand matters. After all here in Nigeria, Arsenal is sponsored by a popular beer. In the same way as the UEFA champs league is sponsored by Heineken. I don’t hear the muslims complaining about it. And yes we frown at homosexuality in these parts but to each his own. We all follow the Arsenal strictly for the football.

Arsenal circa 2018 are all about “values”

Homosexuality is not illegal in Uganda. That’s not to say attitudes towards homosexuality are positive; there is a clear problem. However, the World Cup is in Russia this year, also a country where people have been killed for who they love. Should we boycott the World Cup?

The thing I hate about some people in the “developed countries” is that your governments have developed a tendency to think and reason for you. Whatever your media puts in front of you you blindly follow. Firstly there is no law against homosexuality in Uganda. The only prohibition is a provision in the penal code which is clearly against it and has never been changed and guess who put it there BRITAIN Yes GREAT BRITAIN colonised us and left us with the only provision against homosexuality! And nobody gets killed here for that despite the spin from your media. I… Read more »

Sorry, but most of this is just not true—you can’t just pretend that documented anti-LGBTQ violence hasn’t occurred because you’d rather it hadn’t. As a U.S. citizen, I recognize your rhetoric of “marginalized group is REALLY a lawless, financial windfall” as all too familiar.

Give me that example please. Which documented case?

Before flying out to Uganda, please make sure to bathe Ozil in Malarial prophylaxis medications. He tends to get sick a lot

During a world cup year? Stupid.

DB10\'S+Air+Miles
Reply to  The Swede

I think it said next year to be fair.

Why is India not even on arsenal’s mind? Even if we safely assume that 99% population follows cricket, 1% still amounts to 15 million, which I am sure is comparable to football following population in southeast Asian countries which Arsenal frequently visit. This in spite of the newly appointed marketing head being an Indian!l.. wonder what’s working against India’s favour..

The number of Arsenal supporters in India is huge, next only to ManU, and may be Barca. The average Indian football fan is young and upwardly mobile. I have no clue why they never come to India. Every Indian Gooner will pay top money to watch them.

Maybe the fact that the 15 million are spread over 3.3 sq kms? Besides these tours are primarily part of partnership deals wherein the local partner foots the bill so unless the Indian partner shells out a significant sum, Arsenal aren’t going to play in India.

When will they visit south africa. Come on arsenal