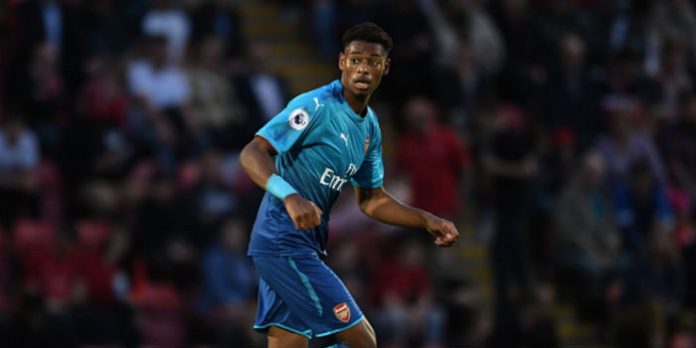 Jeff Reine-Adelaide joined French side Angers yesterday on loan until the end of the season.

The attacking midfielder showed a lot of promise in his early days at Arsenal, but has been hampered by injuries and this spell is a chance for him to get back on track, as well as develop from more regular football.

He has gone with the blessing of Arsene Wenger who has told him to make the most of his chance, and to come back stronger and ready to push for a place in the first team.

Asked what the manager had said to him, The Jeff replied, “He asked me to work hard in Angers, listen well and come back stronger, more mature.

“I know that many people think that I should not have gone to Arsenal so early, but I have no regrets.

“Arsene Wenger gave me opportunities with the first team, then I had physical glitches. He then helped me a lot to come back, and I want to say thank you [to him].”

And the 20 year old outlined what he was hoping to get from his spell in Ligue 1.

“I need to improve my statistics,” he said. “It’s important to be decisive and help your team win.

“I also have to progress tactically, which is why Angers is a good club. There is a different style than that of Arsenal, it will allow me to develop at that level.”

Arsenal confirm departure of The Jeff in permanent move to Angers

Hope he can progress to be as good as we all would love him to be.

Could challenge Mkhi if all goes well imo

Bit of a stretch with Iwobi and Nelson bith ahead of him.

If Jeff is as good as his potential then he has no worries with Iwobi.

V is for Vic Akers

rising and promising talent. the injury god is cunt.

You know you are special when you are ‘The Jeff’ and not simply Jeff. I still remember Jeff embarrassing De Bruyne when we played Bremen in the Emirates cup. Look what De Bruyne is doing now. I know The Jeff will come good if he stays fit. I personally believe he should focus on sorting out his position on the pitch. Wenger sees him in the Diaby role but Wenger always sees everyone as a midfielder because he has got a free flowing tactics. IMO Jeff is either a Richarlison/Martial type left winger or he is a De Bruyne type… Read more »

If team play isn’t his thing he can become a LW? If he ins’t a team player he can stay in Angers lol

Encouraging that he’s taking about improving tactically and developing. A lot of young players go out on loan and only really mention ‘getting game time’, implying that their not really there to learn massively from their temporary coaches

The University of Angers has a pretty good summer course in statistics so Le Jeff’s gonna get good.

He’s a special talent. I hope he puts his head down and goes to work with Angers. Ligue 1 is a great place for developing young talent he just needs the work ethic to match the talent level and we’ll have a very nice player on our hands in the future.

I would really like the Jeff to develop the defensive side of his game because he has the stature of a box to box powerhouse.

The Jeff is a special talent no doubt in my mind which is why despite his ‘troubles’, he still remain a firm fan favourite. Like most young proteges, there will be ups and down in his development and fans and club just have to bear with him. When you are blessed with that much natural talent, there are bound to be some flaws, especially at that age. I will however still put my money on him ending up a top top player for us….under no circumstances should we even consider selling. We will regret it, like serge!

I agree, in his few cameos I think we saw promise of a really classy midfielder. I thought last year he and AMN were the most impressive in the cup games. They’re both so composed and just have calm quality you like to see in midfield.

Don’t push yourself to much in Angers, you will lose your Happiness.

He needs to go there and learn a lot, but then come back with no regrets, and Dont Look Back at Angers.

Manage your anger while in Angers?

Its good that we’re addressing our lack of Angers.

I feel that people are so quick to jump to conclusion like “he’s a special talent”. We have seen many “special talents” over the years, like AMN, Reine-Adeleide, Nelson, Akpom, Nketiah, Iwobi, Holding and so many more. A couple of nice step over, some nice dribbling moments and perhaps, an assist or goal and voilà, we got the next “special player” in the making. Newsflash: I don’t recall any youngster, for the longest time at Arsenal, truly becoming a special player. Last one I can recall is Fabregas. It’s good to be an Arsenal fan and support the team but… Read more »

There was that cunt called Cole.
Jack is still special just hampered with injuries.
Chesny was special on his first loan.
Oh and Fab never played for the academy.

Wilshere has been a special player from the Academy. So has Bellerin.
Akpom will never be good enough, but Nelson has REAL talent and great technique. The issue, is that Wenger has played him as a RWB so far and not given him to freedom to flourish as an attacking RW or AM like he has for the Youth Team.

he’s been great recently for U23s.

This loan will do him good. He’s an excellent near future potential for attacking midfield.

Also feel we should be sending one of Mavropanos, or Holding out on strong loan till end of season.

Whatever some people want to say about Mustafi, he is still one of the strongest options at the back considering what else we have in stock.

These younger Players still have to develop. I expect Mavropanos, Holding and Chambers will be vying for two spots next season so one may be cut.

Don’t look back in Angers tho the Jeff!

On young players – just so you should know if you watch some recent games with AMN involved, he is as guilty as the same sort of negligence in NOT tracking players into the box as the oft criticised Granit. And you would like to risk playing him in midfield for something different??? I don’t follow the logic. We need experience and responsibility to balance midfield. Maybe a deeper lying Mhkitaryan who is more aware might do the job maybe even Song if he should impress in training first but surely not AMN AMN is Rback cover. Let him continue… Read more »

No can you please explain in detail about calum chambers experience at Arsenal please.