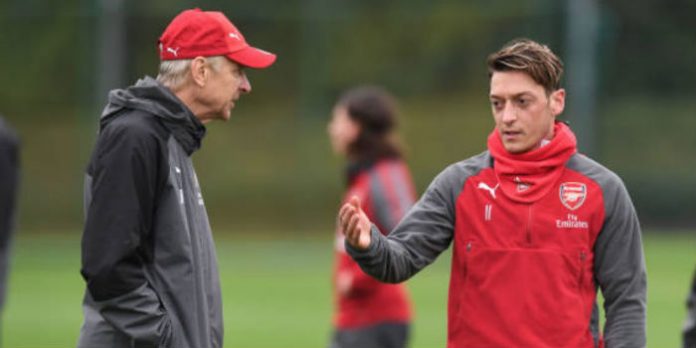 Arsene Wenger says Mesut Ozil decision to commit to Arsenal on a new long-term contract is great news for the club and that he’s expecting the German to lead the club to new success.

Ozil will earn around £230,000 a week after penning a three and a half year extension at the Emirates to put to bed months of speculation about his future. Coupled with the signings of Pierre-Emerick Aubameyang and Henrikh Mkhitaryan, it’s been an exciting few days for the Gunners in the transfer market.

“He has committed his future to the club in a period where are in a tricky position on that front, qualifying for the Champions League.

“You expect from him that he becomes a leader and takes responsibility to lead the team to success.”

He added: “It is [like a new signing]. Many predicted he will not commit and not sign for us.

Overall, it’s good news for us. When you look at the transfer market today, the fact we can keep a player of that calibre is of course good news.

“The fact that he committed for a longer period shows as well that he will help to lead the team on the pitch.”

As was the case with Ozil, Jack Wilshere is out of contract in the summer. Having already seen Alex Oxlade-Chamberlain and Alexis Sanchez run down their deals, it’s a trend that Wenger expects to see occur more often.

“You’ll see players, more and more, going to the end of their contract. I said that many times.

“Why? Because there is expecting inflation on wages, the demands are so high that you cannot always give in.

“Sanchez example, is a big one. That does not mean you don’t try to extend the contracts early enough, we started a long, long time ago.

“At the end of the day, you can accept the demands or not. That will happen more and more, especially with the level of the transfer market.”

Got to get Ramsey next.

Why would you want that. He is an above average player who could do well for a mid table team but no where near good enough to play for a top side. Unless you don’t want us to show some ambition and get back to the top.

Two good games out of the mediocre rest is not good enough.

What was he in 2015-17: Well… injured half the time 🙁
He had a very good run this season and was doing really well until he got injured again. If he somehow stays magically fit for a season, he can be instrumental in our success… but that’s a big “IF”

He started 23 premiership games last season and scored one goal in the last minute of the last game of season. I think he had two assists. Please stop the bollox.

I remember both Wenger and Ramsey mentioning the importance of him sticking to the basics and doing the simple things right as the reason for his brilliant 2014 season. I think Arteta was another reason why he looked so good that season. Since then i think Ramsey has become a bit like sanchez in the sense that he always wants to provide that killer final ball or be in the box to score. The problem with that being our exposed midfield, especially in the absence of a proper midfielder to play alongside him. We can get away with that in… Read more »

I know it’s become trendy to have a go at Sanchez at any opportunity, but Ramsey is nothing like Sanchez in any way shape or form.

Ramsey had one good half a season a few years ago. Since then, nothing.

And in case i’m accused of being a “hater”, i dont hate the guy, i have no reason to, since i dont know him at all as a person, he’s quite probably a nice guy, just not good enough for a title challenging team, which is perhaps why he’s still with us.

What do you have to say about his contract situation today?

A Different George
Reply to  Stringer+Bell

Ramsey is deadwood. Should have gotten rid of him this January instead of Giroud. Still it hurts to see Giroud in Chelsea side forced to speak good for them.

yes, ramsey , jack and holding , have to keep these players

Stop messing about with Jack and give him a new deal please.

Rumour is coming out (from sensible people) that he’s pushing for another manager (Owen Coyle, from his time at Bolton), but the board don’t fancy risking upsetting Özil.

Owen Coyle? We do smoke some great stuff here at the Arsenal…

I need some of what you are smoking ?

GK, DM & RB for me. Our defenders are not bad, just exposed. Some protection and a vocal keeper could go a long way in helping defensive organisation

You’re forgetting a new manager too…

I’m a long time Wenger admirer, but now feel it’s time for him to hand over the reins to someone else. The player’s look like they need a change of voice to refocus them on their purpose. It doesn’t matter how good you are – if you keep doing the same training week in week out, parts of the brain switch off – new stimulation is required to get the best out of the squad. Open to whoever….

Not that it makes much difference… Because…. we’ve got Ozil! Mesut Ozil! I just don’t think you understand!

Usually, when ppl quote player salaries, they don’t mention whether it’s pre or post tax. What should be our default assumption in such cases? Pre or post?

I think generally agents report pre tax to show what a good job they are doing. Teams report post tax to try not to mislead potential players.

I could be wrong.

What is Auba and Mhki salary 180K post tax?

The overall tax on ozil is 35-38% as far as that adjusted figure shows, which is actually quite low for the bracket of earnings. No idea what British tax codes are like, but I’d assume the rate is largely the same for all those people earning annual median salaries on a weekly basis

Whatever it is, it’s still more than everyone writing in this blog is going to earn this week – all put together!

Joke’s on you; I just robbed a bank.

Am I reading this correctly? Wenger basically says they started comfortably early enough with Alexis but couldn’t afford him? If that’s so, why not sell him earlier on our terms.

The question is would you have been all this happy commenting had we sold him when he still had two years left on his contract? Wouldn’t we have all gone berserk?
Should have moved him on in the summer but the point is we got a decent deal for Sanchez at the end of it all and so should move on.

The truth is Wenger was ready to sell sanchez . But he needed a good replacement for him to reduce the blowback from the fans resulting in year long long transfer negotiation lemar mahrez . But since we can’t wrap up both those transfer often because of petty discounts we couldn’t sell him.

I think we would have sold him in the summer if City had made the offer earlier. Leaving it to the last week gave us problems.

I was waiting for LANS.

I am not disappointed.

Sick of Wenger and his depressing, lame, so what comments.
That shouldn’t mean you can’t properly coach the players you have….Wenger can’t coach a team, the players know it and we’ll finish 6th.
A better manager would finish higher up the league with this squad.
If we’d never signed Lacazette, Giroud or Walcott would have scored the same or more goals playing centre forward…what was the point!?! £52m pissed up the wall.
Wenger a pathetic joke.

You are a disgrace to your federation.

Are you trying to call him a cheat?

Why is Wilshere’s contract extension taking so long?

The contract is recovering from an Achilles surgery I hear.

Off topic but Xhaka had to disable comments on Instagram because he and his family were receiving death threats and abuses.

Love or hate him, sending death threats to him or his family is completely unacceptable and reflects very poorly on our fan base as a whole.

In our mad rush for success and glory, we sometimes seem to forget these people are humans and have emotions as well

Not all players have the mental strength of Giroud, who came back stronger, despite our fanbase abusing him left,right and centre in the beginning

The so called fans like these need to go back to school or whatever holes they crawled from. Death threats ..really that is sick.

It is embarrasing , the bottom line is > its a game of football, you win some you lose some..

Im sure most of these fans dont perform electrifying daily in their jobs either. We are humans not robots.

Its sad when fans/trolls resort to abusing players and their family like this.No one deserves that kinda abuse. Not even the mourinhos and terrys of this world.

Do you think his numbers would be greater than any other manager?
I doubt it, it’s what pretty much every manager and most players say in these situations.

Um, no, you don’t expect Mesut Ozil to become a leader.

He’s not going to, because that’s the one thing he’s always been awful at. You might as well expect him to perform open-heart surgery.

I thought we were paying him the money to continue being our main creator – you know, the thing he actually can do?

Good News and job get done. Ozil can take over Capt band and lead the team to SUCCESS.
” he becomes a leader and takes responsibility to lead the team to success ”
I am 100% sure he will lead team to more success when Mr Wenger made Ozil club Capt.

This really takes the “whole new signing” thing to another level.

is it just me or wenger trying to channel inner pulis to solve our def problem by donnin’ a cap? :-/

The return of the LANS

“IT’S just like a new signing” now where have I heard that before???