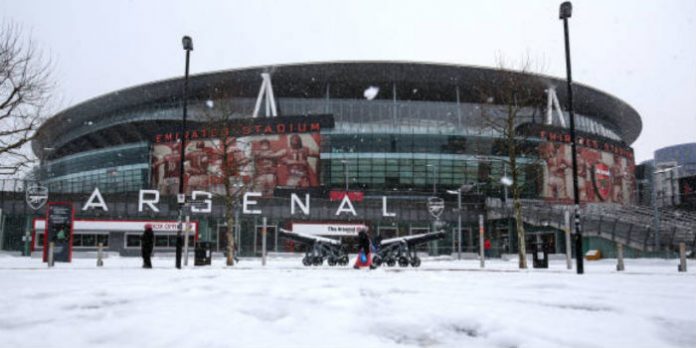 Arsenal have told fans to keep an eye on the club’s official channels today for updates on whether this evening’s clash with Manchester City at the Emirates will go ahead.

London is currently experiencing heavy snowfall courtesy of the so-called ‘Beast from the East’ and there’s little to suggest the blizzards, gales and sleet are going to stop anytime soon.

While the Emirates turf is more than capable of handling the deluge, fears about supporter safety around the ground and possible transport disruption are likely to be the pivotal factors. Various authorities, including the local Islington Council, will make a decision later about whether the 7.45pm kick-off can proceed.

The last time a game at the Emirates was cancelled due to such circumstances was in 2010 when the Gunners were due to play Bolton Wanderers.

Given our form, the fact Pep Guardiola’s side walked all over us at the weekend and that our best player, Nacho Monreal, is injured, it’s fair to say many fans are keeping their fingers crossed for a postponement.

Wenger: It was a human adventure for 22 years

Wenger: I see a bright future for my successor

Can we just like finish the season now due to snow?

I have 3 City players in my fantasy team, this match has to absolutely has to go on. Might as well win a league since Arsenal isn’t interested

Please save us snow

I ain’t going to be happy if it’s called off now. I’m just leaving home.

This should have been called off already. Trains and flights are all up the left, so how do supporters get home. Bearing in mind how poor we are right now I’ll not be braving the elements to go.

Completely agree, from when there are no travel services to allow fans to attend, the game should be called off. Either that or refund/season ticket credit etc.

One million percent the fans are the small cogs in this well oiled business ?

Play it today, the fancy dans of Man City won’t be able to stand the cold weather like our extremely tough players, who never flinch at a challenge.

Just remembering the halcyon days of last week, when I sat frozen, nearly alone in my whole row, watching us lose to Ostersunds and thought “this is the most grudgingly-attended football match I’ve ever been to.” Could really blow that level of misery out of the water tonight!

Erm, not to be negative, though.

Fernandinho is injured as well. They’ll miss him even more than we will miss Monreal.

Only Pep injuring himself that bad that he can’t coach ( not that I want that to happen) would save us at this moment from City. Or snow.

A Different George
Reply to  PatJ

I think Fernandinho is their only non-replaceable player. They have no one else who plays that Busquets role. (We have no one, full stop.)

But who would score our goals?

They have so many plug-and-play solutions Fernandinho being out wouldn’t help us one bit.

I still favour the option of city not arriving on time and us winning it without even playing.

I’m pretty sure we’d still find a way to concede a goal.

gooner
Reply to  The Peter Simpsons

No worries. We’d learn from it, take positives from it and focus on the next game because it’s the most important.

Kudos on the accurately weird grammar.

WWTC
Reply to  The Peter Simpsons

Thats because Sterling will be in an offside position; it doesn’t matter if he isnt playing and on the bench.

Had to smile at a poll on Arsenal.com – apparently 37% of us think City will win by 3 goals tonight. Another great idea from our wonderful pr team.

Even the writer of this article has felt the effects of Arsene Wenger and the clubs woeful perfomances. Hoping for the game to be called off because of bad form.

Most you lads never been to a game

How do you know that bigman?

Banning someone for insulting you is ok blogs, in case you needed fan support.

One Dennis Bergkamp
Reply to  Goonerink

It would be interesting if we could ban people democratically. What would go first? Hate or Stupidity?

mpls
Reply to  One Dennis Bergkamp

Ideal time to play them, probably be complacent after the stroll they had on Sunday.

We are probably complacent after dismissing off City’s goals as ‘soft goals’, ‘avoidable goals’, ‘Minor concentration lapse’.
So I’m expecting us to concede real goals.

I for one would feel more confident.

We are nothing but a bunch of Ostersuns to them now.

To be fair Osteruns know how to win a FK away game.

Prepare to be livid!

Ah, a snow clad Emirates Stadium, how very Dickensian – a bit like Arsene’s tactics these days..

I say we go for the WM formation tonight.

That was the first time we revolutionised English football.

No postponement. City gotta come pile on the misery. At this point, shit has gotta get even worse to get better.

The local update: I took a walk around this morning and most of the roads round the stadium are clear and all the tubes and buses are running. The only roads that have not been gritted are the side residential roads running up to Highbury Fields from the Holloway Road.

We can use the time to inform more media outlets that Jack Wilshere has to take a pay cut if he wants to stay. ?

I am an Aussie Gooner. The match here starts at around 6:30 in the morning. Infact most matches start at that time and to be honest I haven’t missed a single match this season. Right now after all that has happened this season.. I seriously don’t feel like waking up that early in the morning and distressing myself. I have a guilty feeling about it but that is the way it is.

if it gets called off it will be like 3 hours before ko at the earliest, that means you’ll get up to no game at 6 am….fuck that when even if we did play we would be abysmally depressing.

Please Mum I don’t want to go, please don’t make me, I will do anything you ask of me.

Ever been to a game lads??

For those of us that have, are we allowed to say we’d rather the game were postponed?

Ive been to a game and im from Africa lol. How ya like that??

Im hoping it doesnt get postponed though.. its not like its an exam that we could study for some more.

Love the way you’re basically having an argument with yourself here.

It will be touch and go if this goes ahead tonight. They were having a discussion about it yesterday. Although the stadium and surrounding area can handle the weather they are worried about getting enough staff for the match. They are also worried about fan and staff safety while the match is on
It’s a shame because unlike others I am glad we are playing City so soon because I actually think we are going to win because that’s the kind of messed up team we are….

Bolton? I think it was Stoke!

I hope it doesn’t get postponed..so the fans can turn up and boo the shit out of our players since supporting them to win this match won’t make a difference (we lost before kick off)..

I just want the players and manager to feel the great frustration that the supporters have nowadays..they (players & manager) have been in the comfort zone for too long that they don’t look like they give a fuck about losing anymore

(Oh no..But we have class..we’re known for our class..we can’t jeopardize that..we rather lose)
For those who are obsessed About their class or whatever..I posted it for you so you can STFU about it and talk about football

You wouldn’t by chance be in an empty room, would you?

It’ll almost certainly go ahead unless it starts snowing heavily in the next hour or two unfortunately. Roads are all clear, buses & tube running locally at least.