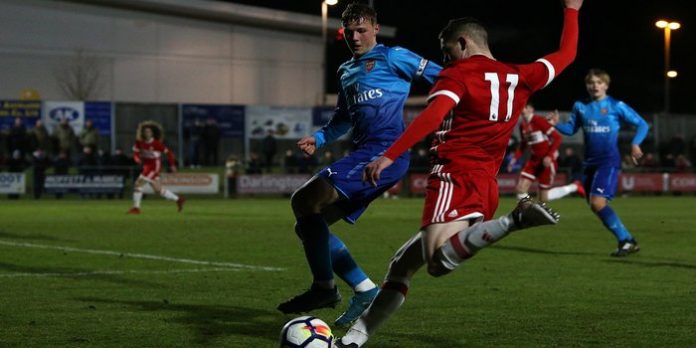 Arsenal took on Blackpool away this week in the first leg of their FA Youth Cup semi-final and it was an eventful encounter at Bloomfield Road, with the game ending 2-2, while Trae Coyle missed a penalty for the young Gunners.

Kwame Ampadu will undoubtedly be delighted that his side showed plenty of promise going forwards, with Tyreece John-Jules and Xavier Amaechi both getting on the scoresheet, and Coyle, despite his penalty miss, played some slick passes.

Of concern to Arsenal going into next month’s second leg at Emirates Stadium, however, will be the defensive display that they produced against Blackpool.

The hosts were able to exploit Arsenal’s back four all too easily, with centre-backs Zech Medley and Daniel Ballard struggling, while Tobi Omole, who replaced Dominic Thompson at left-back, was also caught out of position at times.

Right-back Vontae Daley-Campbell impressed going forwards and got an assist but he too was unconvincing defensively, although it must be said that the midfield didn’t provide sufficient protection to those behind them.

If Arsenal are to win the Youth Cup this season and end Chelsea’s dominance in the competition (the Blues have won each of the last four editions of the tournament) then they will need to demonstrate a marked improvement defensively.

Ampadu does have the option of bringing in Joseph Olowu, who is comfortable in possession and has experience of playing U23 football, in place of Ballard or Medley, but Arsenal certainly cannot afford to make so many individual errors if they are to overcome a spirited Blackpool side.

There are many exciting players in this Arsenal U18 squad, but several of them were unavailable against Blackpool for various reasons.

Goalkeeper Joao Virginia was with Portugal U21s, Reiss Nelson was also on international duty with England U19s and Emile Smith Rowe, who has been Arsenal’s standout performer in this competition this season, is set to miss the majority of the rest of the campaign through injury.

Virginia will be back available for the second leg, which should help to improve Arsenal’s chances of keeping a clean sheet.

Nelson, meanwhile, hasn’t featured in the competition at all this season but if he was to be selected for the second leg then it would certainly boost Arsenal’s chances of winning the Youth Cup for the first time since 2009.

Sounds about right then. It’s not arsenal if we don’t have a rocky defense and our midfield don’t offer much protection. Easy transition for them to the first team when they’ve developed.

Arsenal seem to have a endemic problem with developing defenders and defensive midfielders.
When was the last time a defender came through the academy and into the senior squad, Ashley Cole?

It’s the way we play, our philosophy. Tends to favor attackers on our team and unfortunately attackers from the opposition.
Defensive based teams tend to produce better defences and defenders.

Song – I mean we sold him to Barca. Never seen that coming

I watched the highlights of this game on Arsenal Player…the defensive errors were so bad that you had to cover your eyes and then go and have a lie down in a darkened room afterwards. Having said that though we do have some up and coming talent.

well what do you expect with a manager like wenger

Andy Mack
Reply to  believe me

It is endemic. We do not coach defence

Further evidence of a systemic problem in our style and development.
How can the same issues that has plague the first team for years, regardless of the many iterations of the team, also be evident at all levels of the academy?