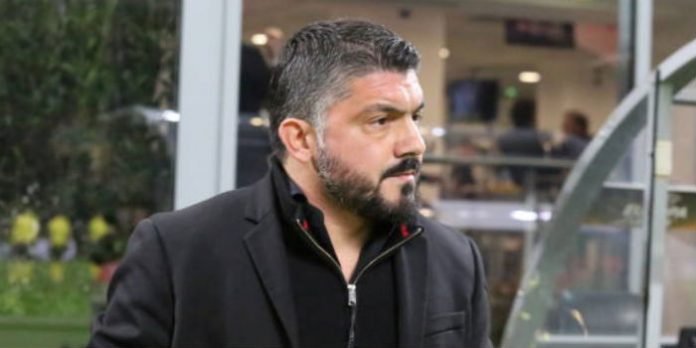 AC Milan coach Gennaro Gattuso says he got his side’s tactics wrong in their Europa League first-leg defeat to Arsenal but promises that his players will fight for the jersey in the return game at the Emirates on Thursday.

Goals from Henrikh Mkhitaryan and Aaron Ramsey secured a 2-0 win at the San Siro that puts the Gunners in a commanding position, however, having been given a scare by Swedish minnows Ostersunds in the last round they know they can’t rest on their laurels when the Serie A giants visit.

“After Thursday, I heard a lot of nattering that you hear in the pub, about how we were lacking something physically, yet here we are coping right through to the 95th minute.

“We just got that game wrong against a strong Arsenal side. We realised that and today we responded.

“Arsenal have the quality to put the ball where they want if you give them time and space.

“We cannot give gifts to anyone, the team has understood that and we go forward with those lessons.

“We’ve still got a 30 percent chance of going through and we’re not going to London for a holiday. We need to respect our glorious shirts.”

Bellerin: Everyone is sad for the boss

And..In case you feel like shitting in your pants, you dont have to. Spurs are getting a toilet ready..

Somebody needs to photoshop his face to a ‘fat angry kid being spanked’ picture.

We ended up giving them a spanking too.

They definitely got the tactics wrong in the first leg but coming at us won’t help them in the second leg. Looking forawrd to it.

Let’s hope Deeney left some for him

A Different George
Reply to  the only sam is nelson

He was some player though.

the only sam is nelson
Reply to  A Different George

well so was (is?) Yaya Toure, who certainly looked like he eventually got that birthday cake from Man City when he came on against us the other week.

yup. It’d be perfect if we managed to sign a 25 year-old Gattuso for next season. Ain’t nobody messin’ with that dude.

We really need to respect this game. I’ve heard lots of people being over confident that we’re already through. With our season in mind, conceding 2 goals would hardly be the biggest surprise.

I know, we’ve seen it so many times before. I remember being in the stadium 3 nil up at half time to Anderlecht.. and we fluffed it and somehow ended up drawing the game. and lets not even mention Newcastle.

Soooo yeah.. we easily have it in our locker to completely balls this up.

Concentration is key, get the first goal, and the tie is pretty much done and dusted.

Stuck on repeat...
Reply to  IamaGoober

Agree with other comments on here that everything he’s said has been both respectful and accurate, and aimed at motivating his own team and their supporters. I don’t put it past us to botch this either. Sorry team, I can only base my opinion on what I have seen this season. To be safe we need to score 2. If they score 2, it will be even on away goals. If we score once & they somehow manage to get 3, then they still qualify on away goals. Fully support the team on Thursday, for they are entirely capable of… Read more »

AC got their tactics wrong in the first leg, just like Ostersunds they will give us a tougher 2nd leg.

Apart from being wary of bad defeats, we also have a problem of freezing & conceding at the start of key games before we start playing our game.

If we start the game sloppy and concede early, it would be a whole different game.

We need the Arsenal of the old mentally to turn-up. There is plenty in our team to get the result.

So true, just imagine how fucking nervy it’s going to be if they get an early goal.

We need to be full-on focussed. Hopefully we can grab one ourselves and put it out of reach.

You’re not getting one either, Gattuso.

We have seen too much of his face in the first leg as the camera man kept showing him in every possible opportunity, now we will probably hear too much of his voice even before the game starts.

You got the tactics wrong? Perhaps it’s the other way around, and we got them right? I hate it when people don’t give others credit when it’s due.

No one ever gives credit. When we lose its always the handbrakes fault, or the refs, or Fat Sam’s.

To be fair he did get his tactics wrong, but that doesn’t mean we didn’t deserve to win. I only wish we had scored more goals, but then we would probably become complacent as we so often do.

Talk is cheap Gatusso! You’re in for a serious ass whooping in London. Come On You Blazing Gunners!!!

Haha..i like Gattuso’s poetic narratives. But you will suffer on Thursday mate. We will hunt you down as the boys have picked up momentum

Not denying that AC Milan are a glorious club in their own right, but we’re going to dump them out.

Another 2-0 to Arsenal…at least. Then you can have a short miserable holiday before you and team go head back to Milan.

With all due credits to your rejuvenated AC Milan team, you will get your holiday after being knocked out.

Don’t get some of the negative comments about Gattuso. He has all but been respectful of both Arsenal and Wenger in his interviews and he did praise our first leg performance. And to be fair to him, Milan did botch that game a bit – they definitely can play better than that. As for the rest of the comments I am reading, well, I am also confident for Thursday, but we aren’t through yet. The more respect we give to our opposition, both on and off pitch, the better.
COYG!

Everything he’s said has been both respectful and accurate, and aimed at motivating his own team and their supporters.

I’m with you. Over confidence and Arsenal, whether its from players or from fans rarely works out well. I do think we are the better team, but when has that ever stopped us from throwing it all away or at least making things difficult for ourselves. Word is that Gattuso’s job is already on the line…so both he and Wenger have a lot to prove….who will blink first?

Actually Gattuso’s appointment came with no guarantee he will be in charge next year. He has done a great job so far after the Montella debacle, and his stance has always been “this is a dream for me, I’m enjoying the ride, then we will see”. I wish him the best in the serie A and I hope Milan can shine again after many very, very dark years. Good luck to him… except on Thursday!

Welbeck was decent on sat.

It sounds to me like he’s sending his team out to give us a few hard kicks. Lets hope we have a decent ref for a change…

Indeed. You can get the next few European breaks off and holiday somewhere warmer!

I respect my glorious shits!

People always talked about Floyd Mayweather Jr. and his ‘computer’, you can beat him in the early rounds but the computer starts working and he changes up his style and then he wins. 2-0 up at half time let’s not take it for granted. They’ve had a good look at us now. He’s right to say we had too much space and time, and he’s giving them a 30% chance to progress, all sounds about right. We had better be taking this one seriously.

The first goal we’ve to score at any cost,if it’s them oh god 🙁

A 30% chance? How is that calculated?

That’s right Gattu, you are heading to London for a beating!!

I just hope that all our season ticket holders turn up to support their team in an important game.

that’s a great way to put it Gattuso. 30% chance. cos if you score 3 goals, and each goal is worth 30%, you’re going to go through, provided we don’t score (which is the remaining 10% chance i assume). Well, we’re going to score, and oooooooospina’s gonna keep a clean sheet.

Why did this bring up the image of Gattuso walking into an Italian pub with murderous eyes after a match and all the “nattering” immediately stopping as soon he walks through the saloon doors?

So Wenger, Gattuso and Troy Deeney walk in to a trattoria…

I kind of watched the Genoa v Milan game last night and in all honesty both teams were not that good. Genoa scored but it was rightly ruled offside. They looked to be the stronger side but lost their concentration at the end and I was screaming at the TV because I could see the Milan goal coming. I didn’t expect anything when we went to Milan and was pleased but mostly shocked at the result. I think they will give us a tough game on Thursday.

I can’t help but love him.

Though of course I hope we win 3-0 and keep up this momentum.

i can’t wait for this match, COYG!