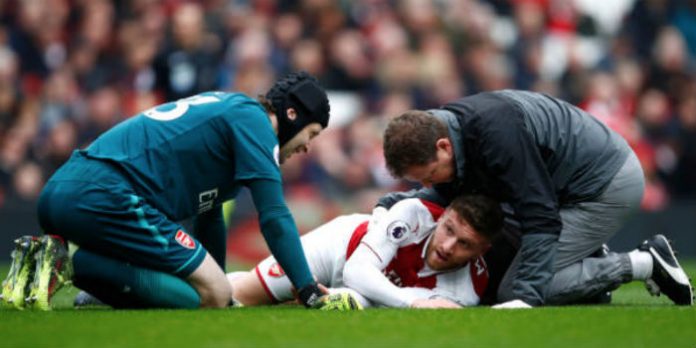 Arsene Wenger says Hector Bellerin and Nacho Monreal could both feature against AC Milan on Thursday as they work their way back from knee and back problems respectively.

Bellerin started last Sunday’s defeat to Brighton on the bench before missing the trip to the San Siro and today’s 3-0 win over Watford, while Monreal hasn’t featured since being substituted in the first half of the League Cup defeat to Manchester City.

“Bellerin is in quite a good way,” Wenger revealed on Sunday. “He could be available for Thursday, yes. And Monreal as well.”

Given the Europa League represents the Gunners best chance of making next season’s Champions League, Wenger admitted that some first team players were rested as a precaution for the visit of the Hornets.

He said: “I made six changes. I wanted to preserve some players, like Koscielny, who has a little calf problem. With Ramsey I was cautious. Wilshere had given a lot on Thursday night, we had a very physical game on Thursday night.”

While Mesut Ozil appears to have come through today’s game unscathed, despite a kick to the ankle, the same can’t be said of Shkodran Mustafi, scorer of the opening goal, who had to go off after the break.

“It’s a groin problem,” confirmed Wenger when asked about the centre-back. “We don’t know how bad. They told me they have to check tomorrow.”

Win the game against AC, it would feel like we’ve turned a (not the) corner.

It would be great to end the season with a cup and entry into CL. Wenger may feel he is leaving the club in very good shape.

Yet he could have left on a high after each of the last 3 FA Cup wins – and did not. I’m worried that if we eventually win the EL (and let’s not get too ahead of ourselves – it’s still a very long way), he’ll use it as a reason to continue.

If we win Europa he is not going anywhere

We ain’t gonna win the Europa unfortunately, depending on the draw I can see us getting to the final but ath Madrid will beat us

That’s only if Atletico reach the final themselves…

Have some faith, man!

yeah – of COURSE Atletico will reach the final!

I am waiting for the Holding-Diego Costa rematch.

i am starting to believe that they have begun to put people in place to ease him out, and if they can get in the right coach, they will ‘forcibly retire’ him this summer.

Just for the record: I absolutely want us to win the EL, just don’t think he’s the man to take us no matter what the outcome of this season is.

Let’s be honest here, if we won the Europa you know damn well him and the board will use that as an excuse to stay. “I always honor my contracts blah blah blah” while they all pocket millions for another year if we’re lucky. By lucky i mean I could see him getting an extension well before being cut a year short especially if he won the cup. UCL achieved after all the diversity would be the headlines coming from the emirates hierarchy and himself I could grudgingly see it now.

I don’t think AW is staying beyond this existing contract. So he either leaves at, the end of this season or the next.

I agree but in a slightly different way. As he stated that the uncertainty of his position had caused a problem last season, so the plan was (I believe) to finish after only 1 season of this contract, or this summer to extend the contract by a further season (if he wanted to and the results justified it) but for both sides to know that it was only ‘for show’.
I suspect that some of the players understood this and have underperformed as they think he’s leaving this summer anyway…

Well he’s already said he’s honouring his contract so, if Arsenal DID win the Europa, him staying wouldn’t be for that reason.

Just like losing,winning becomes a habit. So let’s keep on winning.

Hope Mustafi picks up quickly, he’s started playing better and we need him.

Am I the only person that thought Rob Holding played well, I can only recall a single mistake but numerous blocks and clearances.

He was excellent today. Let’s hope he gets back to last season’s form.

Generally speaking, we have good players. Sure they are not all world class, but often they lack the discipline to perform at their best. But if they can solidify as a unit, as we have seen over the last week, they can do something special. That’s what those 3 FA cup wins came from. A desire to win for each other and the manager – plus Aaron loves a Day out at Wembley – but none of the teams that won those FA Cups we would consider to be of 11 world class players. Sure there are maybe 2 or… Read more »

Holding looked great. I also think AMN deserves to keep his place too either as LB or RB.

That was shaping up to be Mustafi’s best game in a long time. Very Arsenal for him to catch an injury during it.