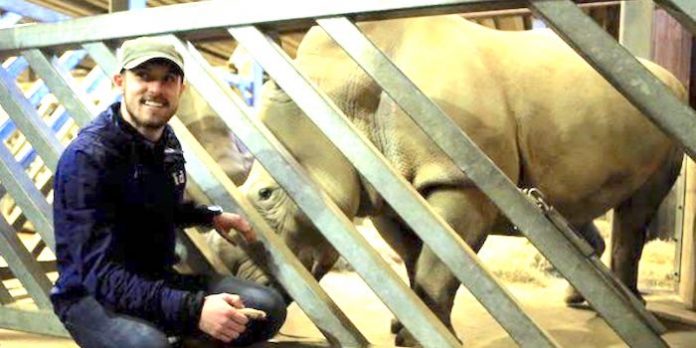 Aaron Ramsey is involved in a contract stand-off with Arsenal as he insists on an unusual clause to be part of any new deal.

The Welsh international is keen environmentalist, with a particular fondness for rhinos, and he wants part of his new deal to go to a fund which will help protect an increasingly endangered species.

It is believed that both parties were close to an agreement which would see the 27 year old extend his deal for four years, and put him on the same wage bracket as new arrivals Pierre-Emerick Aubameyang and Henrikh Mkhitaryan – who earn around £180,000 per week each.

However, Ramsey – whose current deal expires in June 2019 – was hugely affected by the recent death of Sudan, the world’s last white rhinoceros, and decided he needed to take a stand.

A source close to the Ramsey camp told us, “Aaron has asked that 5% of his salary be paid to the Rhino Conservation Fund, which is a hugely generous contribution – especially on the terms offered by Arsenal.

“However, he’s been hit with resistance from the board and legal team who fear that this could open the floodgates and create issues with the tax authorities.

“Charitable donations are deductible from income tax, but when it’s at this scale, it can cause a ripple effect.

“They are worried that players will see this as a way to siphon off funds to charities, religious institutions and their own personal foundations.

“They’ve seen criticism of some of the top players in the world who have fallen under scrutiny for similar schemes, and are refusing to make it happen.

“Aaron is very upset by it.”

In recent times footballers have begun to demonstrate a greater social conscience, with Juan Mata’s ‘Common Goal‘ charity urging players to sign up and donate 1% of their salary to good causes, and former Australian international Mark Viduka setting up a wildlife reverse for disabled wombats.

With question marks over the future of Jack Wilshere, the Arsenal midfield could need serious reconstruction if they can’t agree terms with Ramsey and he decides to move on elsewhere.

Meanwhile, the Gunners have been strongly linked with a summer move for FC Köln goalkeeper Timo Horn.

Not totally unbelievable but obviously not true. Had to check the date to make sure

It’s naughty people like you responsible for extinctions of dodo and other wildlife… Nobody is bigger than arsenal? Have you seen the size of those rhinos?

That is brilliant mate

Saving Rhinos is a serious issue. Western black Rhinos are extinct, northern white rhinos is about to, southern white Rhinos , Javan and Sumatran are less than 100 in numbers. Only Black Rhinos and Indian Rhinos are in comparatively better position.

Do you even know if this is true Steve? I think it is an April Fool story. Typically, so-called Arsenal fans are already insulting Ramsey.

Now THIS is the perfect Internet reaction.

Anyone who thinks differently must be a SJW/
Rhino nuthugger.

Rhinos can defend their territory. What are you talking about?

Umm you have seen the date yes?

Unless this is satire…

lads – have ye seen the date?

My tax lawyer, Loof Lirpa, has confirmed this is, in fact, true.

There are implications as regards National Insurance (Social Security) deductions too.

Salary Sacrifice is a usual way of addressing such charitable deductions at source, (utilising Gift Aid) however – this is usually only the situation for those on standard PAYE (i.e. not wealthy footballers)

Get rid of their horns then.

Similarly, I’ve been experimenting with snails, taking off their shells to speed them up.

But it actually makes them more sluggish.

I thought Stan Kronke likes to shoot endangered animals ??, off course ‘rhino clause ‘ is off

Well he can.t shoot them if there are none left…maybe Rambo and him are working together on this

Was wondering what was going on, till I clocked it was April 1st.

This was good. Borderline believable

I don’t even know when to take your articles seriously anymore ??

It should simply be an after tax deduction .. charitable donations are often like that .. the employee may be able to claim it as a tax credit later, if allowed.

Curse checking Arseblog news so early in the morning! For a second there….

This is in poor taste and I’m offended. Even on April fools day, there are things you don’t joke about. I like a joke as much as the next person, but I’m here to be offended on behalf of everyone.

Those poor poor arsenal fans, led to believe for a moment that Aaron Ramsay had all but agreed terms.

Everyone seems to berate sportsmen for being greedy now one showing a conscience is being berated for it, surely we can praise his attitude and hope he and the club can find a way through, This is the kind of person our kids should be seeing as a hero

To be honest I fell for it too. Till I read the comments.

But Mark Viduka and what? I knew it was classic Bloggs here

You got me, blogs. You got me just as clean as Bergkamp’s turn.

I can’t decide whether this is real or an April Fools’ joke. If it’s a joke, it’s in rather poor taste; if true, I think the club would be right to refuse such an caluse in a contract. Aaron is free to make whatever arrangements he likes with his salary, give it away, spash on a new car each week, save it for his retirement, whatever. It shouldn’t be a contractual arrangement with his employer. It’s nothing to do with Arsenal.

I just lost my horn after reading this.

Just send the bloody mo ey yourself after you get paid. Problem solved.

This one was good. At first I thought this will be a funny post, but as I read on, the article was so well written I was wondering if this could actually be true. Then I read Timo horn, and I remembered what day today is

If Aaron Ramsay wants to donate some of his wages to help save rhino’s then I salute him. Arsenal should do everything they can to help him. If they don’t, we don’t deserve him. Good on him.

But surely disabled wombats are more worthy of his help?

If he was that upset about it he would pay the money after tax. Sorry, but this is utter nonsense.

I hope it’s a joke, not because of the “rhino clause” bet because of suggestions that Ramsey could earn as much as Mkhytarian or Aubameyang

It is a very good stand taken by him. I want him to add a clause to include all the other colours especially blue rhino, green and pink.

Reminds me of the ‘Dali sees a rhinoceros’ scene from Midnight in Paris:
https://www.youtube.com/watch?v=_q1V_xjHhLM
Are we allowed to share tangentially related stuff in the comments on this website? I rarely see it…

Mark Viduka IS a wombat