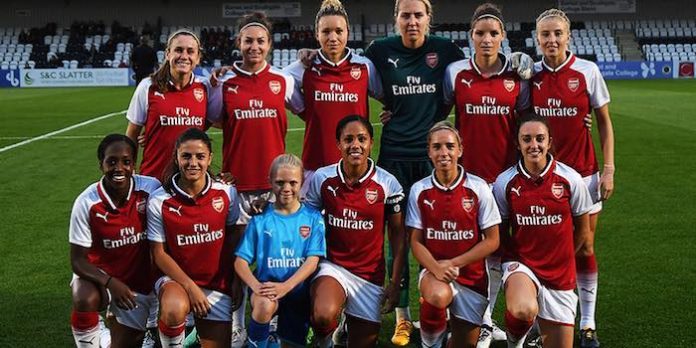 With 13 points taken from the last 15 available, Arsenal Women have been looking up at a wobbling Manchester City and leaders Chelsea in the WSL Table. But very quietly, the Gunners have actually slipped into 5th position, behind Birmingham and Wednesday night’s opponents Reading. Arsenal have two games in hand on both sides and would overtake Reading in the table with victory at Meadow Park.

However, the Royals have become a force to be reckoned with in the WSL this season. They defeated Arsenal at home in the Conti Cup group stages earlier this season and held the Gunners to a 0-0 draw in the WSL in January. Only a last gasp Jordan Nobbs winner separated the sides in the Conti Cup semi-final earlier this year. Encounters between the sides have been water tight.

Reading won at Manchester City recently and are the only team to take points off Chelsea away from home. They are a formidable prospect and Arsenal are coming off the back of a draining FA Cup semi-final against Everton on Sunday, which required a last minute Louise Quinn winner. The Royals are full of confidence at the moment. But so too are Arsenal.

Montemurro’s squad bagged the Conti Cup last month and have booked a date at Wembley in May for the FA Cup Final against Chelsea. They currently sit 5 points behind Manchester City in the table, with a game in hand and City still have to come to Boreham Wood in May. Arsenal have everything to play for and are in fine form themselves to boot.

Jessica Samuelsson, Josy Henning and Anna Filbey are unavailable for Arsenal with long term injuries, while Vivianne Miedema still has not totally shaken off an ankle problem- the Dutch striker was only fit enough for the bench on Sunday. I would expect Arsenal to be more or less unchanged from the team that beat Everton, with Danielle van de Donk possibly coming in for either Heather O’Reilly or Dan Carter if Montemurro was minded to go back to a midfield diamond.

PLAYER TO WATCH
Lisa Evans has been reinvented as a roving right back by Joe Montemurro in the absence of Jessica Samuelsson and with Alex Scott a bit part player. Evans has always been considered a right sided attacker, but the move to full-back has proved to be a clever touch from the Australian coach. As a former right-winger, Evans understands how best to link with her full-back.

She forms an especially impressive link with Heather O’Reilly when the American plays on the right hand side. The pair often combine on the overlap, as they did notably for Dan Carter’s tap-in on Sunday. I think the Evans and HAO partnership is greater than the sum of its parts, with both players almost playing as dual wing-backs.

GOAL! It's @ArsenalWFC who break the deadlock as @DanielleCarter converts from close range to put them 1-0 up against @EvertonLadies. ?

Reading are especially strong in the middle of the pitch, so the Gunners’ best avenue for hurting them could be down the flank, where Evans is proving to be a real asset as an attacking lateral. The Scottish international has taken to the position so well that she started for her national team at right-back last week, despite having never played in the position before January of this year.

SCORE PREDICTION
I am opting for a narrow 2-1 Arsenal win, goals from Mead and Nobbs for the Gunners.

HOW TO CATCH THE GAME
The match kicks off at 7.30pm at Boreham Wood’s Meadow Park. Tickets are available on the door at £6 kids and £12 adults. The match is also being streamed live on the FAWSL Facebook page.

We would like to expand our coverage of the Arsenal Women’s team on Arseblog News, so you may see a few more articles on the team before the end of the season. At the moment, we are thinking that, as well as the monthly feature interview which we have been running for some time, we can produce match previews like this one for each game, as well as short reaction pieces after most of the games from a player or the manager.

There are other things we could explore too, like live blogging matches that aren’t being shown elsewhere for example. There are a handful of matches left before the season ends on May 20th and we will use them to experiment with our coverage a little, but we would also like to hear from you!

If you have any feedback or suggestions for what you would like to see, do leave them in the comments section below, or else on the Arseblog Facebook or Twitter pages and we will see what we can do.

Big fan of the arseblog and all the work you guys do to keep our faith (and questions!!) in the arsenal.
I am an advocate for women in football and worry for those i see who are dismissive, they are really missing out man!
Please don’t be shy to post about the wider work in and around the club, Womens football, outreach work, AGM, supporters groups etc.

Love the women’s game, and they’re definitely outperforming the men this season. Stoked that the game will be streamed on the FAWSL page – been wanting to watch them all season but being a Yank its hard to get to the games in person…

I went to the occasional Arsenal women’s match 20+ years ago and the quality wasn’t great. From what I’ve seen, there has been a vast improvement in the game since then and the skill and competition level are now really high, which is great. Having said that, whilst I do read the Arsenal women’s articles on here at the moment, I might not if they become more frequent, simply because I don’t really have the time in my life to follow two teams! But that’s just me…

Bring it on. Women’s football is moving in the right direction, but there’s still a long way to go, so more attention is definitely a good thing.

The coverage for our women’s team is in shortage, so what you guys are proposing would be really welcome.
Interviews, match reviews/coverage/goals, reactions and maybe player write-ups, general team news?
Thanks for all the content you have been ‘feeding’ us so far too. 🙂

I would be interested in more reviews on the youth and women’s Teams if each preview comes with a where is it how much is a ticket how can I buy it . With that I can say to myself I could be there and even if I’m not have some emotional investment . Richard

that is a good idea… Bring it on