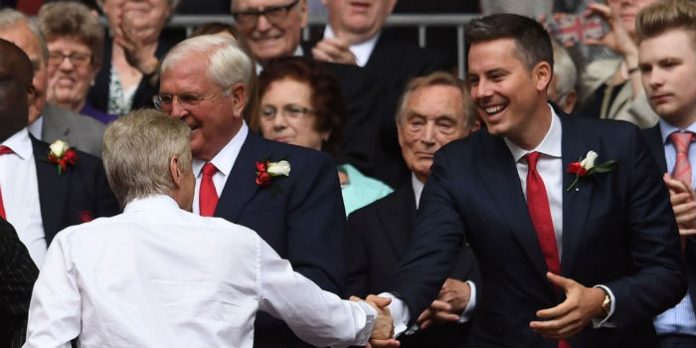 Kroenke Sports & Entertainment have confirmed that Josh Kroenke has been promoted to vice chairman of KSE and KSE UK.

Josh, the son of Arsenal majority shareholder Stan, is already the president of both Colorado Avalanche and the Denver Nuggets and sits on the board of governors of the NHL and NBA respectively. He also has a role as alternate governor for the Colorado Rapids and is co-owner of Overwatch esports team Los Angeles Gladiators.

That’s on top of the director position he has at Arsenal. He’s seemingly a very busy chap.

Several outlets, including the Mirror, reported recently that the 37-year-old spent much of February shadowing Ivan Gazidis at the Emirates as he conducted an in-depth review of how Arsenal is run. It led to suggestions that he could take over as chairman from Sir Chips Keswick this summer.

In light of this latest development, it looks as though Kroenke Jr will have an increased hands-on role higher up the chain of command at KSE, but suggestions he’ll be involved in the daily nitty-gritty at Arsenal could be wide of the mark.

That’s not to say he’s not going to be an influential figure in the future of our club; KSE UK have repeatedly made clear that they will not sell their stake in Arsenal (despite apparent approaches).

On the responsibilities that come with his new position, Kroenke Jr said: “While the business of sport has transformed in recent years, we are still just getting started.

“This new position allows me the opportunity and flexibility to work closer with employees, fans, sponsors and community leaders to strategize and celebrate the power of sports and entertainment.”

He added: “I am particularly looking forward to sitting down with entrepreneurs and technology leaders to bring innovative platforms to connect and engage our millions of fans around the world 365 days a year.

“From our venues to our teams to the fan experience, I am incredibly excited about the future of KSE and about working with all of our teams and businesses to create memories that keep our fans coming back time and time again.”

There remain whispers of an impending boardroom reshuffle at Arsenal, but it’s very unlikely anything will happen before the summer. Take Josh Kroenke out of the equation and the average age of those on the Arsenal board (Sir Chips Keswick, Ivan Gazidis, Ken Friar Lord Harris of Peckham, Stan Kroenke) is just shy of 72. Younger blood is certainly needed.

Deep joy. I’m so overwhelmed with a swell of happiness flowing through my soul, at this magnificent news.

I’m relishing how often he mentioned bringing success to this club, on the pitch.

“…to create memories that keep our fans coming back time and time again.”

He loves hollow speeches, I should say.

He can afford and has media army back office(spin doctors). He is trained to say nice meaningless statements. That is not the case here though. His emphatic message is that his family’s franchises(toys) are balance sheets. No more, no less.

And that includes a 53 year-old, Gazidis.

Are we running a nursing home or a football club?

If age is such a detriment, how do you justify supporting the 132 year old AFC?

Because it is a small fraction of the way through its life.

Sigh. Remember when football was fun? The ‘big match’ on itv Sunday afternoon. 8 quid to stand on the clock end. The long ball game. Flick ons from Steve, diving headers from tone. Being in division one. Take me back.

What would be people’s thoughts on Wenger moving to the board?

I would be more than happy with that

He’s not old enough yet.

Under no circumstances. It will be difficult enough for the new Manager, without that.

I used to make fun of Chelski, but I really can’t any more. Better to be the plaything of some billionaire who desperately wants the club to win for the sake of his own ego rather than an investment for a billionaire who only cares about profits. This stuff really takes any romanticism out of being a football fan. Just depressing.

A Different George
Reply to  PersonFace

How about being the plaything of a billionaire who desperately wants his money to be laundered in the UK?

Is this the technology which found Mustafi and Xhaka? It’s like playing Championship Manager and you can only see the stats for Long Pass and Heading.

A kid with his fingers in too many pies. I’m reminded of Chief Clancy Wiggum being pulled into the hotdog machine by his tie with the retort of ‘this is going to get worse before it gets better’.

What a load of bollocks! Wenger ain’t going anywhere soon. Arsenal fans should hope they lose to Aleti Madrid. That would be the only way Mr Wenger would have nothing to stand on in the owners eyes. Look what sin lent Stan did to his beloved St Louis Rams after the just building a multi billion dollar stadium. He’s sold them to Los Angeles!

Nepotism at its finest. Josh kroenke is more active than his father in kse franchises, and helped gut their NBA team of talent, in addition to assisting the decimation of the NHL and MLS teams.

I think you are underestimating the foresight and talent that it takes to be born in the right family.

josh is schooled by his father so will the mold to be different time will tell, gazidis wanted change last year by the rumours that went around and his absence so lets hope he has influenced him to the way forward