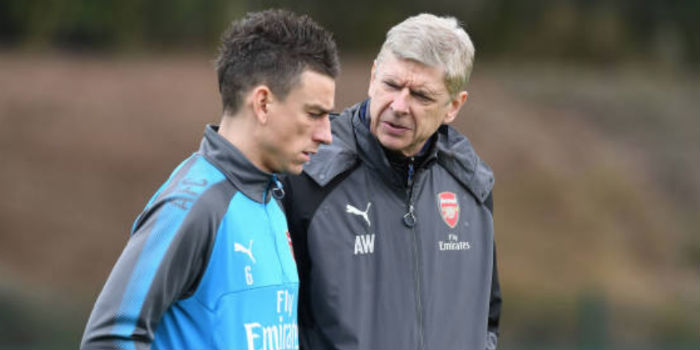 Laurent Koscielny admits Arsenal have fallen short of the targets they set themselves at the beginning of the season but urged frustrated fans to get behind the club as they pay respect to Arsene Wenger in the final weeks of his time at the club.

While the Gunners poor form on the road has killed their chances of a Champions League return via a top four finish, there remains an opportunity to qualify for the tournament with victory in the Europa League and what would be the club’s first European trophy since 1994.

All eyes will be on Arsenal when they take on Atletico Madrid in their semi-final first-leg on Thursday with vice-captain Koscielny calling for club unity and for respect for Wenger’s legacy.

“I think the boss has done a great job for this club and he’s still not finished,” Koscielny told Arsenal.com after Sunday’s 4-1 win over West Ham.

“The book is nearly finished but we have seven finals to play and we want to give him a happy end.

“He gave the chance for other players to play for this club and believes in us so now we need to do a job just for him. What he did for many years for the club is unbelievable so all the fans, all the people who work in this club and all the players, they have a lot of respect for him. He’s a great coach and a great man.

“We didn’t hit the target we wanted at the beginning of the season and we understand the fans and that they are not happy, but today we need to show our respect for one person who did not create, but helped to build the club into what it is now – one of the biggest clubs in the world.

“So now we just need to stay together and respect it.”

I’m wondering when we get a new manager, will we still play possesion based football or are we going to become mou*inho-ish club.

We will if we get Simeone who seems to be a popular choice. I sincerely hope we get a manager with the same attacking philosophy of Wenger but can organise our defence. Allegri would be the ideal man.

Will be the dream finish if we get the 6th place trophy (lol jks for those who can’t work that out).

And particularly the Europa, we are all hoping for that. Let’s totally support the team and the manager.

No, Kos: you must do the job for the fans. We pay your wages, not Wenger. Did you see that pathetic, self-pitying post-match press conference yesterday? It’s on YouTube if you fancy a watch. I’m still waiting for Le Prof to say something like: “Yes, it was about time that I left. Our performances this and last season simply wasn’t good enough.” Instead, it appears to be the fault of “negative” fans why he’s been sacked. Wenger is the Maggie Thatcher of football: a once-successful leader who couldn’t accept that his time was up. After she left Number 10 Thatcher… Read more »

Fats in his element!

The Fans don’t pay the players wages, the commercial deals and tv rights pay the wages… the fans pay the support staffs wages.

Sad man indeed. You, I mean.

“Bitter and massively resentful to everyone.” Perhaps a moment of self-reflection is in order here, Fatgooner?

Have you ever considered for just one second that keeping the club in the Champion´s League for 10 straight seasons relying almost solely on homegrown youth, while building a £400m stadium and playing stylish attacking football against oil-backed clubs was actually fucking hard to do?

It´s fair-weather pricks like you who are completely incapable of thinking long term – only looking for your next high. Take you trolling, baiting bullshit elsewhere.

STFU and get back into your cage, Fat Cunt.

Handbrakes
Reply to  A P

I bet you’re the type to send food back at a restaurant. You miserable twat

One of them is lying!
Reply to  Fatgooner

Just be prepared when the new manager can’t do any better than AW. It will be worse…. look at Man U and after SAF…Mourinho with a budget of 300 or 400 million can’t even steady the ship there. Pep Guardiola wants more players next year after spending the most this year. spurs and liverpool went through countless managers before they have found some stability and they haven’t won anything still. You think the new manager at Arsenal will win you the league or compete with the likes of Chelsea and Manure or City? You r simply delusional…

I am sick of this Wenger thing! Is it the end of football or Arsenal or is it Armageddon?
Judging by what I say yesterday there will be no”send off”! Madrid will clobber Arsenal in the semis!
Time to move on! Wenger,you made your bed,so lie on it!
I am an Arsenal fan since 1971 and I have no apology or sympathy for Wenger! This is the reality of the world we live in. If you don’t do your job well,you lose it! Simple!

You must have been sacked numerous times. Why so bitter?

I don’t think he’s bitter. I think it is the cold hard truth.

Wenger failed, so they fired him. Irrespective of the past, he was failing. So he had to go.

The only thing he failed to do is live up his own standards.
Despite this, 3 trophies in 4 years and a European semi-final to come is a lot more than those twats down the road could dream of from their #mostsuccessfulseasonsever – That is true failure.

I’m still trying to work out how three FA Cups in four years is a failure. This year hasn’t been very good but we did get to one cup final and we have so far got to the Europa Cup semi-final. A drop in standards yes, bit a failure certainly not.

It isn’t a failure. But the Premier League has been a failure for some time now and that should be our focus. The FA Cup is nice, but it is not a margin of success for the top clubs in European football. Europe and the Championship are.

You’re wrong, George! If your name is Arsene Wenger then the rules don’t apply. You can be as rubbish as you like but not get sacked. And there’ll be an army of muppets demanding that you stay however awful things become.

That’s why I’ve decided to change my name by deed poll to Arsene Wenger.

Next time I screw-up at work I’ll just tell my boss, “I’m Arsene Wenger: you can’t sack me!” And I’ll be covered.

He won more PL (old 1st division) titles than Spurs ever did.

He won more FA Cups than anyone ever.

What have you ever done?

AND I DON’T ASK FOR 10 MILLION QUID A YEAR FOR MY SERVICES!!

You are asking for a dozen tight slaps from a hundred. Each.
Until that lard drips out from your sickening pores.

So answer the question.

What have you ever done, recently or ever?

You need to be put thru the grinder.

Define awful. If you think recent seasons are awful you haven’t a clue. Relegation, being Sp*rs would be awful.

Give us something awful to compare where Arsenal are, so we can understand what you mean by awful.

Oh give it a rest George and Fats, you both really are dimwitted and lacking in comprehension (time for you to both thumb through a dictionary) I am okay with you not liking Wenger but the vitriol is ott!!!

@blogs, please can we have some news on possible Wenger replacements? Lots of rumours flying everywhere, not sure which to believe. Some info (with poo meters) will definitely come in handy

I think Koscielny next season will either be sold or be kept as a reserve. Frankly we need to add one more Cback. Wenger has accumulated too many young hopefuls none of whom have yet to prove real article. Chambers has improved since gaining more regular game time but Holding and Mavropanos are hardly going to progress sitting on the bench. I would consider putting at least one of them out on strong loan to develop. Both are still young. This Koulibaly fellow at Napoli (if price is affordable) would be an excellent fit for us and a replacement for… Read more »

but first you must do your job kos