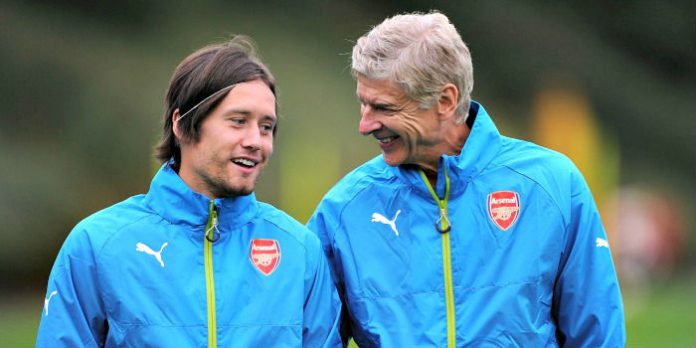 Tomas Rosicky says he’s interested to see what happens next at Arsenal as his former club comes to terms with life without Arsene Wenger.

The former Czech Republic international experienced at first hand the influence wielded by the Frenchman during a decade-long spell at Emirates and expects the club’s values to be respected by any successor.

Speaking of Wenger’s decision to step down, Rosicky said, “It’s definitely the end of a big era.

“I think there will be nothing like this in the future because Arséne Wenger was in the club for a very long time and he made a lot of hard work here.

“It will be a huge change for the club and I’m really interested how it will look in the future.

“I think they knew it has to come soon because there were some changes and they distributed competencies to different people.

“I do not want to speculate about names of future coaches but I’m sure the new Arsenal coach will have to respect the values of the club same as Arséne Wenger.”

As we reported last month, Rosicky, who called time on his playing career in December, is planning a farewell match which is set to involve lots of former teammates from his time at Arsenal, Borussia Dortmund, Sparta Prague and the Czech national team.

He’s now revealed more details about the game, including a few of the names on his invite list.

“I’m in touch with many my former teammates,” he told the Sparta Prague website.

“The first of them was Cesc Fabregas and he will be there. You can’t 100% sure if all invited players will come because there could always be some issue. He wasn’t on the national team for the last two years but there is still a possibility he will receive a call-up.

“I would like to have there players like Mathieu Flamini, Jack Wilshere, Theo Walcott or Mesut Özil but I don’t know which players will be national teams.

“From Czech players, I’m in touch with my former teammates from the national team, mainly from our EURO 2004 squad so there would hopefully be players like Jan Koller, Marek Jankulovski, Pavel Nedvěd, Karel Poborský, Petr Čech and others.

“You can’t organise the time of others so I fully respect and understand that guys have already filled their schedule with their families. I was in touch with Per Mertesacker for example but he has to be at a wedding in this time, you can’t predict things like this and it’s a normal situation.

“Another one player who I would like to see there is Santi Cazorla, for example. He has been injured for a long time but I hope he can come here even if he will not play.”

Rosicky is also pencilled in for two matches in Arsenal colours this summer. After the success of last year’s Legends game against AC Milan Glorie, the club has organised a double-header with Real Madrid to take place at the Bernabeu on 3 June (can Tomas handle two games in a week?) and at the Emirates on 8 September.

Great player, Tomas, shame it wasn’t in an era of trophy wins or he would be a legend.

Personally, there are a few players that I consider legends, even if they never won a trophy. Tomas is one of them! Style of play and personality goes a long way for me, winning goals against that lot down the road, always playing positive football with a smile on his face and always totally respectful and full of love for The Arsenal. Legend 🙂

I still upvoted you btw!

I just think that when we look back thinking of Vieira, Henry, Bergkamp as legends will be easy, for the trophies and the magic moments. Ramsey too, scoring trophy winning goals for us.

However if there isn’t that buzz of trophies he won’t be remembered as well by most. But I take your point, a great player and scored some great goals.

In my humble opinion, Tomas is more deserving of “Legend” status than Ramsey, for instance. He’s been great in periods, and scored some crucial goals, but.. maybe it’s just because he’s still with us. I don’t know. Maybe I just have fond memories of days gone by with Tomas – always giving it 100% and always smiling. It’s not that I don’t rate Ramsey, but if you asked me to name some memorable, great midfielders, I’d mention Tomas before I got to Ramsey. Weird, now that I think of it. Maybe it is indeed just absinthe.. *cough* absence that makes… Read more »

Of course. I agree on what happens with Ramsey, if he stays with us then once he leaves he may well be thought of as a legend (agreed it is too early yet).

But not if Ramsey leaves to go to Sp*rs, say, that would wreck that, like RVP to United imo.

Smiling and giving it 100% don’t get legend status though.

I would just like to point out that if you’ve ever considered a trip to Prague, this could be a great occassion! Tickets for this game should be available online. Prague is beautiful, beer is good & cheap, so are flights!

(btw i live in Prague, that’s why I’m posting such comment

I was in Prague during Euro 2004. I was in Old Town Square watching the game where the lovely Czechs came from behind to beat Netherlands 3-2 in the round robin. It was such a great atmosphere! What an amazing city.

Honestly, you were extremely lucky to witness it as it´s widely understood as the best game of football we played in the modern history. That was our golden generation – Ballon d´Or winner Pavel Nedved, amazing prospect Tomas Rosicky, Milan Baros & Vladimir Smicer who then went on to win the Champions League with Liverpool, Pavel Poborsky (used to play for United) and of course Petr Cech, who joined Chelsea after the tournament. It was us or Portugal to win that Euro, but somehow Greeks ended up lifting the trophy. Also, I´m aware that not many of you are probably… Read more »

No nonsense still, doesn’t say the sentimental things about Wenger… Dats why I like him

Will Arsene be managing the Arsenal Legends team?

Just posted that myself didn’t see your comment, would be a nice touch

He should invite RVP as well, but give him the wrong date and time “by mistake”

I’ve seen way too many vile comments against players who have sustained injury for the cause. Diaby recently tweeted his support for Wenger and someone actually had the temerity to accuse him of nicking a living off of us because of his spate of injuries. Next they will be after Santi. That Wenger has persisted with these gifted players through their injury woes shows the strength of character of the man. That RVP (arch nemesis to some) who himself sustained and injury strewn past, came out to give the gaffer the thanks that he deserves, shows up the insidious nature… Read more »

I liked RvP as a player and I totally understand why he left.

But given the geography, I hate United a million times more than I hate sp*rs. And I really hate that lot.

So to me it was a case of where he ended up. It erased anything he ever did for us in my books.

Having to live with gloating united fans and watching him win them the league, you guys can never imagine how painful that was.

So him and S*nchez can fuck off for all I care.

Who is this S*nchez you refer to?

Yeah, I’m sure us arsenal fans couldn’t understand how painful it was for you…

“Next they will be after Santi”
The times they are a-Changin.. finding creative new ways of hurting others, feeling good by making others feel bad, it’s all in fashion these days..

The Czech Republic were scary at Euro 2004

I mean lots of people will like to compare trophy haul and in that respect Wenger pales in comparison to say Fergie. But his tally of a MAJOR trophy every next season and guaranteed qualification for CL for 20 seasons running until recently is still impressive and remarkably consistent when put in context. You can understand why the Board persisted with him. MORE importantly Wenger is a builder. Where Mourinho and the likes shoe in into a ready made system with money to spend and duck back out when they hit the wall, Wenger has built Arsenal Football Club up.… Read more »

From 2004 until 2013 (building Emirates stadium) all the big clubs spent huge amounts of money to strenghten their squads. Arsenal made 20m profit during this era selling big stars.

Santori I totally agree with you regarding this well thought through post ? I watch Fergit v Wenger on C5 last night and it just highlighted what a class manager and team we have in comparison to that lot up north!!! Fergit was effing and jeffing, his players admitted to dirty tackles, divers and intimidating the ref!!! Chuckle brother even had the cheek to say we were behind them in bullying the ref – we how about we don’t stoop that low because we are a cut above ? anyway I loved hearing that Fergit and his cloggers disliked the… Read more »

Best comment I’ve read here post Wenger’s announcement. I’m sure most fans here are aware of this and remember Wenger’s achievements in the holistic way that it deserves to be remembered.
There will always be that small number of narrow minded f**kheads who can’t see beyond their limited world view. Those you find on that horrendous fan TV. I hope they soon realize that they are wasting their time here, and go support Mourihno or something.

How’s not winning anything for 9 seasons equal to just losing out every next season.. that’s not putting things in context mate, that’s skewing it..

Why the U-turn santori..?
You’ve been spouting Wenger-out b/s for the last few years on here.

I would like to see a mini league of:
Seaman/ dixon adams bould winterburn/ parlour grimandi/overmars kanu/ bergkamp wright

schezny/ lauren kolo per eboue/ edu diaby/ wiltord suker/ and the 3 best strikers of our generation: lord bendtner + fox in the box jeffers.

Team 3 would get roasted, also Lauren would be knackered playing for two sides.

Who does Lauren play for when teams 2 and 3 face-off?

Just a thought, would be nice is big Weng takes charge of the Milan games. Get the band back together

Could the 2 gods of football, bergkamp and zidane, grace the same football pitch once again?

Whenever I see Rosicky talk about Arsenal, I feel sad. It’s such a shame that injuries ruined his and Diaby’s careers. If we’d had them fit for the end of the 07/08, I believe we’d have had the momentum to stay at the top of the league until the end of the campaign. Rosicky will always be a hero who could have been a legend if he had more time on the pitch.

A Different George
Reply to  Arsenalfanman

I posted some time ago, when there was a link to a Rosicky goal reel, that there were a couple with Diaby making a brilliant pass to send Tomas free, the kind of football we think of when we think of Arsenal, and it made me so sad to think of what might have been.

People forget just how promising Diaby was too. He was a really classy midfielder and scored a few stunners to boot.

Ah rosicky what an amazing player, just wish he didn’t have so many injuries to rob us of his silky skills!!!

Little Mozart we call him.

Im available Tomas if you need to make up numbers.

I absolutely loved the Czech squad from 2004. Shame it didn’t quite work out in the semifinal against effing Greece, who of course went on to win the tournament.

On the bright side, at least they made Ronaldo sad in the final.