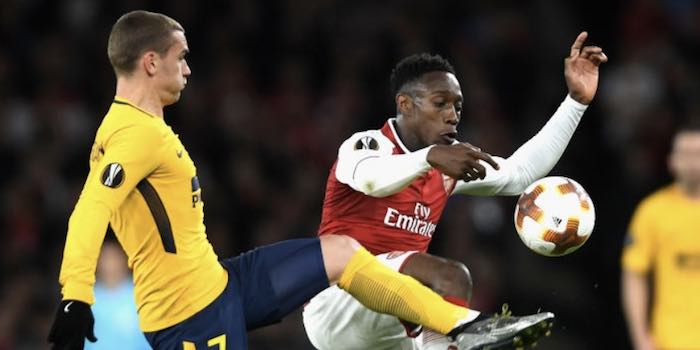 Danny Welbeck and Alexandre Lacazette spoke to BT Sport after the 1-1 draw with Atletico Madrid at the Emirates tonight.

Here’s what they had to say.

Welbeck: Yeah, it’s disappointing to take the lead and to concede a goal right near the end of the first leg, so yeah, we’re disappointed with that.

Welbeck: I’m sure we’ll do a bit of analysis on that, we’ve gotta try and make it sure it doesn’t happen again. Going into next week we’ve got to be positive, and this game is done now so we have to see what we can do.

Frustration is that you had so many first half chances, and couldn’t make them count?

Welbeck: There were opportunities there, it was there for us to score and we’re disappointed with that, but it gives us a bit of positivity going into the second leg knowing we can create chances against a very good team.

Alexandre, your goal was a great leap.

Lacazette: It was a great cross from Jack, but it’s not enough. We wanted to win and we need a great result next week.

7 goals in 7 games, how are you finding this form?

Lacazette: It’s my job to score goals, but I can’t score without my teammates. So I’m happy, I feel good.

They haven’t conceded in 11 games at home. How does this leave you?

Welbeck: Well, we know we can score against them, we did it tonight so we’re going to be positive going into that game. We know we can create opportunities, and hopefully we can put them in the back of the net.

The final is in Lyon, would that be special?

Lacazette: Yeah. I really want to go to the final, maybe the player who wants it most in the team, but we have to work to do it.

Was there pressure to win it for the manager?

Welbeck: Going into a semi-final, you don’t need any extra incentive and I said we wanted to win before the manager announced he was leaving and we want to win afterwards as well. Seeing him at the end would be the icing on the cake but we don’t need that extra motivation because we’re professionals and that’s what we’re here to do.

Simply wasn’t good enough. I had a feeling not to get TOO excited once they went a man down (AND YES HE DESERVED TO BE SENT OFF). Sure enough we failed to make them pay for that. Basically camped in their half the entire game, Wilshere was very poor, Ozil looked a bit off the pace. Hopefulyl we can regroup and do some damage at their shiny new stadium

I pray our abysmal away form won’t be a problem. COYG, we can still have to finish what we’ve started today. I still believe we will beat them 2-0 at home. Remember when in the mood we can win anybody, just turn up with the right mood and we ll be in the final. We struck fear into them tonight.

Not saying it will, but often it does …

@Anonymarse you are right. We started well to provoke the red card which made them defend like they did today. To be very honest I have never seen Athletico Madrid defend like this, not even against Barca and Real Madrid. I watch them a lot more than any other team in Spain. I admire Their team organization and spirit.

You have to admire them, they’re very good at what they do.

Mate all AM do is defend. They have the best defencesive record in all of Europe’s top league for a reason. Contrary to what people think, I feel the red card made it more difficult for us, as it made them to play to their strength which is to defend and then defend some more. That said I believe we will qualify to the final.

A very bad scenario, as bad as a loss in my opinion. The stage is set where they can simply play their game, solid defendngand capitalise on our need to score. Just a case of picking us off at the right moment.

We need to be top of our game to even be in with a sniff.

Honestly they were probably always going to do that anyway. Problem is now we have to outscore them.

Agreed but it would have been a different game if they needed to score rather than us, still extremely tough but different.

well we dont have to outscore them…. but Yeah this is gonna be hard.

Oh, what I wouldn’t have given to have Giroud as an option for this game.

I would have preferred Mkhi and Auba

I’ve seen this opinion a couple of times and I just don’t agree. Lacazette’s movement into deep and to the channels created space for Ramsey and Welbeck to move into leading to our two other big chances that Oblak stopped. Lacazette also won just about every header I saw him go for. Giroud would have stood still in the box and added nothing to this game as there was no room in the box to try his little flicks

So deflating. This defense needs a complete shake up at the end of the season. It’s sad to see Koscielny becoming error prone after being such a boss for us for so many good years.

We need a core of defenders next year to challenge. Including a new goalkeeper.

Let’s hope we can get that away goal ourself next week. Surprised not to see Iwobi come on today. No substitutions… Unfortunately Arsene just seems like he’s out of ideas now. Let’s hope we can turn it around.

I agree with most of this. The defense is poor no matter which way you look at it. I kept saying- make a sub, make a sub, make a sub! But I guess Wenger just didn’t want to interrupt the flow of the game and probably didn’t trust his bench to come on and do a job. I still thought Iwobi should have come on. Now heavy rotation for the Utd cunts. Like should I even watch? I will but with half a heart. I mean that was our best defense. Add rotation… Arrrgh I’ll just watch to see what… Read more »

Loved Lacazette tonight. Under a new manager next season I think he can be excellent

Frustrating thing is we played well and deserved the second goal, but once again let down by a stupid defensive mistake.
It was the only defending they had to do and koscielnys was found wanting again.
Feels like a defeat

we still have a chance heading into the second leg. this never was going to be an easy tie and now we just need to go out and beat them (or at least score 2). That goal they scored though for as much as people love Wenger is why the club is moving on.

but really…why in the hell is that Wenger’s fault? don’t get me wrong, looking forward to a new manager, but Kos/Mustafi and their comedy of errors? not the coach’s fault. you can’t imagine how improbable that goal is – hard to blame the manager when those individual errors are just so abysmal. Kos, KICK IT OUT OF BOUNDS. Mustafi…DON’T FALL OVER. Those two individual players bear the entire brunt of responsibility for that clownish goal, not Wenger.

If it were a 1 off then blame the players, but we have defended like this for years so it’s blindingly obvious Wenger does not know how to fix it

hey! don’t be mean and honest about Wenger! Don’t you know he was sacked? Be nice to him! Sheeesh, some people.

These two worked really hard all game its such a pity to concede yet another shit goal.

I’d we played as good as we talk then we’d be runaway winners. I highly respect Wenger and love what he’s done for us, but this is why we need a change. Fresh ideas and kick up the arse for most of these lads. Not a disastrous result but we’ve made it twice as hard now for the return leg. Fingers, legs, testicles.. cross them all. Come on Arsenal.

Both were decent and worked hard for the team but we lack directness and incisiveness and our transitions were too ponderous. Many times, Welbeck should have just driven into the box directly instead he opted for a safe pass. Granit splayed the ball out wide quick enough and both fullbacks played well but again too many touches, not enough predatory instinct. Again we paid for our profligacy in attack. Sure the defender made a mistake and we should not have allowed for an away goal but we were undone by our lack of invention up top. That said, it isn’t… Read more »

Can i wake up now? I am gutted! We didn’t deserve that luck for their goal at all!

Everyone giving out about the defending although it was Welbeck the retard that kicks the ball past two men and then dives straight away to start there move off. Fucking did it earlier in the game aswell just pass the fucking ball, no chance of getting past either of them! More blame on him then the other two dopes at the back. Saying that griezmann should have been taken clean out fuck me…

You know its the Arsenal when we Arsenal.

Srsly… I didnt said anything when every one round me got over excited about our Performance in the first 10 minutes and the sent off but deep down in my balls i knew to be caution.