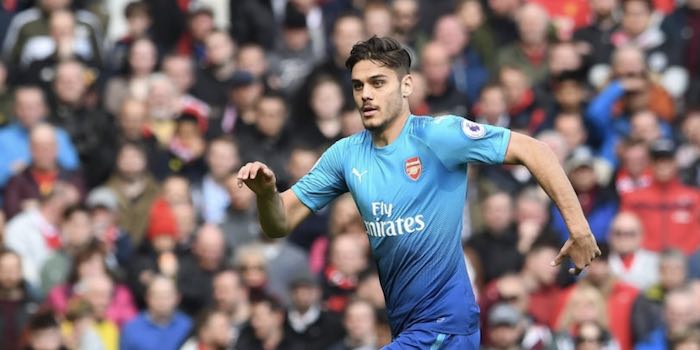 After he made his full debut at Old Trafford today, Arsene Wenger says that Konstantinos Mavropanos surprised people with the level of performance he put in, even though the Gunners went down 2-1.

The 20 year old was handed his first Arsenal start and under difficult circumstances played very well, and along with Calum Chambers he formed an interesting central defensive partnership.

He was signed for £2m from PAS Giannina in January with the idea of going straight out on loan, but the Arsenal boss decided to keep him having seen how well he performed in training.

Speaking after the game, Wenger said, “In training he has shown top quality but then you always have a question mark as long as you don’t see that under pressure in a big game.

“Until that, you don’t know. The big players do better in the competition than in training.

“They make a career, the others – we have many players at our level who do less well in competition than in training.

“That was the question mark and I think he did well. He surprised everybody by his quality today.”

It remains to be seen how much more he’ll play this season, that will, of course, be dependent on how far we go in Europe.

If we do manage to reach the Europa League final, he could well get more chances.

How did Mavropanos rate? Check out the player ratings.

I know it’s one game but is it too early to play him ahead of Mustafi week in week out?

my thoughts exactly. He’s so good in the air and positionally very disciplined – never once put his foot wrong. It’s a shame how we conceded both goals but can’t blame Mav too much for any of them. Great prospect for the future – hopefully long term replacement for Kos the boss

You mean the same Wenger who blooded Cesc, Wiltshire, ANM, Bellerin, Anelka, Cole, Vieira et al? By all means dislike a manager but please give credit where credit is due. Yesterday we had Nelson and ANM start and we had Osie-Tutu on the bench! How is that ruinous!

I don’t want to overhype him, but if he keeps his head straight and works hard he could potentially become one of the best in europe. He has that natural calmness that defines the great defenders (something that mustafi lacks)

Wengerballz
Reply to  my name is bob

You just did overhype him though

please where is Holding?

lets hope he gets some games in, when wenger goes, holding is a class player, and a future arsenal captain

Jammathon
Reply to  my name is bob

Philippe Senderos looked incredible in his first few games for us. Long way to go yet.

Oh Senderos! I remember Drogba absolutely shredding his confidence while the whole world watched in horror.

True. I thought Phil had it all.

Would like to see Mavropanos play some more before the end of the season regardless of the Europa result.

As did Holding and Chambers on debt in central defence. No dig at them either, I like them a lot but its never easy for young central defenders

Remember when Djourou had that amazing purple patch?
Heck forget him, remember when we overhyped Chambers and Holding after their first decent games?

Yes but if he gets a proper coach (defense) he may along with any other future Mislintat spots may become good. Come on take a risk sign ‘Simeone’ oh no the young Snowflakes will whine!!!! Seriously who else can take on Klopp, Pep, Poch & even Maureen?

Faisal Narrage
Reply to  my name is bob

“Now I don’t want to overhype you, kid, but if you keep saying your prayers and taking your vitamins, you could surpass Jesus.”

Maybe not Jesus, but Victor Moses for sure.

Jhendry
Reply to  my name is bob

Let us not forget the “arsenal” factor. Mustafi is a German world cup winner and looked solid prior to joining us.

If there are any positives to have come out of this season, it will have been the fact that we’ve blooded all these young guns in competitive games- playing in big stadiums with all the pressure to perform against the ‘big boys’ will only aid their development. So far none of the players that have debuted this season have shown that won’t be able to make it at the highest level.

Excited to see what this new generation can bring to the team in the years to come!

Aubameyang, Mkhitaryan and Mavrapanos (I know it’s very, very early days) all look decent. I think today was quite a good day for Mislintat.

Mislintat may, quite naturally, have an unconscious bias for players whose names are difficult to spell.

N8Gooner
Reply to  A Different George

In that case can he please bring Wojciech Szczęsny back?

I believe he also brought in a certain Greek center back Papastathopoulos to Dortmund. He turned out decent. And he had to use Sokratis on his shirt to help out the Kit men.

More people getting carried away. Remember Holding? If anything Mavropanos and Holding should be vying for a start as alternate to Koscielny/Mustafi. The other should go out on a strong loan Whether we keep faith in Chambers is also another issue. Mustafi like it or not is still one of our stronger Cbacks. What we may need is someone to come in from market like De Vrij or a Koulibaly who is more ready made (if we can afford them), ostensibly to replace the aging Koscielny (who can then take a retiring role ala Per, or if there is a… Read more »

Loaning players to give them playing time all too often doesn’t work. They spend their time on the bench and get used as back up. Look at Emiliano Martínez goes to Getafe for experience and gets 3 games .Just as we are looking at young keepers to replace our two aging ones he gets a wasted year of development.

I was hoping when fergie gave the boss that box at the start that it was going to be roy keans head inside. So impressed with the greek boy first signing by sven?

The box was too small for Keane’s head!

Maybe just his beard and small mind then.

Box will be too big for his brains, will damage even with Amazon level packaging,

I’ll copy what I posted in the player ratings thread below. What I like about Konstantinos is that, though he’s young and still very raw, his raw attributes is what this team has missed for so long. A big, strong, athletically dominant CB along with a sweeper type. Gosh I’ve been so used to seeing modern Wenger types (Gallas, Verm, Kos, Gabriel, Chambers) that I’ve kinda forgotten what it’s like to have a physically imposing CB. Now just to see what our midfield looks like with an athletic and powerful box to box CM. Maybe give Josh Da Silva a… Read more »

Yeah, I remember Gallas and Vermalen, but what was the name of that German fellow we had–you know the guy who was our captain and won the FA Cup for us? It was so long ago, I just can’t recall him.

Greg
Reply to  A Different George

The slow guy who ducked when heading the ball?

If you think because Per was tall, he’s athletic, then I’ve got news to tell you. Per was tall, but athletic he was not (a component of athleticism is explosiveness and speed). In fact, due to a combination of his own game IQ, the fact that Per even worked so well with Kos despite still being physical limited, but was close enough to the “powerful” template is further evidence that we should’ve always had a Campbell type to go with Kos (aka Toure type). Oh, and let it be known that Wenger didn’t even want Per, just as he overlooked… Read more »

i still feel Wenger threw the Man U game 8-2 to get the funds for a trolley dash. I remember him taking off coquelin, who was about the only one who was able to keep possession, and wondering.

I think Mavropanos will do well because he fills a role in the squad where we don’t have many options. Koscielny, Mustafi and Holding are all front footed defenders who like to attack the ball, and i think they would all look better next to an aerially dominant covering centre back (remember how crap Koscielny looked next to Vermaelen vs when Mertesacker joined) and I am hopeful that Mavropanos can provide that next season.

Word is Brendan Rogers wants to win 10 League titles with Celtic…so we are safe on that front!

Are we?
That league is so one-sided, he could probably win 10 by this summer.

One swallow does not a summer make. Be realistic. Give him an extended run and let him play against top predators and then we can really know his quality.
Too many asteroids have been brightening up the sky only to fall down to earth with a bang.

It takes an environment that is willing to risk a bit to give a promising young player those opportunities and time. Will the fans, those fickle fans, allow the opportunity to take those risks for the amount of time necessary? Are we a team that does that, bloods and develops young players or are we a team that demands winning trophies or are we a team that demands winning trophies…but doesn’t win them? What kind of manager do we have? What kind of ownership do we really have? Who In the fudge are we now….we do not know the answer… Read more »

Should have thrown this lad in earlier in the season. Koscielny & Mustafi were both awful all season. Wonder why he didn’t give the lad the chance earlier

Unlike most of us.

So he killed the whole team instead.

I thought I was being clever with this post…but reading the comments before posting I’m not. Seriously if I was picking the team for Thursday he’d be first choice as centre back. Who’d be the other one would be the next decision ??

I am hopeful we get a manager in who really values defensive organisation and nurtures young defenders as I remember both Chambers and Holding looked like confident, well-drilled centre-halves when they joined.

It’s not to have a dig at Wenger–he is a manager who naturally favours attackers –but I can’t help but feel that we train the good habits out of defenders at Arsenal these days. Mavropanos could really benefit from a manager who gives higher priority to defence and perhaps, doesn’t leave them exposed behind an unbalanced midfield.

He is the real deal. With good coaching, he’d definitely come out great.