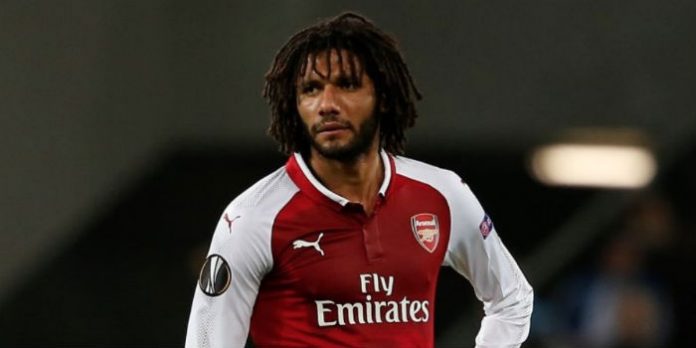 The Egpyt international landed heavily after challenging for the ball in the closing stages of the first half and had to be stretchered from the pitch.

“It’s an ankle problem that is very painful,” said Arsene Wenger after the game.

“Overall I believe that we have to wait until the X-ray to know a little more about it. But Thursday will be too soon for him.”

Elneny looked visibly distressed as he was taken down the tunnel. At this time of the season and with a World Cup on the horizon, ligament damage for the player would be heartbreaking.

The boss also had updates on the fitness of Jack Wilshere, Mesut Ozil and Henrikh Mkhitaryan ahead of Thursday’s crunch clash at the Emirates.

“Jack had a training session today and he looked positive so he has a good chance to be available for Thursday,” added Wenger.

“Ozil was sickness [flu] so I cannot tell you much more about that. We will have to see how he recovers tomorrow [Monday].

“But Mkhitaryan won’t be available on Thursday.”

The prospect of not having Ozil, Wilshere and Elneny in the squad certainly poses a headache ahead of our biggest game of the season to date. Here’s hoping for some positive news in the coming days.

Arteta not ruling out Mkhitaryan return

Mkhitaryan: Arsenal did not pleasure me

I hope Elneny gets over the injury to get to the world cup. Looks like its just the ankle but certainly looked bothered on the pitch. May need Jack for Thursday. His competitiveness could be the asset but he needs to be 100% fit. Hope the rest has done him good because he was struggling over recent games. Ozil will be key to our success Thursday though. Its 3 finals we need him to show his class. Athletico are a solid defensive unit and we will need the German’s creativity to take them apart. Also Mhkitaryan who hopefully will be… Read more »

I feel very bad for Elneny and hope he get recover quickly in time for our end of season and WC. He deserves to play.

Feeling pretty good about Mesut and Jack being available for Thursday.

I feel so bad for Elnenny, judging from his reaction it looked like he knew it was a long-term injury that may mean he doesn’t make it to the World Cup which would be a huge blow for him. As for arsenal vs atletico, injuries open the door for other players that wouldn’t have been given the chance and I think niles would be the perfect person to replace him. His pace and defensive ability was really helpful today, especially with our full backs always overlapping and leaving the CB’s exposed. It was this kind of game a couple of… Read more »

I agree, apart from a couple of moments, AMN looked really good today, focused and willing, didn’t hide and drove forward when he could.

Mhki will be a big loss though.. He’s been great in Europe especially.

Also i heard somewhere that Elneny’s reaction was down to his emotions from having the crowd chant his name and give him a standing ovation, rather than the injury.. Hopefully whoever i heard that from was right! Sorry, shit memory..

Did you actually watch Niles in midfield today? Totally not ready. That’s his position but he’s been out of sorts there the few times he’s played ther . Looked very comfortable at left back ironically.

And I keep it mind he’s only young and will get better but maybe, just maybe Arsene knows.

He looked really good and has shown in previous games he can play an important part this season. Can’t understand why you are rubbishing him

Ozil seems to get the flu quite a lot! Sickly child

Thank you for that explanation

Perhaps we should try playing with robots. That could be fun.

Fuck. Someone should tell the next manager. Clearly Wenger was oblivious to this little gem.

Hm, many thought some vitamins would come with the new contract. Maybe he was actually sick.

Off topic: Did anybody catch our Handsome French bloke’s goal against southampton today? It was just effing brilliant, for a second there I thought I was looking at Messi. Man do I miss the guy!

Not ‘our’ handsome french bloke anymore.

He still is. He’s just playing for that other shower.

He will always be our HFB, I miss him too.

Our French bloke scored two today.
I miss the old bloke too, but accept he had to go if we were to sign Auba.

It’s a great goal. He leaves defenders falling over themselves . Courtesy of the bbc https://www.bbc.co.uk/sport/football/43772431

I suspect he has at least one big game against Atletico in him. He looked super confident when he came on today

Honest truth and nothing but

You dont know what you have until you lose it. I think a lot of Arsenal fans really secretly want him to stay maybe might self included.

Greg
Reply to  Honest truth and nothing but

I think its called hay fever lol not flu. I just got it for the first year and gosh its awful. I have to say though that shot in the game of jack hanging over the edge with his shirt undone was pure gold haha. I feel like everyone had that mate at school who was a jack the lad always in detention and out and about but on the pitch for the school team was magic.

AMN is so so so smooth. He literally plays in his own time continuum.

Also he made me think maybe the key to xhaka is not to find a player that let’s him sit well, maybe he needs a player that can set him free.

I know it’s a big game, but I’d like to see AMN in the middle on Thursday.be good to find out if he’s a big game player?

For the love of God get Ozil some theraflu and get I’m out on the field Thursday. We can’t rely on Iwobi for a game this big.

Agree with Tommy Gunner, Ozil gets flu every 3-4 months. Has anybody at the Arsenal thought of booking him for a flu jab at local Boots? Add in a meal deal and he will be eye poppingly healthy.

No! You shouldn’t have told us who is the one with the flu. You should have let us guess