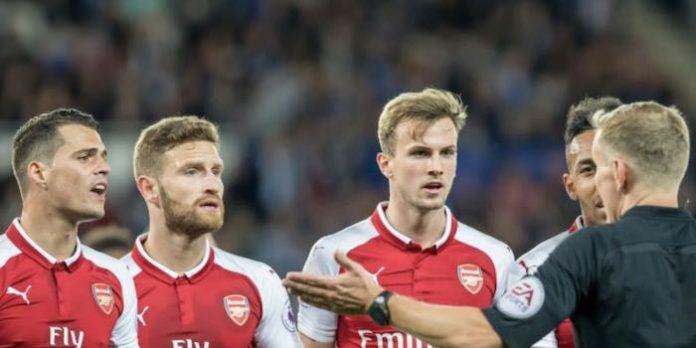 Arsenal’s soon to be named new manager, Unai Emery, has suffered a crushing blow before his job even begins as his already limited transfer funds took a big hit after the club was fined a whopping £20,000 by the FA.

The charges came from the 3-1 defeat to Leicester in the penultimate game of the season as players protested a decision by referee Bob Cataracts awarded the home side a penalty.

“Ah come on,” exclaimed another.

“This is a travesty of justice the likes of which the sporting world has never seen before. I hope you forever have an itch upon your testicles,” an unnamed player called Shkodran blurted.

It’s believed that £20,000 was all we needed to get a deal over the line for ‘Excellent Player’, but now that it’s not there we’ll have to sign ‘Average Player’, or ‘No Player At All’.

Might as well write next season off before it’s even begun.

FA hit Operations Manager with fine for half time bust-up

Scarily every word could be true

Nice,kick it where it hurts!we are penny pinching in the transfer market as it is :/

Is it any wonder the FA is against Video Assistants? They’d lose a major revenue stream.

20,000 sounds like a lot; it’s barely half a week for most average EPL salaries.

This was just the FA doing what they do best, blowing trumpets over nickels and dimes.

Blogs. When are we going to address the elephant in the room? (Unless we’ve addressed it elsewhere and I missed it). When are we going to see a post which assures us that the like/dislike buttons are missing only for technical reasons (and they’ll be back as soon as you get it fixed) and not because you think we’re unworthy judges of what is right/wrong, funny/not-funny, Aubameyang-like/Bendtner-like, and so on?!

Those buttons are half the reason why I love this site so much. 🙁

I love this site not just because of an infantile tendency to punch a like or dislike button. The articles in themselves are enough to visit this awesome site Bro.

Yo. I love this site too brooo. I said those buttons are only *half* the reason. The other half is all blogs and its awesome booty. 😉

Yeah it sucks without the thumb buttons

God i love this blog

Well, lets at least go for “average player” then.
He might turn out to be better than we expect!

With all due respects, Mustafi isn’t our worse defender. HOlding, Mavropanos, Chambers have all made silly mistakes as well. Their only excuse is youth. Fair enough they have a learning curve but are we to rely on them if we should sell Mustafi and get another? IMO Mustafi has made far more critical blocks and clearances than many care to remember (along with his faults) But people imagine more faults than need be to hold any objective and sanguine views. IF anything the defense needs sorting out – 1) Koscielny is tired legs and injury prone. We may find it… Read more »

How on earth will cataract be able to see well

I totally agree with you.

Bob Cataracts is so dishonest to his federation it’s untrue

Be careful of what u are saying..u might get touchline ban for that

Aw mann…you made me miss arsene all over again 🙁

He has a bin for a heart

With all due respects, entertaining as it was as always, learnt nothing from your podcast. Amy Lawrence Auclair I much respect but even they are prone to speculate and add invention to things they don’t know. Much of the stuff is reactionary although have to say at least Amy Lawrence to her credit was suprious about the whole Arteta rumours from the get go where Auclair tried to invent some sort of fictitious US structure of management to go along with it. Do we have better experts and people ITK we can tap in future? OTOH well done for organising… Read more »

Get your own blog dude, it’s getting to be a bit much.

…to the Hookah lounge.

I think as far as transfer budget is concern, we need to sell players. Campbell, Asano, maybe less the case Perez will have to be moved on. But also Elneny IMO. We need better option in midfield and Granit should be minimal quality standard not the Egyptian. I would even contemplate selling on Welbeck but his strength and power may be a useful plan B for at least the next season. In defense, I’m not against a Mustafi sale but I think he is one of our more experience players there and none of the young pretenders have done much… Read more »

TL;DR
Was having too much fun with the fun stuff.

This is why we need the thumbs button.

A P
Reply to  santori

Why do I think all these analyses are going to lead to Mahrez (again)?

Fucking hell Santori, even by your standards.

Boo to the fine but yay to the players for standing up for themselves and calling the ref a joke!!!

It was well worth it.

The club should add a bonus structure to Rob’s terms so he can afford to cover these fines.

Maybe the £20k is for cream for the lifelong itch the ref has to live with due to the curse of the nameless Shkodran!

Well there goes our transfer Budget