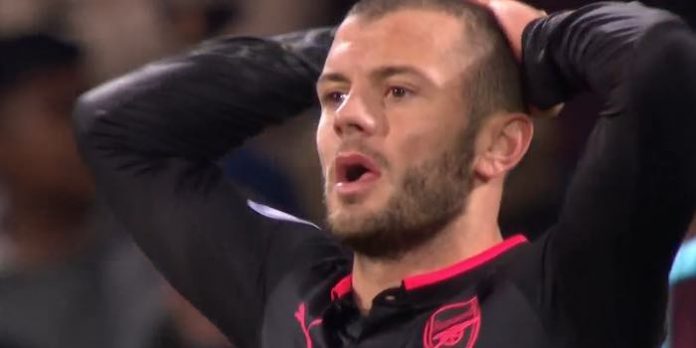 Despite having a generally injury free season, Jack Wilshere has not been included in England’s squad for the World Cup in Russia this summer.

The midfielder made 38 appearances in all competitions this season, but started just 12 Premier League games.

He was called up to the squad for friendlies in March but injury meant he missed both game and with that a chance to impress England boss Gareth Southgate.

Wilshere’s future is still unclear, a new contract remains unsigned despite the fact Arsenal have reportedly come back with improved terms.

The 26 year old went on loan to Bournemouth the season before last having been left out of the England squad, and he is always keen to play for his country, so it remains to be seen if his desire to play international football has an effect on his decision.

He is unlikely to be anything more than a squad player at Arsenal next season, so if he feels his England chances are improved by a move elsewhere, that may well have an impact on what he decides to do.

I’m Scottish, so ultimately I don’t care but surely he’s the kind of player that makes England much better not to be a cliche, but Jack gives them another dimension

The BBC had a good article yesterday, called “England World Cup squad: Who goes to Russia? Statistics and numbers” for those who want to look it up, that looked at chances created, pass completion etc. and Jack had the best pass completion. In every team you need a metronome, someone who can take the ball and be able to pass or run with it to keep things ticking over. I just don’t see who else England have in the ranks who can do that. I feel sorry for him. BUT, if it means he gets the summer off, he doesn’t… Read more »

It’s a big mistake in my opinion. I don’t think Jack right now is as good as we’d hoped he’d be, but he’s still easily the best passer England have.

I’m English, so ultimately I don’t care but surely he’s the kind of player that makes England much better not to be a cliche, but Jack gives them another dimension.

I’ve been slated for this opinion plenty in the past but…. Wilshere’s done absolutely nothing to warrant a new deal.
Let him go, and give Niles a run.

Cazorla’s my favourite Arsenal player since 2012, but let him go as well.

Really gutted for him. He could offer so much to that England team, full of utter cloggers.
Given there will be no Arsenal players in the squad I really don’t care as much how England do at the World Cup. It’ll just be really Spursy… urgh.

Apparently, Welbeck would be there.
Fucking blasphemy that anyone in their right mind would pick Delph over Wilshere.

One’s been a consistent starter for the league champions, the other’s been a squad player for the 6th place team.

Well, one has more technical ability than the entire English midfield combined, and one’s a makeshift left back.

Not a city fan but an arsenal and England fan ….no contest between taking a player who has played a key part in his team losing the least games , winning the he most games , scoring the most goals and getting a record points total and not selecting one who has been an erratic performer for his team despite so called technical ability and has not done what you would expect a supposedly talented midfielder to do for his team

How about fuck off

Delph has been taken as WB cover also.

really? you don’t think Southgate takes at least 2 of Young, Bertrand, and Rose? how many lwb’s does the england squad need???

typical English mentality, stuck in the dark ages: filling your squad with utter cloggers like Henderson and Dier, then being surprised when you get knocked out the first time you play a half decent team (or Iceland).

That’s why England will take the South Gate at this World cup.

Gotta feel for him, he must be absolutely gutted at the news

Wilshere and all Arsenal fans should feel happy that Wellbeck his team mate has made the squad … a hard worker and the second highest goal scorer among the squad for England I think … . Good for Wellbeck who has been consistently criticised by a few self proclaimed pundits on this site

Sad for him as he’s put in some decent displays this season and one of the few in our team with a bit of fire left in his belly. This is probably better for us and him because a crocked Wilshere coming back from the WC is no use to anyone. Good summers rest and back for August.

Bit surprised because he could probably do a job off the bench for England. It’s not like England are doing anything at the World Cup and it might do his body good to rest anyway…

Good on Wilshere, take a summer off, sign the damn ting, and do your thing for Arsenal!

Better for Jack really for next season the break will do him good and I would like to see him sign a new deal and play regularly next season. If he moves then I hope it’s abroad as we rarely see English players learning the game in other countries. It might make him a better player. Gifted he certainly is.

Is he seriously implying Shelvey/Livermore would get in the squad ahead of Jack?

Maybe Southgate sees Ox as a utility player and someone who can also do Wilshere’s job to break through the lines from central midfield. Also he is on better form than Wilshere. I think the thought of Wilshere playing quarter back, Pirlo style is gone now. His poor defensive awareness for Arsenal has cost a few goals this season. Shame as he has talent and just was unfortunate with the injuries at key times. Especially this season. Next world cup he will be 30, so the next contract will hopefully see him up to the next world cup selection. I… Read more »

He will decide on his contract extension soon, as he won’t be able to put himself in the world cup shop window anymore.

If Welbz doesnt make the cut and England win the WC we wont hear the end of it.
“first time England have 0 arsenal players in xx years and we go and win the WC”

still, thats in the strange world where an England team full of s***s players, who are already renowned bottlers actually don’t bottle it.

Well we don’t really have to worry about that scenario playing out.

Eh, I hope the message he takes out of this is “I need to play regularly next season and in the future!”, and decides he wants to try his luck at getting a starter role somewhere else. We’d then dodge the bullet of having to pay 100K+ per week to a squad player. Let him try and revive his career elsewhere. If he does, I doubt it will be in a way that could have helped Arsenal anyhow. If he doesn’t (and I don’t think he will), then his failures won’t be our problem anymore. And we won’t be paying… Read more »

I needed reminding of what England’s midfield options are. Bloody hell, it’s a weak bunch of players. I genuinely don’t understand the thinking behind leaving out Wilshere in light of the alternatives. What happened to England?

They became mediocre footy players while other nations improved.

Because he is ineffective

Feel sorry for Jack. Perhaps his injury records hindered his call up. When you think of the irony that he went to Bournemouth after being left out of the England squad yet having played his way back into the team and yet, overlooked again. It’s got to hurt a lot.

The world cup will be over for England before they have time to unpack their suitcases.
So why be bothered?

Can’t take lallana if it’s about fitness or injury worries.henderson and dier midfield two is the nost Sunday league ever line up for England at a tournament. Where will England create from?

Kyle Walker from the looks of it. That and Alli and Cane tipping over for pens. A bad case of the Sp*rsies indeed.

Very surprising considering Ox’s injury and England’s general dearth of quality midfielders. Can only think Southgate has decided to throw-in crowd pleasing curveballs like Ruben Loftus-Cheek or Jonjo Shelvey. Feel really bad for Jack in all this, been very hard done by.

This is ludicrous. The England squad is too one dimensional. Full of people who can run quick. Need someone who can link the play well and start attacks quick. Lallana is good but how in the hell is he fit enough. I was looking forward to the world cup too. I guess I’m supporting Nigeria now.

Lallana has also been left off. Henderson, Dier, Loftus-Cheek, Lingard, Alli, and Delph are the midfielders. Compare this, for example, to Germany who can choose their midfield from, among others, Draxler, Goretzka, Khedira, Kroos, Gundogan, and Reus. And, oh yeah, Ozil. (Not better if you do France, Spain, or Belgium either.)

I will enjoy the world cup but I don’t care about England. Having Jack fit and rested when the season starts means more to me than him risking himself in that tournament. Plus, England won’t get far anyway.

Every Arsenal spared the world cup is a bonus to me.

Jack may well have had a rubbish world cup, but then again he could also have been great. Every other English CM is almost guaranteed to be turd.

He could have done more in an Arsenal shirt this yr and I felt he went through the motions a bit at times. It’s a bit harsh bec his injuries have taken a yard of pace which is so crucial to the way he plays. Missed the cut but assuming he signs a contract, it’s only good news. Let’s keep him fit, Arsenal before England IMO

sorry for jack, but englands loss is arsenals gain, he will be fit and healthy for the start of the new season

Hopefully at another club.

Where he’ll be pulling in a 100K+ per week wage packet to be inconsistent and/or underperform.

If he’s not injured within three months again, that is.

Why so pessimistic Bloggs?