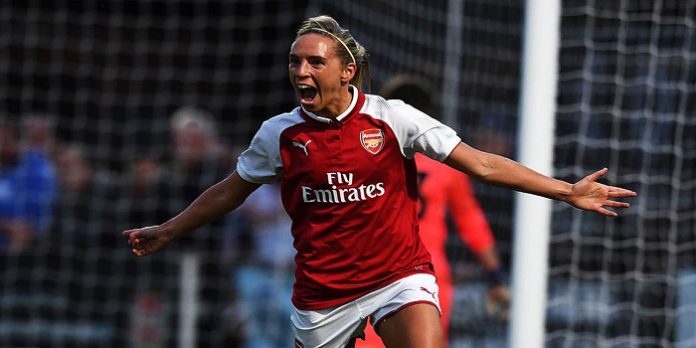 The 25 year-old is also vice-captain of England. Nobbs has established herself as a crucial part of the Gunners squad, starting every game that she is available for. She is known for her boundless energy in a box-to-box role, the quality of her short and long passing and her ability to score from range.

Jordan has established herself as one of the world’s outstanding midfielders and she joins Leah Williamson and Emma Mitchell in committing her future to the club during 2018. Nobbs told Arsenal.com, “It’s always been my dream club and the fact that I get to spend some more years here is the best feeling.

“It’s been a long journey and when I signed at the age of 17, I wanted to improve myself as a player and I wanted that challenge. I came in as a nobody in front of players like Katie Chapman, Kim Little and Jayne Ludlow.

“Obviously I had to work hard to get my shirt but it was the best thing for me and the biggest challenge. It’s definitely got me to where I am today and I’m very grateful for everything I’ve had at this club. It’s definitely helped me with playing for England as well.

“To be an England international and a regular at Arsenal takes a lot of hard work but everybody around me has been unbelievable. The club has been unbelievable and hopefully there’s still more to come from me. I just believe that I’ve progressed as a player here and that’s the main thing. I want to be one of the best midfielders around.”

You can read her exclusive interview with Arseblog News from just three weeks ago here.

That is great news! Go Jordan!

Surely the first name on the team sheet every match with the way she plays.

Arsenal is lucky to have you too, Jordan!