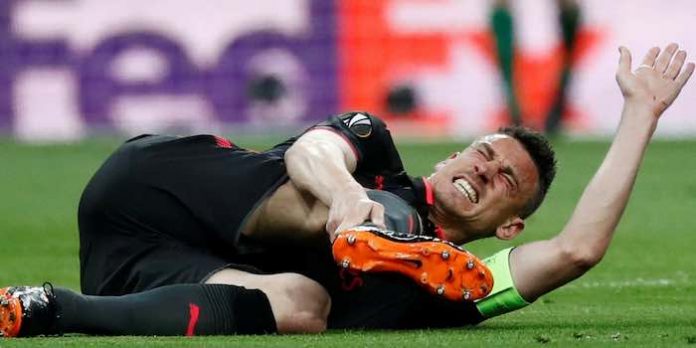 From the stands of the Wanda Metropolitano on May 3rd, I noticed Laurent Koscielny lying on the ground in agony, and immediately thought Diego Costa had done him off the ball.

It transpired that the Spanish international had nothing to do with it, and understood the seriousness of the injury very quickly, but the Arsenal captain that night initially thought it was a challenge from the Atletico Madrid striker that had done the damage.

Speaking to the french Football Federation website, Koscielny revealed what went through his mind as his Achilles snapped.

“When I fell, I thought it was because Costa had tackled me,” he said.

“But not at all. I looked around me and I was all alone. I immediately knew that my tendon had gone. The pain wasn’t normal, I felt a terrible rupture. And I heard a huge crack.

“Costa, who wasn’t far from me, heard it too. My first reaction was to say, ‘It’s done – my tendon has snapped.’

“I was screaming on the pitch. I remember hitting my hand on the ground several times. It was an atrocious pain.

“At that exact moment, I knew that it would be at least six months before I could play again.”

The injury means Koscielny won’t play again until December at the earliest, and also that he’ll miss the World Cup this summer with France.

L’Equipe reported this week how, when players returned from lunch at Clairefontaine, they each found a letter to them from the 32 year old wishing them good luck in Russia and asking them to pull together for the sake of the team.

He’s definitely one of the good guys.

Kos has been our stand-out defender in recent years. Given the attack-minded structure he’s been working in I think he’s really been one of the best in Europe.

His timing and aggression defending on the front foot are obviously, high-risk/high-reward, and to his credit he’s really got the best out of it.

He’s going to take some replacing.

Well 33-year old can hardly feature in the long the long term plans regardless of circumstances. But, provided he recovers, the club should absolutely keep him for two, perhaps three years using his leadership and experience in the transition period.

Three years is long term in football these days…

What leadership? His lack of any kind of command of other players is one of his weakest attributes.

Big fan of his as an individual but he’s honestly the limpest full-time captain/vice captain I can remember in 20 years of following the club.

Why cant i downvote you?

its a little concerning that our best defender is 32 years old , that just had a potential career threatening injury. injuries like this takes a lot from a player, even if he come back well , he will still feel the effects of it for years to come. the others defenders we have , the less said about mustafi the better , and then we have couple of talented but very young players. buying a top class defender is a must. it should’ve been done years ago before we were in this position, but hoping emery would solve this… Read more »

I think his career is mostly over at Arsenal now to be fair. Errors having been creeping into his game (probably due to him playing through injury and pain) and he is losing his speed. I love Kos but I would be surprised if Emery really includes him in his long term plans at all. Such a shame for him to miss the world cup, would he have been a starter on that France squad anyway I wonder?

I think we should have him around a couple of more years, at least as backup and as an example for younger players.

Yes he would be starting for France, he has been for the past few years.

That’s a real shame for him then. Poor Kos, bad timing, like the Ox I guess, but one I care about and one i don’t 🙂

Kozza da Boss. Class all the way. What a shame missing the WC and the rest.wishing you the fastest recovery, ever..

Why does the most terrible thing always happen to the good guys?

Because they are the ones who gives 110% on the pitch!

Also went on to say:

“You have to have put it into perspective. Yes, I’m missing a World Cup with a good bunch of mates and great players. But there’s worse in life. I’m in good health and my family are too.”

Goonerink
Reply to  Maxin In The Shade

In good health.. Minus the career ending injury

Get well soon Lolo. Have a good rehab and come back fit.

I respect what he has done for arsenal bit I can’t remember any defender being involved in as many cup exits arsenal have faced. Arsenal vs Birmingham Carling cup, red card against Bayern munchen etc. It was even his error that gifted Griezman an equalizer and his injury in the second leg effectively killed the tie for us and our slim Europa league dream. I wish him the best but let’s face it, his time at arsenal is up.

You’re right but on the other hand, he grew from a French Ligue 2 player into one of Europe’s best defenders with us. A lot of those problems came because he was constantly exposed in Wenger’s system with no real DM or midfield general to protect him.

In his peak years he should have won at least two Premier League titles, especially in 2015. What happened that year was a real disaster for guys like him and Cazorla.

Probably done at Arsenal, sadly. A crappy way to go out like Santi.

We’ll miss Kos the Boss! Along with Giroud, one of Wenger’s best signings of the last 10 years.

Giroud was a hasty decision to accommodate Mslintat’s plans unchecked.

I feel by January, Wenger was already a little on auto mode.

Even if we brought in Aubameyang, we should have tried to agree personal terms and then made a deal with Dortmund only to take him in the summer which would have also helped them.

That would have kept Giroud till season’s end and allowed us an alternate to Lacazette in the critical europa.

Poor decision making pandering to too much power at that point in the hands of Mslintat.

Loves the club, represents all that a Gunner is.
One of my faves.

Repairing the Achilles tendon is an almost routine procedure today. Much less ‘iffy’ than just 10 years ago. 20 years ago he could never think of playing top-flight again.

Rehab, and his effort toward it– will determine the level he can reach once again.

Worth noting whilst some like to criticise Mustafi that Koscielny’s first season was littered with red cards, penalties conceded and own goals.

It all Arsenals fault. Wenger the medical team or both. I mean Kos’s chronic achilles has been well documented for at least 2 years now and up until Dirty Diego Costa maimed him (he was the closest man to him so that’s more than enough evidence for me) he was our undisputed No1 CB practically running him into the ground.

What i’m trying to say is knowing his condition we should have either brought a top notch CB or at least rotated him with Holding/ Chambers more frequently. Especially seeing as he’s soon 33

Wenger and medical team out?

If he doesn’t play Koscielny results could have been even worse.

Holding did not materialise as many imagined he would. Mavropanos is still green and needs time. Chambers had issues and mistakes as well but only got better at season’s close.

He has been over played considering age and wear and tear issues. Principally, none of the other candidates some wish to think better in Chambers, Holding or Mavropanos have come close to matching Koscielny for pairing with Mustafi last season. Toward the end of the campaign, Chambers was showing better promise. Mavropanos is too early to tell. Holding is still work in progress, both younger defenders need to show sustain ability. This is the problem. In context, Mustafi has been actually massive for us even if he has made some mistakes (As has Nacho and Koscielny this season) Mustafi has… Read more »

Feel sorry for Koscielny. I mentioned start of season that he would be “on his last legs”. He has been depended upon a lot but wear and tear issues were only going to exacerbate. We do ourselves no good relying on him next season (like what I mentioned with Santi some seasons past) Meanwhile it would be foolish to sell Mustafi. Like it or not, with all his faults, he is still one of our best Cbacks. All this praise lavish on Mavropanos but he has also made mistakes that many chose conveniently to ignore. It was the same with… Read more »

Miserable injury, miserable timing. Wish him a safe recovery. Costa’s behaviour actually belied his reputation for being a bastard.