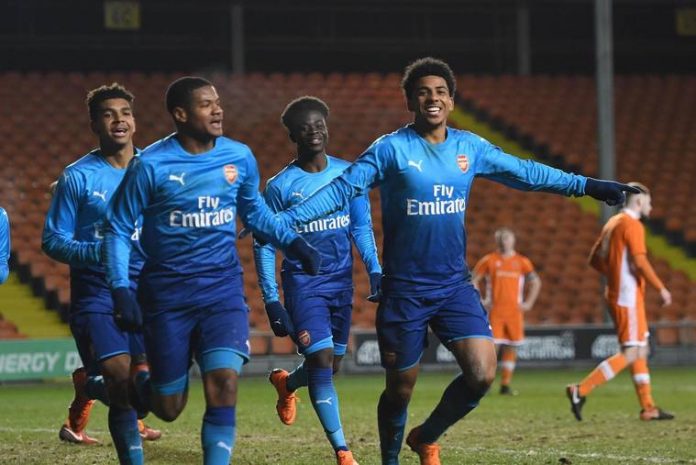 England U17s crashed out of the European Championship last night as they were beaten on penalties by Holland in the semi-finals, but the tournament was still a valuable experience for the Arsenal youngsters representing the Three Lions.

Winger Xavier Amaechi, who was suspended for the meeting with the Dutch, was one of the standout players of the competition as he impressed with his pace and trickery, while schoolboy Bukayo Saka, who can play as a left-back or a winger, also made an impact.

Forwards Tyreece John-Jules and Folarin Balogun, meanwhile, weren’t regulars in the side but still received some playing time, although Trae Coyle was an unused substitute for each of England’s matches.

Right-back Vontae Daley-Campbell (pictured, second left), however, featured prominently and enhanced his reputation as he produced some impressive displays.

Daley-Campbell’s key asset is certainly his strength, with the 17-year-old capable of barging many of his opponents off the ball with ease.

The prospect never backs out of a challenge and is certainly no stranger to a yellow card as he sometimes oversteps the mark.

That said, it is somewhat refreshing to see a youngster who is fully committed and ready to do his utmost to fight for every single ball, qualities which should impress Arsenal’s new U23 coach if, as expected, an appointment is made in that department to replace Steve Gatting and Carl Laraman, who are likely to depart.

Daley-Campbell has already broken into Arsenal’s U23 squad and made his debut away to Liverpool, so he will be seeking to establish himself as a regular in the side next campaign.

Jordi Osei-Tutu, who was one of the outstanding performers for the second-string this season, is currently ahead of him in the pecking order and is older, but there is a possibility that the former Reading defender could go on loan or step up to the first-team at some point next season, which would create a vacancy that Daley-Campbell could fill.

Daley-Campbell has already demonstrated that he can excel at U18 level and now he will seek to prove his credentials on a bigger stage.

Like many modern full-backs, the youngster poses a significant threat going forwards – he frequently bursts into the opposing penalty area and delivers dangerous crosses.

However, he is still rather vulnerable defensively at times, with his positioning somewhat questionable.

Osei-Tutu found himself in a similar position this time last year and has gone on to improve his defensive deficiencies, with it being hoped that Daley-Campbell will now follow suit.

Beast of a player this boy.

Jeorge, Should we be looking to sign an experienced right back like Cedric from Southampton or is Osei Tutu good enough as a Premier league back-up?