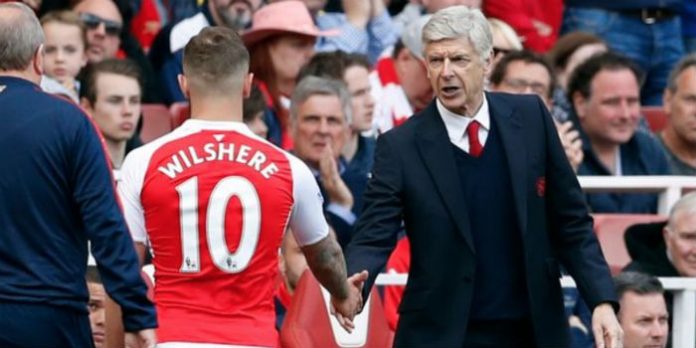 Arsene Wenger says he’s no longer involved in Jack Wilshere’s contract negotiations but he maintains that he’s optimistic that the England international will sign a new deal at the Emirates.

There was no sign of a goodbye from Wilshere when he was substituted in Sunday’s 5-0 win over Burnley, a match that might have been his last in front of the Arsenal fans if he doesn’t agree new terms.

It’s understood that earlier in the year Wenger sanctioned a highly incentivised deal which would see the 26-year-old earn less in terms of his basic salary but with the potential to increase his overall take-home pay through appearances and achievements.

“The latest conversation I had with Jack looks positive for the club,” he said in his penultimate Premier League press conference.

“I’m not involved in the negotiations anymore. I’m still in touch with Jack and if he wants my advice I give it to him.

“I’m convinced, as always, his future is here. It was always my wish and I think it will happen, yes.”

Wenger also touched on his relationship with Wilshere, who recently described the Frenchman as a father figure to so many of the players at London Colney.

“You are here to guide the players to get to their best,” said Wenger.

“Some of the players like Jack Wilshere I have known since he was basically 15 years old. Of course, that builds a special relationship because you see them going from kids to men.

“You help them to go through some very difficult situations. Jack Wilshere has gone through being a superstar to suddenly being out for a year. At that age it’s very difficult so they need some help with that.”

The last quotes we have from Jack on the subject, he too sounded like he was coming around to the idea of staying put in N5.

“To be honest with you, I haven’t really thought about [moving somewhere else],” he told Sky Sports Soccer Saturday.

“I have said before that this is where I want to be and I have not really had much time to think about moving clubs.”

We want you to stay, a career dip hopefully followed by a rise for the next few years.

Even if we do sign the ‘elusive’ 6ft 5in, commanding, Vieira-esque central DM (chance would be a fine thing!) we’re all craving and that pushes Jack more to the peripheries, then just having a man who’s so ingrained with Arsenal DNA can only be a good thing (“What do you think of Tottenham?”).

Now he’s had a decent run of games, he’s starting to show signs of ‘pre-injury’ Jack, so just get on with it and sign him up I.R.S!

An imposing and tactically astute DM would be awesome, allow us to play Bielsa type football, much like Pep, Klopp or Poch. Maximising our attack whilst minimising our defence.

Only problem is that everyone is looking for a player like that, and history has shown we aren’t willing to pay market rates.

If the squad was stronger, it would have allowed us to fly under the radar with a young potential and allow them to make mistakes here and there.

However we have been running bare bones for quite a few years now.

A Different George
Reply to  Ozenal

I don’t know any player that really matches that description; Pogba comes closest and we know what he cost. It turns out that Patrick was pretty unusual though I wish we had a Tony Kroos or a Khedira or James Rodriguez.

very different situation in that Ozil while he wouldn’t have been able to go to a Madrid, PSG etc. due to playing style, he would have had some very attractive offers. Jack appears to be choosing between Everton, Wolves & the possibility of being a squad player post Wenger at Arsenal.

rubbish, the only reason he stayed at arsenal, was because no other club was willing to pay the same amount of money wenger was offering him, so now we haven’t got ozil like all them fans said when he re signed for us, we are stuck with him, no one else will have him

A P
Reply to  afan

The club wouldn’t have offered a contract if they didn’t want to be stuck with Ozil.
You fetish for Wilshere is making you think out of your ass again.

Let’s be honest, Jack’s options are severely limited. He doesn’t seem to want to move to Italy or Spain (where I think the could thrive), none of other the top 6 Premier League sides appear to be interested and the majority of mid/lower table sides can’t afford his wages nor will give him an platform to get into the England team that he clearly craves. Which leaves him with Everton & Wolves, who have shown interest, and perhaps West Ham & Leicester. Hardly mouthwatering. 10 months ago Everton & West Ham might have been attractive, but seeing how Walcott hasn’t… Read more »

Don’t forget that for the first time in many years wilshere had a full season withou an injury and played many games which will only do good for hin i really think this season staying fit and playing will ctapult him to have a great season next one.

apart from ramsey, he has been our best player

Not sure signing Jack makes sense. Did he make an impact against Atletico? He’s played a lot the last two years. Has he Made any difference against top sides? Hardly think Jack has shown any signs of significantly improving Arsenal’s central midfield. Give AMN more chances and make a signing. Let Jack go.

Honestly, he didn´t set the world alight in the EL group stage games as well – and those surely were not top sides. Jack defo proved his fitness this year and also had some good games, but he´s way too far from the starting XI if we seriously want to be title contenders again. If he´s ok with being a starter in EL & cup games, fine with me. Number of CMs is already limited, we actually need to sign another one or even two in the summer, so losing Jack would only complicate things. Doesn´t seem like any of… Read more »

did anyone make an impact at Atletico, jacks a top, top player, he makes a hell of an impact, more than most of the team

Did he not set up our only goal against them by hanging up a peach of a cross from the left?

Sorry for the totally unrelated comment but given that we need a new keeper, we’re (usually) really cheap when it comes to transfers, and Stoke just got relegated (lol see you later, orcs).. thoughts on Jack Butland?

I am sorry but that is an unrelated comment.

I’d definitely be interested in Butland. Still only 25. (Also, I quite enjoyed him calling his bosses’ transfer strategy “farcical”. Suck it, Stoke!)

Allegri is coming & he’s bringing his best GK with him. Heard rumours that smoke detectors were uninstalled from showers at the Emirates right after the Burnley game.

Would be interesting to know the exact date his contract expires. Is it before or after the world cup.

Ah so it looks like this contract finished halfway through the world cup. Seems that it is totally advantageous for the player.

A Different George
Reply to  Atom

On the international/American feed of the Burnley match, Tony Gale kept saying that England should call Jack, that he brought a creativity and drive to the side that no other England player had. And against Burnley, at least, it looked to be true.

Atom
Reply to  A Different George

He hasn’t played for England under Southgate and pulled out of the squad when he was called up with other fringe players. His form since Christmas has only be ok. It’s going to be extremely hard for Jack to make the squad let alone play

Timsh
Reply to  A Different George

He had some really good moments, the assist for Kola being one example, but it was a weak Burnley team who basically surrendered the midfield. I thought I noticed many lost duels, unnecessarily, and saw him give the ball away quite a lot (and too easily).
Just my subjective opinion though.
I’d love for him to get back to his best.
One of a few who breathes Arsenal..

Despite being the most creative English midfielder out there, Southgate just doesn’t seem to like him (similar boat to Smalling & Walcott), so his World Cup chances seem slim.

At the begining of the season I thought a pay as you play deal was fair, considering his injuries.
After the season he’s had now I think it’s a moot point. I think he’s more than proven his fitness.

I say this as purely opinion and without proof – one has to think that falling to Sam Allardyce’s pressure and making himself move club (to Bournemouth) to get back into the England team was a terrible decision on his part….

Please, no. We already know what we’re getting out of Wilshere. Inconsistency. Injuries. A player who can only fit at the one position that we are already so stocked in we’re moving people off it (CM/CAM). And all this whilst we pay him anywhere between 100K to 125K (or more!) a week? No. Just no. PLEASE, no. We need to be spending those wages on a proper DM, or a proper winger, not another central midfielder who can never be counted upon. A midfielder who really only has a spot in a squad in a top-6 english side because he’s… Read more »

Really the level you want in there is a Fabregas.

Injured less, scores more, assists more. That’s nearer the level we should be looking for. I do think we need a CM in this position which gets a lot more assists to take the weight off Ozil.

Jack Wilshere is a quality player. He’s shown his fitness this season.
With a manager that has more tactical focus and less of the free form express yourself ethos, a la’ AW, Wilshere will again be a top quality player. He didn’t just suddenly turn to shit. And to act as if that’s the case is just silly. I hope he stays.

There is no doubting his ability

What is in doubt is his ability to sustain the level through a season.

Chiefly this is due to his injury/fitness.

Relying on him to stay fit is a risk.

Which is why the contract is set lower to provide room for a back up.

You have to be realistic as well.

He should stay. But he is injury prone so we have to reinforce around him. I feel even if he should stay, we won’t do any harm bringing one more into midfield. Willock is under cooked and AMN is better suited as Rback surrogate pushing Bellerin. Instead we seem to be in a better position with the deep midfield role. Granit has been massively improved and his back up Elneny also progressing well. In the carrier role, Jack excels but Iwobi against Burnley also showed better option from a deeper midfield position. He has been played out wide where he… Read more »

Because he was in another shirt JUST LAST SEASON.

And if Arsenal were anything approaching smart, the next time we see Wilshere in a club shirt will be with a club that does NOT have a cannon on it’s badge.

Fair point but that was just a loan, I meant permanently. Anyway, you have your OPINION and I have mine.

Jacks just got to take a 100k pound a week base wage, live within his means, save his incentives for rainy days.

I dont know how he will survive!