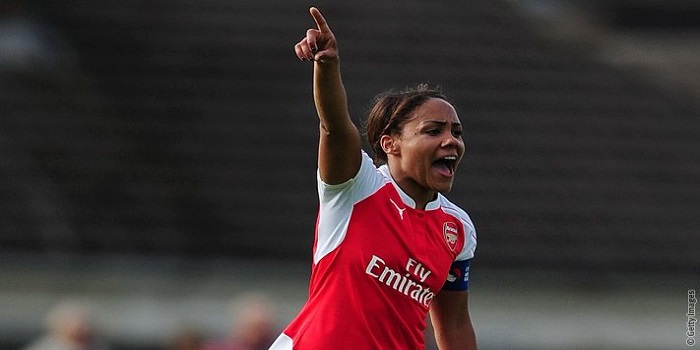 It’s been less than a month since Alex Scott caught up with Arseblog News about her retirement and her glittering career with Arsenal Women, but when we saw that Alex was going to be at the launch of the new away kit in Leicester Square, we couldn’t resist the chance for a catch up.

Tim Stillman spoke to Alex about clearing out her locker at London Colney, Joe Montemurro, Arsenal’s chances of winning the league next season, going to Russia as a pundit for the BBC and the feeling of not having to go back for pre-season.

Alex Scott has not been a professional football player for just under a month when we meet in London’s Leicester Square. But in football terms, she has never been busier. Present for the launch of the new Arsenal away kit, by the time you read this, Alex will have landed in Russia as part of the BBC’s World Cup pundit squadron.

Scott is now free to take up a full-time career in the media, having become a regular feature on shows like Soccer AM, Sky Sports Super Sunday and BBC’s Final Score. But how is she dealing with the prospect of being a pundit for the biggest show on earth in Russia? “Lots of research!” she laughs. “It’s a big task!

“I need to know something about every player because I’ve got a job to do. I get to go to a World Cup and that’s amazing, I understand that, but it’s still a job I have been asked to do. I also understand that I am representing women in football when I do this job alongside male pro pundits, I know there is scrutiny that comes with that,” Alex reflects.

“But I also know I have got to be myself and just enjoy it, because I love football and that needs to come through too. So if I make sure I am as clued up and as knowledgeable as I can be, my love for the game and the World Cup should come through with that.” Scouring World Cup pullout guides isn’t the only activity that has been keeping Alex busy since her last game as a professional in May.

She recently cleared out her locker at London Colney, the final cathartic act that confirmed that she would no longer be a professional footballer. “It was an emotional day, but I’m glad I went in and did it by myself when there was nobody else there,” Alex recalls. “It was just a nice moment to myself really, to pack up my stuff and go while nobody else was there and have that time to myself to reflect on everything.”

So today I have to go and clear out my @ArsenalWFC locker at the training ground??…. pic.twitter.com/ncpLBOm1oq

The 33-year old says that retirement has not yet hit her due to the recess in the women’s football season. “People keep asking me how it feels to be retired and I don’t think it’s really sunk in yet, because it just feels like the off-season. But I think when the girls start going back I think that’s when it’ll hit me, that moment of realisation that I don’t need to go and do pre-season again!” she says, with more than a hint of relief in her voice.

Swedish right-back Jessica Samuelsson was signed last summer in order to ease the transition away from Scott, who has been a fixture in the right-back slot for many years. A painful foot injury kept Samuelsson out for most of her debut season, meaning right midfielder Lisa Evans converted to right-back. Alex was enthused by the work of her successors.

“Jess is an amazing full-back and it was a really unfortunate season for her. Lisa came in and did a job for the team, she played out of position and gave her all in every single game and you have to applaud players like that. I am the first to give her immense credit for that, every team needs players like Lisa.” New coach Joe Montemurro took the decision to convert Evans into a right-back and the effect he had on the rest of the squad was instant.

The Gunners won the Continental Cup and came within 1 point of Champions League qualification, having trailed City in the final European slot by ten points in December. Scott thinks the changes the Australian has made have been obvious and effective. “He’s created a clear philosophy and he’s such a great coach.

“We have a lot of young players with great potential, but they need to be coached and he has really brought that sense of guidance. That’s why you see the likes of Jordan, Leah, the Dutch girls signing new contracts, they all believe in what he’s doing in the next few seasons and that’s hugely exciting for Arsenal.”

Chelsea raised the bar with a deserved domestic double in 2017-18, does Alex think Arsenal can compete for the league title next year? “I think the league will be really exciting next year and that’s really important. It will be a strong, competitive league. Chelsea raised the bar again and it’s for Arsenal and Manchester City to try and step up and meet that standard.

“But it’s not just those teams, the likes of Reading and Birmingham have made the league more competitive too and they deserve huge credit. There will be a really good challenge at the top and I really think Arsenal can challenge- they have every chance of winning the league.” Whilst no longer a member of the playing squad, the girls will have no bigger cheerleader than Alex Scott as they bid for their first title since 2012.

A legend of the game.
Thank you Alex Scott.

How good is she as a pundit? Better than the average Sky Sports pundit out there?

Most of the stuff I’ve seen her doing has been more on the broadcaster/presenter side of things, where she comes across very natural, likeable and knowledgeable. I can see he going down the Gabby Logan path, hopefully not as criminally underused as Gabby is though (to my mind, along with James Richardson, the best sports broadcaster out there). Anyway, I’ve enjoyed her punditry on BBC’s women’s football round up show, however she’s very’s much still an Arsenal employee when doing that – be interesting to hear her when given slightly more free reign. Looking at the BBC pundit line up,… Read more »

Also, as a footballer, she has more titles than the history of Tottenham Hotspur.

Best wishes in all you do, Alex! Media’s lucky to have her.

She’s been one of the best commentators at the WC by a long way – easily the best of the female pundits and vastly better informed than most of the men.