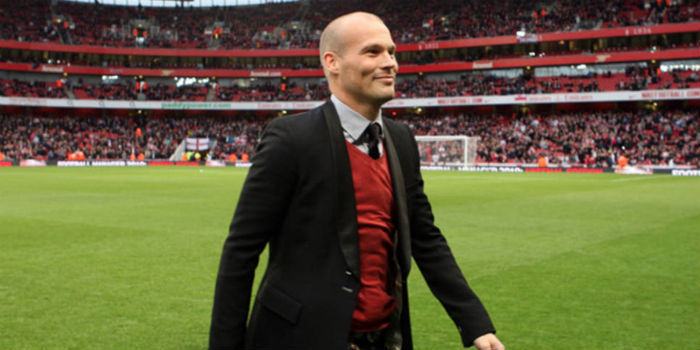 When Freddie Ljungberg left Arsenal to follow Andries Jonker to Wolfsburg, Arsene Wenger made him promise that he’d come back to the club at some point in the future.

“We gave him permission to go, but with a promise that he will come back if there’s a possibility to come back here,” Wenger told Arsenal.com in March 2017.

“Overall, I think it’s part of his education to become a coach, to have this kind of experience. Hopefully we can use that later at Arsenal.”

The Frenchman may have left the building, but the Swede has been good to his word with the club confirming that he’ll be in charge of the Gunners under-23s this year.

The appointment is an exciting one, especially for our new head of the Academy, Per Mertesacker.

“It’s great to have Freddie back at the club,” reflected the BFG. “He brings great footballing experience and the highest possible levels of enthusiasm, energy and encouragement for our young professionals.

“He understands the club’s values and how important it is to give young players the opportunity to grow and develop.

“When Freddie left for Wolfsburg it was with the club’s blessing and with a return to Arsenal some day in mind.

“Everyone knows Freddie loves the club and we look forward to him developing his career with us.”

We’re sure to head more from Freddie about his philosophy, but this snippet from an interview in September 2016 is very interesting.

Speaking to City A.M, he said: “My vision is I want to go as far I possibly can. But I’m trying to earn my stripes and do it the right way.

“I was offered roles as assistant here and assistant there, but I spoke to Arsene about things and it’s important to make your own mistakes and be the one making the decisions.

“Now I have my own staff of six people and I need to manage them and for them to feel like a group pulling in the same direction.

“It’s important to give people ownership and I’m not the headmaster telling people what to do. I do 60 hours a week, just trying to coach, coach, coach and get experience and build from there.”

It certainly looks as though he’s going in the right direction.

I have no idea what he’s like as a coach but he always comes across as a really humble guy.

Ljungberg is in here, Ljungberg with a shot… wiltooooooooord!!!

Wish I coul 10x the thumbs up

Per always comes accross as a pure professional fella, you wouldn’t think it was his first month from a statement like that

What I want to see is a 4-0 thrashing of Chelsea by 11 young kids, all with Red hair

This would make us serious contenders, Get it done Gazidis

Relax mate. This isn’t FIFA that you can overhaul half of the squad in one go and expect us to be ‘serious contenders’. And why on earth would you wanna sell Lacazette, Chambers and Holding without seeing any of them in action under the new manager? And selling Mustafi now would surely result in us incurring a heavy loss on him. Maybe instead, we should wait and see how he performs under Emery before calling for him to be shipped out. And even if we consider your ‘To Do’ list for a moment, you clearly forgot the contact extension for… Read more »

Why stop there? Sell them all…….and the ground why you’re at it.

You should probably read the list of players I had leaving a bit better? Ospina 1yr left on deal and I think we’ll buy a keeper Per has retired Santi already left Wilshere has one foot out the door Jenkinson has Contract until 2020 but has no future with us Asano already gone to Germany? Martinez will likely go out this season The Jeff has a yr left and apparently wants out? Campbell’s future is clearly elsewhere Akpom 1yr left and needs to play Perez doesn’t want to be a squad player Looks like we’ve got Sokratis? and we’re trying… Read more »

Under 23s must be hard to manage.
All the youth talent from your maturest players will be poached by the first team. And you are left with a mixture of players who probably won’t make it, the odd gem slipping through the cracks and players whom might be missing half the season to warm the first team bench.
But good luck Freddie!

well one thing’s for sure if freddie ever becomes our manager. his wingers are going to be masters of late runs into the box! yes, there’s gonna be 2 foxes in the box every game for us!