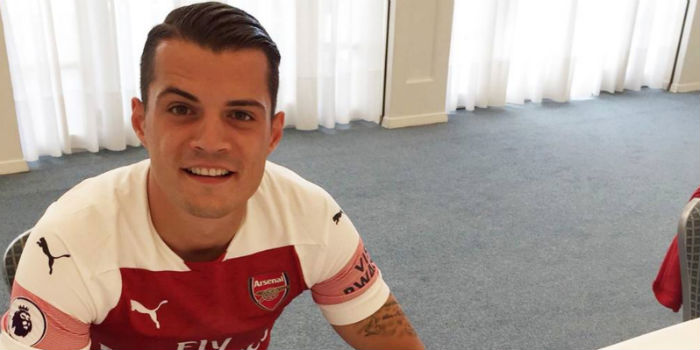 Somewhat out of the blue, Arsenal have confirmed that Granit Xhaka has signed a new deal at the club.

Xhaka’s form may have waxed and waned during his second season at the club, but he was still a regular in the first team appearing in every single Premier League fixture.

New coach Unai Emery is obviously a fan. Despite links with Uruguayan international Lucas Torreira, a player tipped to play at the base of Arsenal’s midfield, the Spaniard had this to say about the Switzerland international penning an extension.

“I’m delighted that Granit has extended his contract with us,” he told Arsenal.com.

“He’s an important member of the squad and is still young so will be able to develop even more.

“I hope he has a successful World Cup with Switzerland and comes back fit and ready for the new season.”

And Xhaka, who signed for the club two years ago from Borussia Moenchengladbach, had this message for the fans: “Hi Gunners, here’s the Granit. I’m happy and I’m proud to sign a new contract here for Arsenal. I hope for good results in the future.”

We here at Arseblog News are certainly looking forward to the improvements Xhaka could make under the stewardship of a coach known for drilling tactical discipline into his players.

Now we can turn our attention to getting Aaron Ramsey to stay. And of course, there’s still the Jack Wilshere situation that needs sorting, one way or another.

I’m chuffed by this signing as he is my favourite player in this team. If we get the pocket size Uruguayan Torreiro we will have balls of steels!! I can see what he is trying to do, he tries to emulate his Parisian team. Torreira for verrati, Xhaka for Thiago Motta. If we can get a dynamiter like Fekir capable of passing players for fun, we’ll have a very competitive team.

Fekir is more a MOC BT than MC

ok, but what does MOC BT mean?

Bit weird when we expect (mainly) brits to understand our native languages, isn’t it?

So yourself don’t even know what it stands for ? Lol

Of course, how foolish of us…

Torreira isn’t Verratti yet coz if Verratti was Uruguayan he would have started for them. I think Emery is building a top four squad, not one that will win the league.

May be think it this way… If Verratti was as good as Torreira, Verratti would be in Russia instead of watching World Cup on the TV.

Thank us swedes (who will amount to absolutely nothing in this tournament) for that!

There’s an ESPN article about the kind of partner Xhaka needs to get out the best out of him. Torreira fits the bill perfectly. I really hope we sign him. Xhaka deserves the armband IMHO. He has real leadership qualities.

xhaka needs a player who can help him out defensively. he is to us what pirlo was to juventus. xhaka like pirlo just cannot do everything alone, particulalry when his midfield partner is at the other end trying to score goals. torreira is the perfect player to help xhaka defensively and let ramsey do his mayhem at the other end. and so our midfied is set for next season

I would like francis coqelin to partner him again 🙂

Some of us are getting a bit carried away about Xhaka it seems. His form improved last season but he was still probably our worst regular starter. Giving him the captaincy would be madness at this point.

I can’t say I’ve ever seen him play but the way the lad Torreira was described on the Arsecast, as a fairly small, stocky, skillful deep lying playmaker who holds the ball well and is regularly fouled reminded me of Santi. If he is half the player Santi was for us we’ll be doing well. Perhaps if he is often deployed at base of a diamond we could see Emry play him at the base, Xhaka to the left, Ramsay to the right and Ozil as the 10. Would require width from fullbacks, or maybe Auba dropping in. Anyhow lets… Read more »

We need better in the middle of the park. Much better.

Think Xhaka is a far better player than we’ve seen so far, like many of our players he’ll benefit from being given specific instructions on what’s expected of him and will be drilled to carry his role out.

Do you think we’re likely to pay €100m for anyone?

No, for sure !! Just dream player in midfielder with Ramsey.
He’s similar to Viera (physical, tall and very skillful).

I never say he was reincarnation or something like that. @@
Take your pills.

When, you saw a player you could compare with a other one if i say Mbappe is similar player than Henry.

It’s not a crime.

I just say, you could found the same quality in this 2 players.

Mbappe was for sure inspire by Henry in this game (saw old video) but they are already differente player and this why they don’t have same career and success.

I’ve seen this sentiment rephrased fairly endlessly over the past few months, and I largely agree with it.

But are you really saying he’s now allowed to say players are “similar to” other players? That seems fairly unreasonable to me.

Not the same mind.

We do need better, but better means a lot more than just buying and selling players

I’m kind of ok with this even though I really don’t know why. He was great in bundesliga and Emery might be the one who can get the best out of him.

He wasn’t played as a DM IN THE Bundesliga and doesn’t for Switzerland either. Hopefully if we sign Torreira we may see even Xhaka even better than he has been

I’m really happy for this news. I think there are a lot of people out there who forget how much did we miss the so called “steel” in the middle a couple of years ago. Our players looked like flies colliding with the window glass when they met with the likes of Mosussa Dembele, Matic, Joe Ladley, Essien etc.
Xhaka is intelligent, a leader, but still young, tough and seems to be absolutely commited.
We should value him a lot!

“Predicted” this after reading Tim Stillman’s latest coloumn. Couldn’t be happier. He’s passionate, and has tons of talent and leadership potential!

Great news ?
Didn’t see this coming as I think he had 3 years left on his deal? Looks like he’s added 2 years until 2023 like Hector
Looks like Rambo’s about to get 5 years as well?

Metronomic, never gets injured, incredible passing range. He was woefully exposed last season having to cover the entire midfield most games. We haven’t seen the best of him yet, mark my words.

Willing to give him the benefit of the doubt and see how he goes under Emery’s stewardship. Paired with Torreira it might ease the defensive pressure off him somewhat. It’s obviously not his strength.

A lot of us were wondering if Xhaka was ready for the culture shock of Emery’s new system, and his reply is: YES!

That’s very encouraging and a nice win for Emery too.

‘Granit Xhaka signs new deal inside hotel events room. This represents a new era for the club, as it announces the retirement of the previously used Tomas Rosicky hotel room, which Gazidis insists has been retired.’

Xhaka new contract? what is this i don’t even

i approve, simply because he referred to himself as “the granit” in the announcement

“He’s an important member of the squad and is still young” so bench for him and the road for Jack?

Give him the armband please. Great character

When he joined, I thought Granit would be a right cunt but he actually seems like a nice lad. I mean cunt as in, still our cunt but still a bit of a cunt, a bit hard. In the right system I think he could be a big player and good luck to him.

I don’t see why people are breaking their heads over how to fit all these players in the team. The answer is simply: you don’t. You play whoever is in form and gives you the best combination on the day against this particular opponent. Also, I don’t expect Ramsey to stay fit and Özil to stay healthy all season, there will be plenty of opportunities for all of them.

While Wenger sought possession, technical play and speed up front, he wanted the solid, defensive rocks in the back of the park. But what about inbetween? Since Flamini and Arteta, Arsenal has not got a distinguishable defensive midfield. Xhaka has suffered under this lack of role definition. I suspect Emery will play 4-3-3, still without a suitable role for the able and brave Granit.

He was already a big player for us but some just don’t want to see that because they don’t like him or they prefer other player. But since he joined us, the team became dependent on him. Every attacking move goes through him. He is the heart of an Arsenal game. When we have the ball in the final third and we are circling it he is the main reason that we are capable of doing. Because of him we can have continuous plays. Oooh and his passes through the middle. That’s why he was playing and will be everytime… Read more »

This proves that no footballer is too busy to sign a contract extension and that contracts can be signed at anytime from anywhere if the player really wants it.

Just read that Wilshere doesn’t fit into Emery’s pressing game, well if he can’t I’m Xhaka wouldn’t as he can’t fucking run!!! Don’t see anything good in him at, just one of Wengers pets