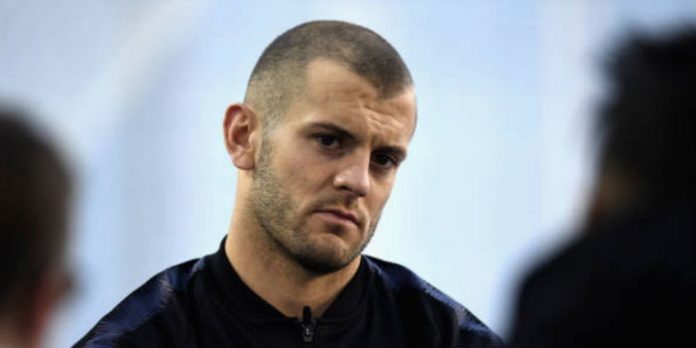 Jack Wilshere has been linked with a move to Fenerbahce, as his contract with Arsenal expires on June 30th.

The midfielder has already announced his intention to depart the club after 17 years of service, and it was thought he’d continue his career in the Premier League.

However, the 26 year old has reportedly been spotted in Istanbul, and linked with all three of the big clubs there: Besiktas, Galatasaray, and Fenerbahce.

The latter are apparently favourites to secure his signing, although as ever we’d urge caution when it comes to transfer stories linking players to Turkish clubs.

Perhaps more than any other country, the press there talk about deals being on the verge of completion, only for nothing to happen. Either there are a lot of last minute snags when it comes to making transfers there, or the transfer tittle-tattle is even more fictitious than it is anywhere else.

It would be a strange move for Wilshere who, despite being left out of the World Cup, still harbours England ambitions, and it would be hard to impress from such a distance.

He was in Berlin this week too, and he has been travelling, so let’s see where this one ends up.

More likely to be out there for a hair transplant

The fact that he’s being linked with all three big Istanbul clubs tells you no one has any actual information and that there is no basis to this story other than he was seen in town. It’s like he was on Merseyside and there was a story “linking” him to both Everton and Liverpool.

Lots of smiling poos for this one.

A move to serie a or la liga would be best for Jack”s career, probably his beat shot to move to a decent technical team that’s competitive in its league, and would give him a chance of making his way back into the England a squad.

But I think we’re sadly going to see him see out his days at a lower premier league club, my money is on him choosing to stay in UK and maybe even stay in London.

Even lower premier league clubs don’t even offer him more than a 1 year contract. I wonder where all the people are that were saying we have to keep him and make him captain otherwise he will go to another big club. Maybe he and them slowly realize that he’s not as attractive as he was 10 years ago. Would be about time, if you ask me. The fact that he seriously requested a guarantee to start at a club like Arsenal with his injury record and with his performances over the last seasons when he hasn’t been injured tells… Read more »

Were you seating at the discussion table when he demanded the guaranty to start games ? Wanting to be important in the manager’s plans and demanding to start games are two différent things. For instance, you could feel Theo wasn’t anymore in Wenger’s plans in his last year but Arsene kept on saying he wanted to keep him.

Why would Arsenal offer him a contract extension worth around 100.000 per week, if he’s not in the managers plans? You realize that that’s pretty unrealistic, right? The manager wanted to keep him but told him that there are players in front of him who have been more consistent than him. He would have needed to fight for a place like every other player at a top club has. But he thought he’s super Jack and asking him to show that he’s better than the others is an insult. So, enjoy life in Istanbul then.

And the Walcott comparison is of course nonsense as Theo had a long term contract when Arsène said that he wants to keep him. That’s what all managers do, when you’re trying to offload a player. As soon as you admit that you want to offload him, the fee drops massively. But if a player is out of contract there’s no reason to say that you want to keep him if you don’t. Cazorla is the best example. Contract ran out. No new offer. That’s it. Wilshere had an offer on the table. And considering how much football he has… Read more »

Are you having a Turkish on us, Blogs??

Take ozil with so we can get dybala and nzonzi

A P
Reply to  Jason

Lobster
Reply to  A P

And then bring back the rest.

I don’t see Wiltshire playing abroad. His game might be well suited to serie A but I don’t know that he’d cope with cultural differences and a new language

If Wiltshire was to go abroad, there’d be a big hole in the country between Surrey and Dorset.

But would it suit Serie A?

Laughing my tits off.
Reply to  Bould's Eyeliner

shmokin'em
Reply to  Laughing my tits off.

ahh i think A P won it

This would not be a good move for Jack if he wants to regain his England place. If it’s a move abroad only Italy, Spain or Germany would do (or PSG). Other than that he can kiss his England career goodbye. I wish him all the best.

Insisting on a loan to Bournemouth was career suicide. That and his ‘other’ interests outside football.

is he still on the coke?

Wish he moves to valencia and plays with coq and Gabriel

These stories hurt me on a very deep level. This is not how the story was supposed to end.

From ospina to jack?

He got two Kids and a year old baby. No way hes going to turkey. CP or WestHam more likely, i guess. Everton seems the most reasonable option if they are still interested imo.

Istanbul is an amazing city. One of the best in the world.

It is, but just has nothing to do with what i said. U dont take your 3 children age 1-6 with their 2 mums out of their familiar surrounding to play abroad. and he won’t leave them. thats why giroud is at stamford bridge.

This is true. One of the best I have had the pleasure of having my Ipad stolen in. But it would be strange if Wilshere, who has two very young kids with different, England-based, mothers and has repeatedly expressed love for his country (which is not a bad thing when coming from a place of love and not hate) would go on and move to a some-what troubled Turkey when he probably has offers from not only that same country but also the capital in which he has lived and raised his children for the best part of his young… Read more »

Got my phone stolen in West London…

Left my wallet in El Segundo.

Can’t see the happening, he’s probably just on holiday there. Two things that seem of paramount importance to Jack are his family and playing for England. Given his current partner is about to have(or has just had?) a baby, and he has two young children from a previous relationship who don’t live with him, I doubt he’s leave England and go to a league that will damage his chances of a recall. Not to say the quality of football is bad, but doubt scouts will be monitoring him. That being said, Jack’s not the sharpest tool in the box, so… Read more »

He’s not the sharpest tool, but those are the ones that usually stay in the shed. He’s not going to Turkey lol.

Jack ohh Jack. WTF are you doing???? I can be guaranteed a starting place at Villa probably but it doesn’t mean shit now does it!!

seriously he rejected arsenal bench for the start for turkey?what is wrong with him?

He is checking which club is going to buy Ospina so he can go somewhere else.