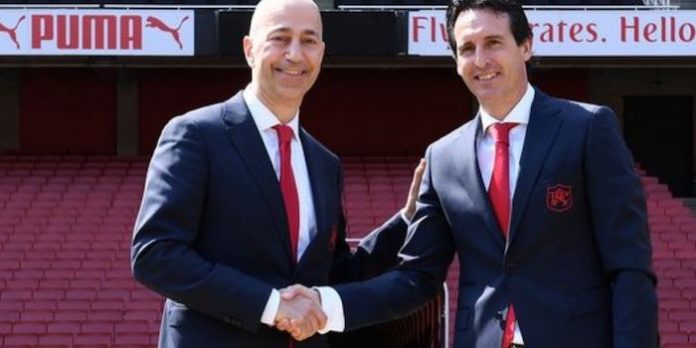 According to The Times (£), Unai Emery agreed to a break clause in his Arsenal contract that can be triggered after two years.

Last week, the 46-year-old put pen-to-paper on a three-year deal at the Emirates, however, it’s claimed Ivan Gazidis put a financial safeguard in place should he wish to end Arsenal’s relationship with the Spaniard prematurely.

In effect, Emery would not be eligible for any compensation should he get dismissed after two seasons.

Apparently, he was happy to accept these terms, which, given he has moved club regularly, isn’t really a surprise.

Arsene Wenger and those in his set-up who’ve had their contracts terminated early are all due to have their salaries paid by the club for this year.

Imo let’s not have hyperlinks for The Times(£) and give the click baiters the clicks they bait.

While I agree in part Blogs is obviously an upstanding bloke and it’s correct that he should reference his sources correctly. I think he can trust us enough to not give money to the times.

On another note..would Arsenal have considered Zidane for the job if they knew he would be available? I am curious to see if he is capable of being a head coach at a club like Arsenal. Or is he destined only for high flying clubs that readily throw money.

Let’s not go down that road. Besides, Zidane is yet to be tested with an above average squad.

A Different George
Reply to  Punter

Zidane never played in England, has no connections to England and, I think, does not speak English. Every source I have seen says that, other than Real Madrid, his only interest in managing is the France national team.

The other side to that, would Real consider Wenger as their manager?

Arteta you have 2 years to prepare then…

Might be nice if Wenger chooses to take his final year’s salary(which of course he doesn’t have to) that he gives it all to the Arsenal foundation.

I suspect that since he stepped down rather than being fired (officially at least), he won’t be due payment for the final year of his contract.

Aye, or just decline to take any more. Of course it may be his right but I can’t imagine he’s strapped for cash and I’m sure there are plenty of offers on the table for him.

He probably is required to pay for his own season ticket. 4m a year. Yeah loose change can go Arsenal Foundation.

Given the esteem he has always held contractual agreements in both for players and for his own, I would be very surprised if he did something like this. The entire purpose is to have an arrangement that works both ways and covers either parties in the case of a premature end. I have no problem with it to be honest. If we expect him to give up his income after being involuntarily let go early without the opportunity to make Following arrangements, then there’s no point in a contract at all other than to set wage. Surely it’s more money… Read more »

Be nice if he gave it to me either.

Disagree, managers must get their severance if they are let go. It can take them up to two years to get another job. Why wouldn’t Conte get severance pay if Abramovitch likes to change managers every two years ?

I wish I were in a job that payed for my gap yah.

Ivan isn’t taking any chances, is he? Smart move.

BTW, Hound: it should be “given he has moved CLUBS regularly”.

This seems reasonable, a season to get his ship in order and then judge him on progress, he now knows if he doesn’t succeed? He’ll be moved on, it’s the type of pressure and urgency that was lacking under Arsene.

Still in the honeymoon period – so I think we would be extending him rather than thinking about cutting our losses in 2 yrs time.

I’ve hopes that with the training, drills, detailed video prep extra, we’ll be performing like we had an extra man on the field – like Wenger’s teams used to in their pomp.

The ball has not been kicked yet people are already talking of when he leaves! I am confident that Emery will do well and probably even outlive Wenger!!
Someone is not even sick yet some people are preparing for his funeral! Football clubs are rich and the people they employ as coaches are rich so compensations are nothing! What is 9m to Arsenal or Wenger?

Actually, to Arsenal £9m is a very useful amount. Don’t mistake club turnover, for cash in the bank.