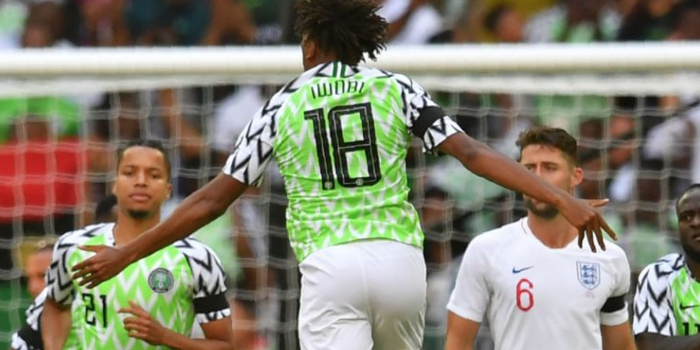 Alex Iwobi and Mesut Ozil were on the scoresheet for their respective countries as a round of international friendlies whet the appetite for the forthcoming World Cup.

Iwobi converted two minutes into the second half as Nigeria, wearing their new snazzy kit, threatened a comeback against England.

Danny Welbeck came on for England in the closing stages but the score remained 2-1 to the Three Lions.

Love To All The Naija Supporters That Came Out To Wembley Today And To All The Nigerian’s Supporting Around The World. Not The Result We Wanted But We Push Forward To Russia ❤️?? pic.twitter.com/GMxIjnHng0

Meanwhile, Austria beat Germany 2-1, their first win over their neighbours for 32 years, despite Mesut Ozil opening the scoring for the reigning World Cup winners.

The Arsenal midfielder took advantage of a poor clearance by Austria goalkeeper Jorg Siebenhandl to calmly slot home on 11 minutes.

The home side hit back in the second half as Martin Hinteregger and Alessandro Schopf engineered a fine comeback on Manuel Neuer’s return to the international scene after injury.

And aside from Kane, all incredibly mediocre footballers.

I have mixed feelings about Sterling. He is certainly a diver, though less so recently, at least in the league. But I don’t want to pile on criticism at a time when he is the target of a clearly racist campaign, led by clearly racist (and anti-football) shitheads.

If any footballer had put a tattoo of a gun on his foot he would have received bad publicity. I deplore racism but I don’t think is the reason in this case

Could you explain putting Sterling’s photo on a story about an ex-footballer turned drug dealer that had nothing to do with him whatsoever? Or mentioning him in a totally unrelated story about stabbings in London (not even shootings, stabbings!) ? People point to the abuse Beckham got but it was never like this

loose_cannon
Reply to  A Different George

100% agree, he’s been targeted by real idiots in the media and I’m glad they’re on the defensive now. I’d like to think we’ve all had enough of this shit now

Wenger once said England would regret not doing more to persuade Iwobi to play for England. He was right. I hope he unlocks all the potential now.

Even with some of the inconsistencies he’s had this season, he could really add qualities to England they don’t have.

It might be easier for him now than if he had the constant scrutiny for “journalists” to deal with!

That Austria defending which created the opportunity for Ozil, reminded of our very own.

Hope it soon becomes a thing of the past with some focused training. Even Mustafi wouldn’t be error prone anymore.

Odion Ighalo struck the post not Iheanacho. The former was later replaced by the later as time wore on.
Nigeria was hopeless throughout the 1st half but regained their composure when a change in formation led to Iwobi being deployed in the heart of midfield with Mikel Obi. He tired out later however as the match drew to a close

You understand that it’s Austria and not Australia don’t you, fat one?

Was Ighalo not Iheanacho