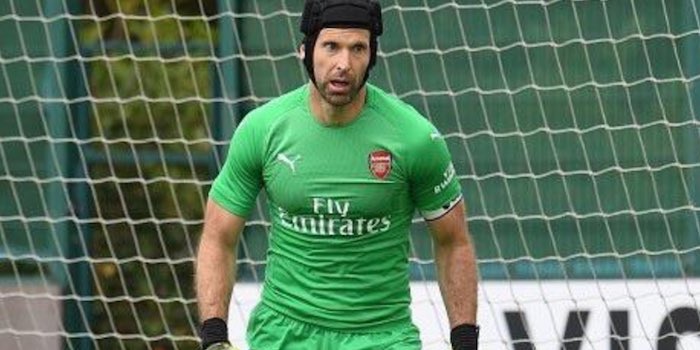 Petr Cech’s agent says there have been no offers for the Arsenal man amid reports linking him with a move back to his former club Chelsea.

The departure of Thibaut Courtois to Real Madrid may well spark a goalkeeper merry-go-round as Maurizio Sarri’s side will need to find a replacement. Not only that, our current squad is currently laden down with keepers and at least one departure is inevitable.

However, Victor Kolar was asked about the situation by ESPN and he insisted that Cech was only thinking about the upcoming season under new boss Unai Emery and that there were no bids on the table from anyone.

“”It is always busy during every transfer window around Petr Cech, as a great Premier League person,” he said.

“However, he maximally focuses on the new season at Arsenal, no specific offer is available.”

It doesn’t necessarily rule out a move completely, but with David Ospina strongly linked with a move to Turkey (we know!), it seems most likely that Cech will fight it out with new signing Bernd Leno for top spot.

Petr’s really been hitting the gym by the looks of things!

It’s actually from lifting and fitting shelves. As Blogs has mentioned previously, Petr runs his own business called “Cech your shelf before you wreck your shelf”

Too Drunk To Be Offside
Reply to  mc1892

Petr does look buffed. However with Leno in there Cech will really be the 2nd choice keeper. Like the signings, absolutely do. However when you are fixing something, fix it all the way. He has brought in just 1 central defender. That means one of Kos or Mustafi starting and thats just nonsense. Those two should be as far from the 1st team (very least regular first team), as possible. Kos was good, but he isn’t and Mustafi is not PL level defender. So just get another defender in and draw a line under defensive stability for good. Okay so… Read more »

Burned LENO
Reply to  Too Drunk To Be Offside

So the hatred to Wenger still there. Is your pain that uncurable? move on! Exciting times ahead!! Or you can keep reminding yourself on and in again how Wenger’s decision has affected your life.

thw14
Reply to  Too Drunk To Be Offside

Reckon the tighter kits have a bit to do with it too, keeper kits were looser than the skin tight outfield kits over the pst few seasons, with the new evoKnit fabric its looks like keepers have been issued with the same tight fit as the other players. But yeah, he’s looking built!

Cech looking pretty beefy there. Probably been hitting the gym in an effort to not fall down the pecking order. Not sure if more strength will help him save shots at his near post though.

my name is bob
Reply to  Wengerballz

I kind of remembered you used expression like Instagram fit whatever which was understood by me as girls doing fitness by other means than lifting weight and showing off on Instagram.

Ur doing good today too…!

It doesn’t make sense that the club give him the number 1 jersey then sell him right away. We’ve been linked with Leno and other goalkeepers for a while before emery came so it’s not like when guardiola came in and shipped Joe Hart out. Honestly I still rate Petr Cech, I feel defensively we were wide open and that left Cech exposed way too often. And when his form dropped (like every player) Wenger never benched him because he was the designated league keeper. It’s normal, and just like many of our players I’m giving them a chance to… Read more »

I read the headline as Agent Cech due to some of the inexplicable goalkeeping errors or Agent Cech who was Petr Cech’s doppelgänger replaced after the head injury. But anyway, I do love him and hope he finds his top form.

At least, Cech is not a Llorius.

You do realise that picture is fake, right?

Didn’t realize till you pointed it out……

Team is very weak defensively especially at Centre back position. The fact that Mustafi and Sokratis are our senior defenders is just unbelievable. Liverpool have gotten Allison while we’re stuck with Leno.
As it is, we’ll finish no higher than 6th place. Emery is not God. He’ll not automatically make Mustafi learn how to read the game

Cheer up, for God’s sake!

Leno is a quality signing, I’m optimistic about him..
As for the defense, It’s all about Emery putting up a solid system at back . because otherwise I fear, individually, our defense is pretty mediocre.
TBH. It’s a good summer comparing to our previous horrible markets.
but compared to other teams… meh.

Better Emery than some Mark Hughes or Moyes’

Apparently, a keeper who is rated as world class by many in Germany isn’t good enough. He has made some mistakes, but so has Neuer. Some really bad ones over the last 2 years.

Not World Class and wasn’t even in the top 5 Bundesliga goalie. Funny how Klopp didn’t even bother looking at him and going for Alisson instead.

Leno was bought by Arsenal before Klopp started looking.

That’s not true. Liverpool have been on a lookout for a keeper for a while. Klopp would’ve gotten Leno easily if he thought he was as great as some think.
Sven is no better at identifying talent than Wenger.

I’ve never seen Leno play so I cannot say whether he is world class or not but to say that Arsenal bought him before Liverpool started looking is ridiculous. They have been looking for a keeper since the end of last season, perhaps even before that.

Also, they bought Alisson who is an excellent keeper I wish we got, but alas.

No, your beloved Klopp got Kaurius instead. He doesn’t have Sven Mislintat to unearth some jems for him anymore so they’ve been splashing some cash.

We need a bit of a clearout there don’t we. I wouldn’t be adverse to losing either of the big names.
Martinez must be ready to either be first team or sold/released now surely. He’s Stuart Tayloring his career away, he’s 25 now!
Macey must be wondering about that fate too

I agree.
He needs to start a real footballing career, regular games and all..
Too old to play in the reserve team. Not THAT good to be a number 1 or 2 in gk choices.

Despite being a bit short, I bet Wolverine would make quite the keeper.

The claws would certainly be an advantage

Hugh Jackman is 6ft 2. He is taller than Ospina..and shorty Jordan Pickford

If Chelsea need a new keeper I hear Loris Karius might be available.

Is it me or does he look quite buff in that pic?? ?

Game over on the transfer front.

Not leaving says agent. He’ll be off to Turkey or somewhere by the end of the month then.

Mostly media manufactured as per usual for gullible ears.

Seems silly to sell him when Leno needs to bed in and indeed prove himself still.

More likely one of Macey or Martinez may be sold or go on loan.

I’d be quite happy to see Petr Cech back at Chelsea. He’s on a big salary and made too many mistakes last season. Emi Martinez needs to be given a chance, we need to look forward and Cech is the past now.

Cech out those guns

If bringing a new keeper can bring back the form of Cech, why not?

Could this “bulking up” actually be because of the kit? This is the first i’ve seen of an Arsenal keeper kit being tight.

I see we are after the Borussia goal keeper, looks like the end for ceck