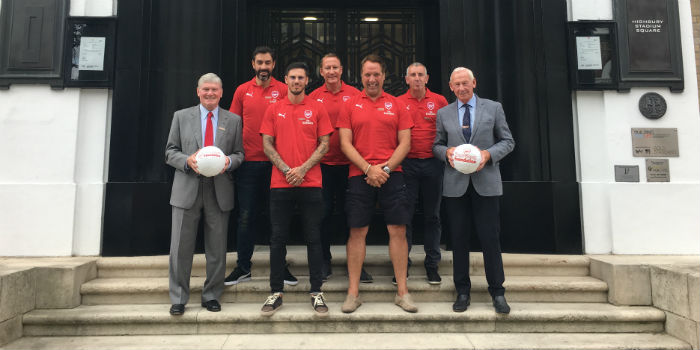 Yeah, we gave the answer away with the headline, didn’t we?

It is indeed, Jeremie Aliadiere.

Yep, Aliadiere, who won a Premier League medal in the 2003/04 season, knows the France youth international from his time in France at Lorient.

The duo crossed paths in the 2016/17 season with the midfielder, then breaking through as a 17-year-old, making a positive impression on the ex-Gunner.

“I played with him a couple of years ago [at Lorient].

“He’s a very good talent, he’s very mature on the pitch. I think Arsenal will do him good in his attitude outside football.

“He’s not ready yet. But I’m sure that working with big players, in a big club will make him realise what professional football is!”

As someone who has also experienced the pressure of walking into a dressing room full of first team stars, Aliadiere also had some advice for the teenager.

“I’d just listen and keep looking at the guys. You learn a lot, not even by talking, but by the way they train, the way they do stuff.

“I feel these days that the new generation of young players, I’m not going to say they are arrogant, but they are more prepared in their mind, they have got a lot of confidence in themselves and that’s what you need.”

So there we go. Head down, work hard and listen Matteo. Jeremie says so.

Jeremie will be playing for the Arsenal Legends when they take on their Real Madrid counterparts at the Emirates on 8 September. The two sides met in the Santiago Bernabeu last month with the likes of Robert Pires, Sol Campbell, Ray Parlour, Anders Limpar, David Seaman stepping out for the Gunners and Raul, Figo, Clarence Seedorf weaving their magic for the Madrid’s Leyendas.

Tickets for the Legends showdown are still available and available from £20. It’s a great day out, particularly if you’re looking to introduce kids of your own to football. Book tickets here.

When Jeremie Aliadiare is moaning about kids these days, i suddenly feel ancient…

Aliadiere was close to being great for us, I was very enthusiastic about him for a while.

Let’s hope Guendouzi crosses the line and makes it, he looks very promising.

“Aliadiere was close to being great for us”

Yeah, genuine talent…injuries really hurt him at the worst time.

Remember though, when Jeremie is talking about Matteo’s attitude outside football and how it can be improved, he played with him 2 years ago. A 17 year old Matteo was probably quite different from the young man he is now

I really wanted him to score that goal at the San Siro. That’s how excited I was seeing a young striker in a team that had all those big names.

The keeper saved but Edu, I think, finished it off. As much as I enjoyed the thrashing, that’s the one low I had in that game. That and nobody punching Vieri’s punchable face.

I felt the same way. I think it was Pires that scored actually… that tuck in. Same way when we played Chelsea in that League Cup final always felt if Arsene took out Walcott and left him on, we would have won and he would have scored.

I am upbeat that finally we have our version of magic hairs….. Am Positive about his success…..

You can’t have such hair and won’t like to make headlines…..

Unfortunately, this is not just the usual old pro to young talent meaningless advice. He is saying that Guendouzi, although mature as a player, had real off the pitch issues. Wasn’t he suspended for several games last season?

This is according to “French Football News:”

“Last season, upon Lorient’s return to Ligue 2, he was a regular in the side until an incident in the dressing room saw him removed at the interval against Valenciennes in November. He didn’t feature for the first team again for nearly three months and was also removed from the first team in the run-in . . .”

aliadiere and pennant. those two.