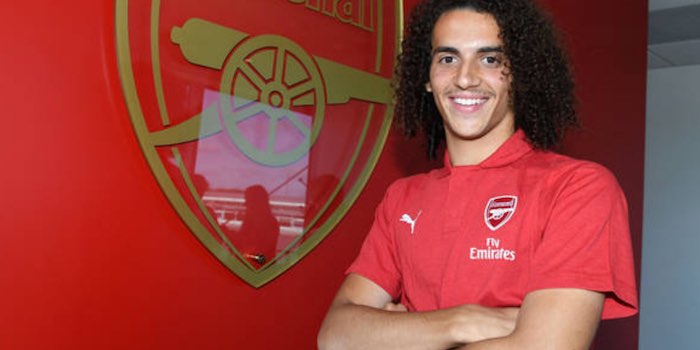 Arsenal have officially confirmed the signing of Matteo Guendouzi, after the earlier news that he had put pen to paper on his deal yesterday.

The 19 year old midfielder joins from Ligue 2 Lorient on a long-term contract for an undisclosed fee – believed to be in the region of €8m, but with much of that fee tied up in various clauses.

Guendouzi made 21 appearances in all competitions last season, and is the young midfield prospect the club have been after all summer.

Initial attempts to bring in Yacin Adli from PSG looked promising before he signed professional terms with the Parisians, but Unai Emery’s knowledge of French football from his time there saw him make personal contact with Guendouzi to convince him to join ahead of other suitors.

Speaking to the official site, the new boy said, “It’s something I’m immensely proud of. Arsenal have always been the team closest to my heart and a side I’ve wanted to join since I was a child.

“It gives me great pride – it’s incredible. I hope I can do great things here. It doesn’t get any better than coming to a club like this, with so much history, like Arsenal.

Arteta reveals how Guendouzi can get back on the boat

Arteta: If the players are willing, they are welcome

We have taken the handbrake off transfers.

For years we speculated on the cause of our transfer tomfoolery, was it Wenger, Stan, the budget, whatever. On the evidence of this efficiently executed window, with all due respect to the Gaffer it appears much of the issues lay with the former manager. In his defense he was often chasing the best players (Mbappe, etc), probably in an effort to re-create the Invincibles. However, this led to unrealistic efforts to compete with the unlimited coffers clubs. It also meant he got in what he saw as the best talent rather than filling positions of need, probably thinking he could… Read more »

One of them is lying!
Reply to  Lone Star Gunner

Let us not assume things based on what we see. We will never no the truth until Wenger publishes that memoirs. T

Heavenly Chapecoense
Reply to  One of them is lying!

Wenger is is never going to criticize people in his memoirs. He will tell more about his philosophy and what football will become in the future. Nothing similar to Rooney was a slow learner.

He might, though, make an exception and say something bad about Mourinho. I hope so.

Jimbo Jones
Reply to  One of them is lying!

Hold on. Seeing (or witnessing evidence) is not the same as assuming. It’s actually the opposite. And what you are saying is to listen to one person’s view of events and not the evidence you see.

That’s some logic you’ve got there.

I’d ask why Gazidis, the guy running the club, didn’t support Wenger in the same way that he has for Emery. If Wenger had a similar backroom staff and expertise he would have done a lot better.

We don’t know why Gazidis didn’t, and can blame Wenger for this (without actually knowing), though he is intelligent and must know that he did better with a David Dein character helping out.

At least it looks much better now.

Maybe. Though the infrastructure didn’t exist then. He didn’t have the support of someone like Sven and Raul.

He didn’t want the support of people like them, think that was one of the main problems over the last few years.

A signing a day, keeps Tottenham away

There are young kids that read this blog. Please censor your language. Tottenh*m is appropriate.

You’re going to hear a lot of that expletive if World Cup is won.

I’m anxiously awaiting the first ever World Cup two-yellow dismissal both from diving.

No problem. It turns out that you can take the players out of Tottenh*m, but you can’t take Tottenh*m out of the players.

The first international sp*rs up. A milestone in football history.

“Arsenal have always been the team closest to my heart and a side I’ve wanted to join since I was a child.”

In terms of young players wanting to join us, what Arsene Wenger added/brought to our club will benefit us for at least a generation. His legacy lives on.

Is that Theo Walcott with a wig?

And a Latin lover mustache

Got to say, we’re doing a good job of looking after the squad. It’s a shame Adli wasn’t brought in because we need to begin looking at replacements for Özil in the long term. Having a young player willing to learn and play second to Mesut during his development was ideal. Emery/Sven/Sannlehi seem aware of how to correctly develop a squad. Phasing out Xhaka now would be a mistake, and instead signs a player capable of doing it in a year or three. Squad development should be smooth evolution and that’s what I see happening here. Do need some width,… Read more »

“Begin looking at replacements for Ozil”

The Jeff has returned.

We’ve signed 2 midfielders who look like they like getting stuck in while looking comfortable in possession. Trying not to get over excited but if everyone performs, we’ve got a strong squad.

mpls
Reply to  Jakob the Swede

Oh I suppose, if needs must.

I expect this to be the last signing (other than Youth players) unless we sell someone like Ramsey or Mustafi. It’s been quiet on the Mustafi/center defender front of late so seems like we are going into the season with the crew we have there now (Papastathopoulos and Mustafi backed up by Mavropanos, Chambers and Holding).

I´m all in giving Mustafi another chance under a different coach and with Torreira in front of him. What worries me more is that from what I understand, Mustafi and Papa are similar CB types prone to similar mistakes. Could they complement each other?

Also, my wild guess is that Chambers could really step it up this year.

I actually have a sneaking suspicion, particularly due to their very similar styles, that Mustafi won’t be paired with Papa-Don’t-Preach.

I suspect Chambers will play the “sit deep” CB, with Big-Papa-Pump playing the aggressive yet senior player.
I’m hoping the days of 2 similar aggressive CBs are now behind us, with one of Mav or Holding being back up to Chambers, and Mustafi the back up to I-Love-It-When-They-Call-Me-Big-Papa.

This makes sense. It’s also possible that after a settling-in period Torreira will be direct competition for Xhaka, instead of the “personal bodyguard” role many assume he was signed to take.

Probably depends on the game and whether we want to counter-attack or dominate possession. If all the players buy in and take the new coaching on board, we’ll be flexible and very unpredictable.

Torreira will not be direct competition for Xhaka. He is a natural DM and this will allow Xhaka to play a deep lying role as he plays for Switzerland

Big question marks on Xhaka and his lack of mobility and how that influences Emery’s pressing tactics though.

No thanks, we have a DM at long last, let him play DM.

I know he has other skills and fluidity confuses opponents and such, just… let’s build on a solid defensive foundation for once. We just end up confusing ourselves otherwise.

There is always the chance Emery adapts Mustafis role but, yeah, I get what you’re saying completely and agree

Nice try, mate. Get back to Chelsea, Sponge Bob. We see through your disguise.

Meanwhile, in an alternate universe, Arsene is still manager and Jean-Michael Seri’s father has said his son is looking forward to being Arsenal’s first signing of the summer

We’ve signed a French teenager, all is right with the world

Kanu not just take a player’s word for it?

Welcome to the Arsenal, Matteo.

I respect a player who interacts with their fans.

Is no one concerned that his name might be slightly too easy to spell for him to fit in comfortably at Arsenal?