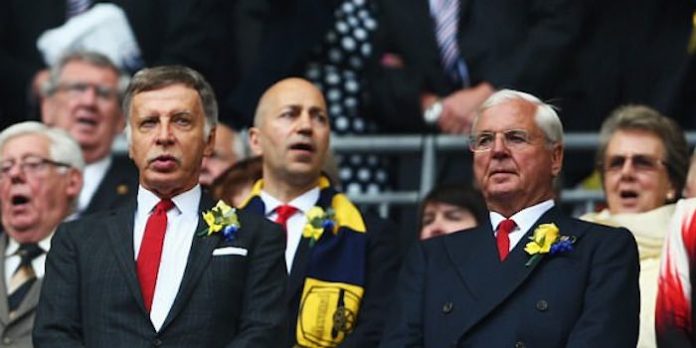 Arsenal have released an official statement to address ongoing rumours involving the future of Ivan Gazidis.

The chief executive has been consistently linked with the same job at AC Milan after they were taken over by an American hedge fund.

There has been no comment from Gazidis himself, but today the club made their position public with a statement from chairman Sir Chips Keswick on the official website.

“We are aware of the speculation surrounding our chief executive Ivan Gazidis. We know he receives many offers from organisations inside and outside the game as he’s a hugely respected figure.

“He has never accepted any of these opportunities and has never spoken about them publicly.

“He has always been fully committed to taking Arsenal forward and is currently working hard in Singapore with our new head coach Unai Emery as we prepare for the new season.”

Earlier in the day, Unai Emery said he expected Gazidis to remain in the job, but this is not the kind of statement that completely closes the lid on the story.

I don’t know. Can you repeat the question?

I would have expected that if there was nothing to the speculation and he were staying then the club should and would have unanimously ruled it out. They have absolutely not done that. They have released a statement that makes you think they have ruled it out but didn’t word it precisely as you might expect. That’s no accident therefore there is substance to it.

He knows its the best time to push for a pay raise. Pretty sure he gets a huge raise ans the story gets blown out of the ocean.

One of them is lying!
Reply to  Dudeé

Exactly that’s what I thought. Leaking information through media so that he gets a pay raise. Nothing more. His stock is as good as it has ever been. Seems like he wants to cash in…

So Arsenal are now aware that their CEO is being linked with another club. But sure he is always getting job offers. And he is working right now.

Which is the sum total of – Arsenal board members read papers while man continues to work at firm for lots of cash.

One of them is lying!
Reply to  Double98

Bring Wenger back as CEO? He was doing Ivan’s job anyway…!

Can’t say I’d be too bothered – seems to have only entered the real-World in the last few months?

I don’t think you get to be CEO at Arsenal unless you are good at what you do. He’s obviously a smart cookie, Cambridge law degree and Oxford Alma Mata. Has had a good career pre Arsenal and with us he’s been moving the pieces on the board into place for a few years and now is in control. It would be disappointing if he left now especially for Milan who are without doubt behind us on the pitch or commercially. Then again he may feel he’s ready for the next challenge having steered Wenger out and setting us up… Read more »

It’s just started showing up in uk press, sky had the story a few hours ago, admittedly attributed to sky Italy. So a big ‘who knows’ for now, does seem like odd timing having now effectively put himself front and centre of the new era. Maybe it was Stan&son who were actually behind everything? (cue the laughter:))

It would be the PERFECT time for an executive to leave–right after taking credit for making a host of institutional changes that most people had seen as inevitable, but before it is possible to be judged on the long-term efficacy of his decisions. This happens regularly, though it is not often the CEO.

Yep. Looks good on the CV

Shall we have Stan go instead?

Yes please. Has he been linked with another club yet. Is Arsenal now aware that Stan is not the man and should/would move on?

What exactly was the point of that statement?

That they’re aware of the rumours?

I’m was a whole lot of nothing

Just get it over with. And lets see if Ramsey falls through the cracks while the decision makers are minding their own agendas.

i find that my life mantra comes in handy with this sort of thing : ” it will probably be fine” . 60% of the time , it works every time.

I think he stays.

its funny how a year or two ago , i wouldn’t have given a tuppenny fuck if he left , now after whats happened over the last 12 months , it would be a kick in the cheeser if he left.

A transfer saga around a CEO. What a time to be alive!

This statement is very shallow and looks like what Ivan himself wrote. Arsenal didn’t really address any rumour here. They simply fuelled it. Watch more speculations come out of this from the press.

No wonder – it’s a statement from Chips.
I’d rather have a bag of chips – at least that’d satisfy me!

Ridiculously vague. When will this club ever learn.

With a statement like that the club are feeding the rumours. Neither he nor the club want to make a positive statement to end the gossip. After all these years of minimum impact maybe he’s suffering from some kind of syndrome and is off to join wenger.

Honestly I don’t think it would be that big a deal if he left anyway. Chief Execs have come and gone at other clubs. Guess what? The clubs survived. The coaches carried on coaching, the players carried on playing. Ivan isn’t even in charge of transfers. He’s decent level PR guy. Plenty of them around. He can be replaced.

I’m not his biggest fan, but the problem is the club is actually build around Ivan now in the footballing context, he’s not just a PR guy. Sanllehi, Mislintat & Burgess are all very much his people and he’s pretty much running the show with that team (Emery certainly feels a rung down). Chief Execs at clubs don’t usually wield as much power as he does, and the club is effectively being built around his vision right now, not Stan’s or the board’s. If Ivan leaves, Josh Kroenke becomes the new Chief Exec, and I don’t envisage anything like as… Read more »

“He’s a hugely respected figure” : Well, those words are on the internet, so I guess it’s true. It’s come as a shock to me though, cos I think he’s an ineffectual knob-end.

Pfff. Might just as well say “Ivan has been tempted by the sausage and mash at the canteen every day, but has always chosen to have something else.”

Thanks for clearing that up, Chipsy. Geez…..Maybe it will boil down to whether the Milan wants to pay more than the outrageous amount he already makes at Arsenal. Or maybe he’ll get the raise he’s obviously digging for. Better to do it now, than when Kroenke owns all the shares and brings in the Denver Nuggets crew to run things. (SHUDDER)

I am glad we cleared that up

I guess there’s not too much the club can do if he does want to leave. Generally speaking I’m not fussed about him staying, but the timing is a bit shite isn’t it?